Following public hearings by the Committee of the IOM (1991) and by the Senate Committee on Veterans Affairs, the IOM Committee issued a seminal report, Veterans at Risk: The Health Effects of Mustard Gas and Lewisite (1993) which revealed that by the time WW II ended approximately 60,000 U.S. servicemen had been used as human subjects in chemical defense research. At least 4,000 of these had been used to test high concentrations of two chemical agents, mustard gas and lewisite (arsenic).

Citing the scope of serious ethical problems, the Report acknowledges that the Committee went beyond its restricted charge: 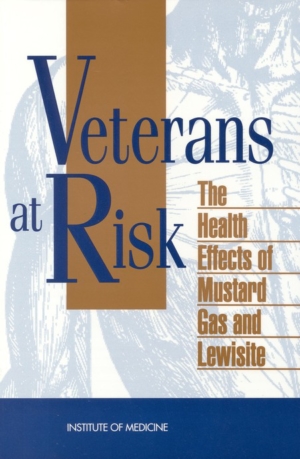 “As the full scope of the WWII testing protocols was revealed, compelling ethical questions emerged. At times, it seemed as if every new discovery only posed more questions. As the study progressed, the bits and pieces of information finally coalesced into a picture of abuse and neglect that was impossible for the committee to ignore. One of the first discoveries was that the end point of all the WWII mustard agent and Lewisite experiments was tissue injury — from mild skin burns to severe, and widespread, skin burns that took more than a month to heal. The chamber and field tests were actually called “man-break” tests.” (IOM, 1993)

“In the chamber tests, human subjects were required to enter gas chambers repeatedly for an hour or more per trial, until, after a number of trials, their skin showed evidence of chemical burns (erythema) — an indication that the agents were penetrating the protective clothing. In the field tests, the agents were dropped over large tracts of land, and human subjects, wearing clothing being tested, were sent into those areas for varying amounts of time. Penetration of the agents through the clothing was assessed in these tests in the same manner as in the chamber tests.”

“The levels of exposure to mustard agents or Lewisite experienced by the human subjects may have been much higher than inferred in the summaries of the gas chamber and field tests. . . The human subjects had experienced a wide range of exposures to mustard agents or Lewisite, from mild [ ] to quite severe (repeated gas chamber trials, sometimes without protective clothing).”

The IOM committee expressed dismay at the lack of medical follow-up care — even as it was documented that numerous subjects suffered severe injuries that required up to a month of treatment. In February, 1945, the chief of the Chemical Corps’ Medical Division sent letters to more than a thousand soldiers, commending them for “subjecting themselves to pain, discomfort, and possible permanent injury for the advancement of research in protection of our armed forces.”

Constance Pechura of the Institute of Medicine told a congressional committee last week that official documents made clear that ‘the end point of the gas-chamber experiments was tissue injury’. Glenn Jenkins, who was locked in the Anacostia gas chamber when he was 17 years old, says that even now ‘some of my neighbours just don’t believe an American government would have done this to its own people’. (Read Patrick Cockburn. US Navy Tested Mustard Gas on Its Own Sailors, The Independent, March 1993)

Following these hearings, two reports were issued at the request of the Senate Committee on Veterans’ Affairs: the General Accounting Office (now, Government Accountability Office, GAO) report, “Veterans Disability” (1993) and a report by the committee’s staff (1994). The GAO confirmed that there were at least three secret chemical experiments conducted between 1942 and 1975: mustard and lewisite experiments conducted by the Navy and the Army during World War II; and experiments with incapacitating agents such as nerve agents and their antidotes tests; and psychoactive-chemical experiment aimed at causing brain dysfunction during the Cold War era.

Posted in US Soldiers - Guinea Pigs
Scroll To Top