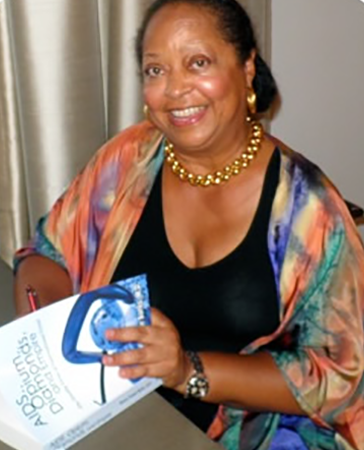 Nancy Banks, MD is a Harvard-trained medical doctor who is board certified in obstetrics/gynecology.

In her senior year at Harvard, she was awarded a scholarship from the American College of Surgeons to study surgery and tropical medicine at the Benin Medical College in Nigeria.

She then completed her internship and residency in general surgery and obstetrics and gynecology at St. Luke’s –Columbia Presbyterian Hospital, and at Mt. Sinai Hospital / Medical Center. Dr. Banks was a Galloway Fellow in gynecological oncology at the Memorial Sloan Kettering Cancer Center. And she also earned an MBA in finance from Pace University.

Dr. Nancy Banks stirred up a hornet’s nest with her book AIDS, Opium, Diamonds and Empire: the Deadly Virus of International Greed (2010), by focusing on the underlying economic controlling factors. She drew connections between global market strategies, the destruction of national sovereignty by the process of globalization, and the health consequences of a neo-Darwinian philosophy. 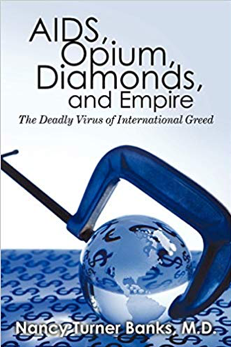 “The real forces of evil wage a financial war. The dark princes of debt finance have gained leverage over every important social, economic, and political institution – including the health care delivery system…The people of the United States have been so mired in a sea of conflicting interests that while they quibble and harp at each other about being on the right or left, the country’s wealth is being shifted away from them to the top 1 percent of the population by tax schemes, legal loopholes, and outright fraud that is endorsed by both major political parties.

They seethe in frustration as cities drown, bridges crumble, electricity grids fail, as drugs and illegal immigrants, refugees from the economic policies implemented by their government, flood their communities, as their jobs get shipped offshore, and their children die in foreign lands while the oil revenue that was promised to pay for this grand folly is siphoned off un-metered and unpaid for by oil cartels with soaring profits. Former head of the Federal Reserve, Alan Greenspan, stated unequivocally that the Iraq War was waged for oil, and it barely created a whisper among the chattering class. A country without a vision is a country without a future!”

Dr. Banks identified the sole goal of the medical-pharmaceutical- industrial complex; which is to create profit-generating products, not to conquer disease. Her book is a social history that points to historical events that contributed to the HIV/AIDS crisis. Dr. Banks fully recognizes that:

“when you take on “Big Science” you take on a ruthless self-serving industry less concerned with scientific ethics and more about building profits and forging consensus. For some ideological, and for others financial motives are the primer. But the smoking gun of any scientific fraud is the quality (or lack thereof) of the empirical evidence.”

Dr. Banks cites molecular biologist Professor Peter Duesberg and Dr. Luc Montagnier, the French virologist who was the co-discoverer of HIV. Both of these towering scientists had won international acclaim for their groundbreaking scientific work; Dr. Duesberg was acclaimed for his cancer research, and Dr. Montagnier received the Nobel Prize in the Physiology of Medicine. Both of these scientists dissented from the mainstream view about the causal relationship of HIV to AIDS.  Dr. Banks noted that infectious diseases, by their nature, will spread through the population without paying attention to age, gender, sexual orientation or social status. However, Dr. Luc Montagnier stated in an interview: “I believe we can be exposed to HIV many times without being chronically infected, our immune system will get rid of the virus within a few weeks, if you have a good immune system.”

Dr. Banks doesn’t blink; she compares the backlash against honest physicians, scientists and concerned parents who question vaccine safety, to the inquisition during the Middle Ages when millions of people were executed by the Church – among them, were midwives and herbal healers —  because Church dogma proclaimed these people sinful “heretics.”

“If you look at the ingredients of vaccines you’ll find that they have mercury, and they have aluminum and the vaccines are polluted with other kinds of viruses and the vaccines are grown, sometimes on human tissue. So these are vaccines that have elements that are neurotoxic and then of course they have other elements that can set up autoimmune reactions. So those are the kinds of things that we’re seeing in the children; we are seeing autoimmune reactions.”

On a personal level, Dr. Banks was challenged with two back-to-back life-threatening illnesses that led her to realize that in order to heal, she would have to look outside of her own discipline of allopathic medicine. This was her personal “dark night of the soul” awakening that gave her the courage to question the fundamental assumptions and mythologies of western medicine. Her passion has become supporting others in their search for health knowledge that is both consonant with the laws of nature and life-affirming.