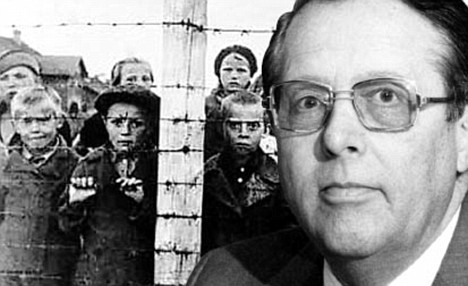 The World Medical Association — which ostensibly had been founded in 1947 in an effort to distance the profession from Nazi medical crimes — elected a Nazi medical criminal, Dr. Hans Joachim Sewering, as its president. The vote was 53 to 9, with 9 abstentions.

Sewering was a former SS officer and member of the Nazi party who was accused of signing the transfer of more than 900 children with disabilities to their death at the Eglfing-Haar extermination center.

Prior to his election, Sewering held numerous positions of leadership in professional medical associations: In 1955 he was elected president of the Bavarian Medical Association. In 1959, he joined the World Medical Association and became its treasurer for 20 years (Lederer, 2007).

In 1968, Sewering was appointed honorary professor of social medicine and medical law at the Technical University of Munich.

From 1973 to 1978 he was president of the German Medical Association (the Bundesärztekammer, BAK) — even as articles about his actions during the Nazi reign appeared in Der Spiegel. In 1985, the Munich Technical University awarded him an honorary doctorate.

So in 1992, it appeared as though Sewering reached the apex of his career in medicine when he became the President-elect of the World Medical Association. However, international press coverage resulted in a firestorm of protests from German, U.S., Canadian and Israeli physicians and medical scholars.

The most incriminating testimony came from four Catholic nuns from the Sanatorium who broke their vow of silence about what had transpired at the Schononbrunn Sanatorium, and at last came forward, and testified. They refuted Sewering’s claimed innocence. What’s more, their testimony was followed by a statement issued by Cardinal Karl Ratzinger of the Munich diocese (later elected Pope Benedict XVI) stating that “it was crystal-clear that the transport (signed by Sewering) occurred in the course of so-called euthanasia.” And yet, Sewering escaped prosecution:

“this time because as a senator in the Bavarian parliament, he was guaranteed immunity from crimes against humanity. While he was forced to resign his position as president-elect of the WMA on January 23, 1993, he was honoured four months later by the German Medical Association, who made him a life member of their board of trustees.”
(Andrew Roberts. Medal for Murder: Germany Honours Nazi SS Doctor, The Daily Mail, 2008)

Sewering was forced to resign as president-elect . The scandal tarnished the American Medical Association whose delegation to the WMA consisted of four AMA executives; these AMA officers had acknowledged having known about damaging evidence relating to Sewering’s past before his election — and they did nothing to prevent it. (Kater. Medicine and Modernity, 2002).

In 1994, the U.S. Dept. of Justice acknowledged that Sewering was on the “watch list” and could not enter the U.S. In 1995, Sen. Rick Santorum expressed outrage at the German government for failing to prosecute Dr. Sewering for the abomination of sending 900 children to be starved to death because of their disabilities. (U.S. Cong. Record 104th Cong, July 12, 1995)

In 1996, on the occasion of his 80th birthday, the Bavarian Medical Association honored him. In a letter to the Deutsche Arzteblatt (German Medical Journal), published a letter from Professor William E Seidelman of Toronto pointing out that the editors had ignored Sewering’s membership of the SS and the Nazi party and that

“in 1943, Prof Sewering worked as a physician at the Schönbrunn institution for the disabled where, on October 26 of that year, he signed an order transferring 14-year-old Babette Fröwis to the ‘euthanasia’ centre at Eglfing-Haar where, three weeks later, she died from the effects of starvation and a purposeful overdose of Phenobarbital”. (Childs, The Independent, 2010)

In May 2008, the 25,000 members of the German Federation of Internal Medicine awarded Sewering the Günther-Budelmann medal, its highest award, for services to the nation’s health system.

“The prize’s citation is stomach-churning in its hypocrisy, stating that it is being presented for ‘unequalled services in the cause of freedom of the practice and the independence of the medical profession and to the nation’s health system’. Wolfgang Wesiack, the federation’s president, has refused to speak about Sewering’s Nazi past, except to say of the prize: ‘He deserved it.'” (The Daily Mail, 2008)

The extraordinary political career of Hans Joachim Sewering within both German professional medical associations and the World Medical Association is a testament to the enduring culture of elitism and arrogance of those self-serving political medical bodies whose physician members disdain the moral values of Hippocratic medicine.

When he died, in 2010, the German Medical Association (BAK) praised Sewering omitting any reference to his Nazi crimes. An open letter by 81 German medical historians and doctors protested and criticized the present and previous presidents of the GMA for their sanitizing Hans Sewering’s past.