The Corpses of Hitler’s Victims Haunt German and Austrian Medicine

Academic institutions and professional medical bodies have steadfastly refused to face up to the enormous moral culpability that academic medical researchers and institutions bear for the human carnage and suffering they caused during the Nazi era. They have avoided confronting the scientific and personal legacy of their activities and active participation in murderous medicine. That wall of silence is being challenged by a growing body of scholarship by several leading medical historians.

The role of German anatomists in the murderous Nazi operations wasn’t acknowledged or even talked about until the last two decades, despite the fact that they were recipients of large quantities of murdered human body parts. Dr. Hildebrandt told Slate in 2013, “The long-buried history of Nazi-era anatomy is surfacing now because of a burst of investigations by the third postwar generation who want to memorialize the victims.”

For two decades, German students and scholars outside of Germany have waged moral confrontations demanding full investigations to determine the existence of victims’ remains at anatomic institutions. And they demand disclosure of the identities of the victims, how they died, so that the memory of their lives is preserved. 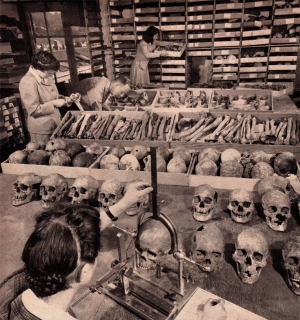 In the late 1980s second generation post-war German medical students and a few researchers started asking questions about the conduct of anatomists under Hitler. They asked about the status of the slides and tissue samples they’d left behind as teaching materials — their queries mostly ran into a wall of individual and institutional denial. The professors scolded the students for raising issues that will “dirty the nest.”

But by 1988, the third generation of German medical students and several international researchers began to confront the issue more vigorously. Götz Aly, a German historian, journalist, and author of numerous books about various facets of the Holocaust, persisted until he finally gained access to the specimen collection at the Max Planck Institute where he identified T-4 euthanasia victims. He then pushed for the burial of those human remains. As Dr. Sabine Hilderbrandt stated (in Slate, 2013)”Basically,[pullquote] what it took was for all the involved anatomists and their pupils to die before anyone was willing to touch the subject.”[/pullquote]

At about the same time, Gerrit Hohendorf (now a professor at the Technical University of Munich) was a student at the University of Heidelberg, where who helped “organize a student lecture series on our own with no support by the medical faculty or teachers of medicine. We heard something about children being euthanized at the Heidelberg psychiatric hospital, so we went into the hospital and asked the professors.”

This new wave of attention crested at the University of Tübingen
Following the revelation in 1988, that Tübingen’s Institute of Anatomy had received the cadavers of 400 victims of Nazi executions, students demanded an inquiry; which sparked national press attention; thereupon the University of Tübingen issued a public apology and set up a commission to investigate. All suspect specimens and those of uncertain origin were buried in a special section of the Tubingen cemetery where in 1990 a commemorative ceremony was held. The Tübingen University action served as a model for other schools. In 1990: The Max Planck Society admitted that its collection contained the tissue of euthanasia victims — including 700 children. In 1992, the German government ordered all state universities to investigate their anatomical collections — only 14 of 31 have done so.

In 1995, the University of Vienna Medical School received its first shock waves when the Chair of its own prestigious Physical Medicine and Rehabilitation, Dr. Edzard Ernst, wrote an article in the Annals of Internal Medicine (1995) revealing that the source of the “models” for the Pernkopf Atlas of Human Anatomy were corpses of executed persons and included body parts from children murdered in a Viennese hospital. (Seidelman, 1999).

Dr. William Seidelman, the eminent Canadian Holocaust scholar has been in the forefront of this campaign for full disclosure, stepped on many toes when he stated categorically the discomforting truth subsequently confirmed by Dr. Sabine Hildebrandt (Read Eduard Pernkopf’s Atlas of Topographical and Applied Human Anatomy — “a tainted beauty”.2013):

[pullquote]“Every captive of the Nazi state was considered to be a potential subject of inhuman research experiments.” [/pullquote] Leading doctors and professors at world-renowned academic institutions took an active part in ruthless abuse and exploitation — some experimented on helpless victims while they were still alive; others exploited the bodies of victims of Nazi terror. The execution chambers throughout the Third Reich’s prisons were virtual slaughterhouses. In 1942, the Reich Ministry of Justice issued a directive (contrary to existing German law): the corpses of executed Poles and Jews would “. . . not be released for burial by the relatives.”

Their destination would be a university anatomical institute.

“Every university anatomical institute in Germany — and probably Austria — was the recipient of the cadavers of victims of Nazi terror; in particular, political victims executed by the Gestapo. . . The human specimens are tangible evidence of the role played by medicine and medical science in the crimes of the Nazi regime.” (Seidelman. Medicine and Murder, 1999)

1993: Traveling German Exhibition: “The Value of the Human Being: Medicine in Germany 1918–1945.” The exhibit traveled from Berlin to Boston, the National Museum of Health and Medicine in Washington DC, San Francisco, and the University of Toronto for 2 weeks. It was not widely viewed; it sent a warning to the medical profession of what happens when medicine diverges from its main focus — which is treating and valuing individual patients.

Whenever doctors rationalize the sacrifice of an individual for “the greater good of society” doctors are positioned to become “licensed murderers and publicly hired torturers.” (Michael OReilly. Canadian Medical Association Journal, 1993)

A symposium at the University of Vienna called “Medicine Under Scrutiny” (in 1999) was a turning point for German and Austrian universities; the time had come to recognize and assess their anatomists’ complicity in murderous activities during the Nazi regime. The rector of the university announced the appointment of a committee to investigate the Institute of Anatomy to assess the use of bodies from execution chambers and to determine their extant remains. He indicated that when he had asked the faculty of medicine about the use of murdered bodies, he realized they’d lied.” The investigation determined that at least 1,377 bodies of persons guillotined or shot by the Gestapo at a rifle range had been delivered to the Anatomy Institute. Other universities followed suit, though only 14 of 31 universities conducted full investigations.

In 2001, Hubert Markl, president of the Max Planck Society, gave a landmark speech about the wartime culpability of the society’s doctors and scientists. Markl acknowledged that Josef Mengele, the notorious Nazi doctor who selected people for life or death at Auschwitz, did his perverse research on twins with his mentor, an anthropologist at the Kaiser Wilhelm Institute (the precursor to the Max Planck Society). In attendance were a few survivors of Mengele’s experiments. Markl apologized to them personally.

“It is a painful way to meet the past when one personally stands face to face with the victims of these crimes. I beg you, the surviving victims, from the bottom of my heart to forgive those who, no matter what their reasons, failed to ask you themselves.”

2004–2005: A group of anatomists and historians investigated the origin of dead bodies received by the anatomical institute of the University of Jena in the Third Reich. Between 1933 and 1945, the institute received the bodies of 203 executed persons, most of whom had been sentenced to death for minor offenses or opposition to National Socialist (NS) regulations. The institute also received about 200 bodies of possible “euthanasia” victims from nearby nursing homes and mental institutions, and several dozen dead bodies of forced laborers from Eastern Europe.

A review by Dr. Hildebrandt (2006) verified the criminal sources for Pernkopf’s corpses that he used for teaching and the Atlas illustrations between 1938 and 1945. The corpses included about 7,000 bodies of fetuses and children, 772 of these had been murdered at Spiegelgrund children’s ward of the Vienna Psychiatric Hospital; and at least 1,377 bodies of executed persons (guillotined or shot by the Gestapo at a rifle range): “the influx of bodies from executions increased so much during the N[azi] regime that the rooms of the anatomy institute were sometimes overfilled and executions had to be postponed because of this.” However, she notes that the true numbers are not known because of incomplete documentation. Read Eduard Pernkopf’s Atlas of Topographical and Applied Human Anatomy — “a tainted beauty”.

2004: Deadly Medicine: Creating the Master Race at at the Holocaust Museum in Washington D.C.  This exhibit for the first time since the museum’s opening in 1980, addressed the role of the eugenics movement that swept Western medicine and underpinned Nazi Medical atrocities. (Physician and Scientist Profiles; Survivor Testimony — Oral History).

“Hardly any other topic from the history of the concentration camps has, on the one hand, been kept so quiet and repressed and is, on the other hand, so tainted with prejudice and distortion, as the forced prostitution of female camp inmates for male camp inmates by the SS.”

In 2010, the first public symposium on anatomy during the Third Reich was convened by Germany’s prestigious International Anatomical Society, Anatomische Gesellschaft, founded in 1886. On this occasion, the Society acknowledged its involvement in criminal research and published a list of German anatomists who had been persecuted during the Nazi regime. Dr. Seidelman, whose relentless quest for disclosure of research atrocities under the Third Reich, stated: “I never expected to see this reckoning in my lifetime.”

But as Dr. Hildebrandt (who has recently moved from the University of Michigan to Harvard Medical School) stated in her Grant Proposal, 2012:

“Still lacking are more in-depth studies of perpetrators and victims. These victims include not only those [Nazi] victims who were dissected in anatomical departments, but also the anatomists whose careers were disrupted by Nazi policies.”

Anatomy in the Third Reich Edited by Sabine Hildebrandt and Christoph Redies, Special issue of Annals of Anatomy , 2012 documented the use of bodies of executed persons at the universities of Glesem. Gottingen, Halle/Sale, Jena and Wurzburg.

In 2013, BBC News reported about Dr. Hildebradt’s research revelations. She stated that “German post-war anatomy was built in part on the bodies of victims. It’s time to return the names to the numbers — to give faces and biographies to the so far anonymous victims of anatomy in the Third Reich in order to remember and honour their humanity and the iniquities they had to endure.” Her article, the Women on Stieve’s List: Victims of National Socialism Whose Bodies Were Used for Anatomical Research, Clinical Anatomy, 2013