Dr. Walter Sonntag, the senior doctor at Ravensbrück, had trained to be a dentist, but switched to medicine when he realized the career opportunities for doctors who were given a prominent role in Hitler’s racial cleansing program. Sonntag joined the Nazi Party and the SS along with the other medical students, and with the majority of German medical doctors. Sarah Helm, a British journalist quotes from Sonntag’s 1939 thesis on “social medicine” noting that his sister had developed multiple sclerosis, a chronic genetic disease:

“Reproduction by the genetically ill and asocial elements of a people will inevitably lead to the deterioration of the whole nation. Sterilising undesirables and eliminating them as far as possible is therefore a humanitarian project that offers protection to the more worthy parts of society.” (Helm. Ravensbrück: Life and Death in Hitler’s Concentration Camp, 2015)

Sonntag had conducted deadly mustard-gas experiments in which he applied lethal bacteria to the skin of healthy inmates at Sachsenhausen. SS chief Heinrich Himmler then charged him with finding a preventive treatment for venereal diseases to protect Nazi SS and soldiers. Sonntag took sadistic pleasure in causing women pain.

“On his first day [at Ravensbrück] they all watched as he passed down the line of waiting women, kicking the weakest with his boots, or lashing out with his stick at any cries of pain. What horrified the women was not only his brutality; it was the smile on his face.” (Helm, Ravensbrück 2015) 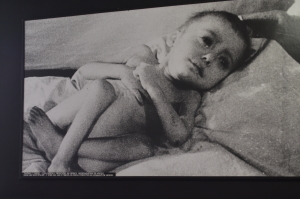 He kept no records of the abominable experiments he performed, but everyone knew he was injecting syphilis germs into women’s spinal cord. His guinea pigs were chosen at random. Many women were forcibly sterilized, and many were forced to undergo abortions up to eight months.  In the last year there were so many pregnancies, not all were aborted. This resulted in babies being born and left to starve; within eight months 600 babies died.

Women and children used as experimental animals in Sterilization experiments
In the Nazi quest for perfecting mass sterilization methods, gynecologist Carl Clauberg conducted experiments at several concentration camps; at Auschwitz his victims were mostly on Jewish women;  at Ravensbrück he sterilized some 120 to 240 Sinti and Roma Gypsy women and young girls within four days. Many of the young girls died from the procedure.

The doctors at Ravensbrück practiced various sterilization techniques and other appalling experiments on Gypsy children, many of who died. Two Gypsy children aged nine and eleven who Sonntag subjected to a sterilization experiment were found dead in their bed shortly after the operation. Sonntag was also known to secretly murder patients at the camp hospital using petrol injections. (Helm, 2015)

Dr Herta Oberheuser also administered lethal injections when she felt like it; in one instance she killed a teenager simply for wetting her bed. She was described as tall and blonde with a predilection for see through blouses and bangles.  (Helm. Giggling Over Genocide, Daily Mail, 2015) She murdered healthy children with injections using a mixture of petroleum oil and the barbiturate evipan, then removed their limbs and vital organs which were shipped to Berlin for study. The particular fatal injection ensured prolonged agony before death: “the time from the injection to death was between three and five minutes, with the person being fully conscious until the last moment.” (Wikipedia)

Dr. Herta Oberheuser was a complicit assistant in the surgical atrocities conducted by Dr. Karl Gebhardt. and was the only female doctor tried at the Doctors Trial in Nuremberg. When asked during her cross examination, why she conducted the experiments, she replied “Only Polish nationals were used in the experiments.” She claimed ignorance about the the petroleum injections she delivered that killed people. She insisted that she gave “medical help for suffering patients in the throes of death.” Oberheuser was a proud committed Nazi; she said of her service:

Dr. Fritz Fischer was Dr. Karl Gebhardt’s the first assistant who carried out in the surgical experiments which he described in detail in his Affidavit submitted at his trial at Nuremberg.

Elisabeth Marschall was the head nurse at the hospital. Her duties included selecting prisoners for execution, overseeing medical experiments, and selecting which prisoners would be shipped to Auschwitz. Her plump frame and cheery face gave her a cozy, maternal appearance as she cuddled and cooed over any babies born in the camp. Yet she stole large quantities of powdered milk, semolina and porridge from Red Cross parcels for herself while those same babies starved to death. (Giggling Over Genocide, Daily Mail, 2015) At the Hamburg Ravensbrück Trials, she was found guilty and sentenced to death.

Euthanasia Action 14F13 metastasized to the Final Solution
Sonderbehandlung—“special treatment” – the SS euphemism for extermination was coded “14f” to denote prisoners who died in the camps. Subdivision “14f14” meant death by executions and “14f8” suicides. The new code“14f13” denoted death by gassing.

On July 31, 1941, Hermann Göring directed Reinhardt Heydrich, head of the mobile killing squads, to begin planning the implementation of die Endlösung der Judenfrage — the Final Solution to the Jewish Problem. The decision was to systematically kill the Jews of Europe “irrespective of geographic borders” including Jews in North Africa – thereby setting in motion the machinery of the Holocaust. No other groups were included in the decision. The procedural implementation decisions were made at the Wannsee Conference in January 1942.

“The Third Reich’s genocidal policies toward the Jews have to be understood as part of a larger policy aimed at the ethnic reshaping of Europe. Nevertheless, Jews occupied a special place in the exterminatory mentality of Hitler and the Nazis; Jews were perceived not as a regional obstacle but as a global threat. They were treated as inferior beings like insects, but were perceived as powerful enemies, whose very existence anywhere posed a terrible danger to the future of the German race.

Heinrich Himmler, the architect and implementer of The Final Solution, even traveled to Finland to persuade the government to surrender that country’s tiny Jewish population; a population that posed no economic or strategic threat of any kind for Germany.” (Saul Friedlander. Years of Extermination, 2007)

Radical change in selection process for 14f13 at Ravensbrück
Dr. Friedrich Wilhelm Heinrich Mennecke, a psychiatrist in the T4 killing operation – euphemistically called “mercy killing” or “euthanasia”—had selected within four days, 250 to 400 men at Sachsenhausen prison to be executed using gas under code “14f13.” In August 1941, the T4 euthanasia killings at mental hospitals in Germany were briefly suspended due to adverse public opinion. Himmler was concerned that the gassing of women on German territory would not be acceptable to the public. Therefore, the implementation was a tightly kept secret.

The name Ravensbrück was omitted from the documents to doctors in the “medical commissions” and camp doctors instructing them on the selection criteria and how to proceed.  Himmler who was fully involved in the decision to proceed with the Final Solution, ordered Mennecke in November, 1941, to proceed with selections at Ravensbrück; he changed the required number to be selected from 259 women to 2,000 women. At that time, the camp held 6,544 prisoners, thus one third were to be exterminated. Mennecke was taken aback; he did not know about the decision to gas all the Jews within Germany’s grasp.

“The intense secrecy, caused confusion at Ravensbrück and obscured the true course of events after the war. Even today many details of this early phase of the Nazi genocide would be undocumented, had it not been for the fact that Dr. Friedrich Mennecke recorded in minute detail what happened in letters – sometimes two a day – to his wife.” (Helm. Ravensbrück, 2015; excerpts)

At the Nuremberg Doctors Trials, Mennecke testified in detail that when he was suddenly instructed to select prisoners on “political and racial grounds” in addition to “medical” grounds,” which had until then, been invoked as justification for “mercy killing,” he realized hat his diagnoses were a waste of time: the numbers were fixed in Berlin; and he understood that: “From that moment on Jews were not medically examined but just added to the selection list for being Jews…there were new instructions not to bother with examinations of Jewish prisoners.” No other groups were included in the directive.  (Helm Ravensbrück, excerpt, 2015)

For two months after Mennecke had submitted his list of selected victims, there was intense fear and speculation among all prisoners; especially the Jewish women. Their fears were justified; the first mass transport for extermination took place on February 4, 1942, at 2 AM.

“The first to be marched out of their block were the Jewish women. They joined the criminal block en route to the bathhouse where they were joined with a group of Jehova’s Witnesses and “asocials.” And then all but one patient inside the Revier [hospital] were herded out, some brutally dragged from their beds.” (Helm, excerpts, 2015)

The last indignity these women faced at Ravensbrück was to be stripped and body-searched by a guard; they then changed into civilian clothes and were herded into trucks. No one at the camp knew the destination of these transports from Ravensbrück. Unbeknown to anyone, this mass murder mission was carried out soon after the decision about The Final Solution had been taken; to gas all the Jews of Europe. This extermination transport)was a test run to determine whether mass executions could be done on German soil, within close proximity of Ravensbrück, without public detection. Soon after this first transport, for several weeks, 10 other convoys from Ravensbrück headed for gas chambers.

After the first transports, there was no predictable pattern to the selections. Until the day they were driven to their deaths, nearly all the women had been doing forced labor. It is estimated that 1,600 women were murdered during those weeks. The prisoners at the camp were exceedingly anxious to find out where the gassing took place. Rumors persisted that they were taken to Buch, a hospital near Berlin where medical experimentation was being conducted. Helm notes:

“To this day there is much that is not understood about Buch, particularly in relation to Nazi medical experimentation…there. It cannot be ruled out that some of the victims were trucked to Buch, either for experimentation or in transit, before being taken on for gassing elsewhere.”

Himmler declares Ravensbrück Judenfrei
After the last thousand Jewish women were sent to Auschwitz in late 1942, Himmler declared Ravensbrück Judenfrei (free of Jews). However, that changed. In September 1943, a large transport of Jewish women arrived at Ravensbrück from Auschwitz. They were deemed physically capable of work; they were “privileged German Jews” having either mixed lineage or Aryan husbands. Two other shipments of physically fit Jewish women arrived in October and December of 1943; among them were Turkish and Spanish Jews who were allowed to bring their children with them, as Turkey and Spain were allied with Germany.

In 1944, Hungarian Jewish women who escaped the earlier roundups arrived at the camp which by then was critically overcrowded. The women were isolated in a tent in the freezing cold with no food, no water, no blankets and no toilet. They succumbed and died. In 1945, as the Allies were approaching, and Auschwitz was being evacuated, a large number of Jewish women were transported to Ravensbrück to be gassed.

The fact that “Ravensbrück had been built as nothing short of an enormous death machine where everything was designed to kill…” is demonstrable in tens of thousands of corpses. Yet, Helm reports,