Bonding between women was of utmost importance for their survival in the camp. The women at Ravensbrück formed close bonds (mostly) within their ethnic groups, creating surrogate “families” who nurtured one another and protected the weak and vulnerable. Women who had strong moral, political and/ or religious beliefs bonded with like-minded women and protected one another, creating the sense of group solidarity which improved their chances for survival.

Those who have interviewed Ravensbrück survivors, studied the archival chronicles, the eye witness reports and testimonies come away impressed with how the women whose bodies and souls were racked with pain; their humanity under constant assault, nevertheless maintained their humanity, by acts of kindness, generosity, resistance, and solidarity with their comrades. 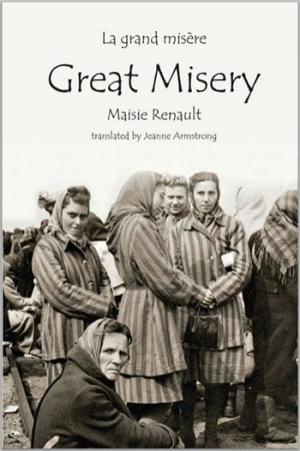 Maisie Renault a French resistance fighter describes relationships among her small group of French comrades in the camp in her 1948 account of her incarceration at Ravensbrück, La Grande Misère (translated The Great Misery, 2013) composed of former Libération Nord members and two Belgian women who supported one another by forming a surrogate family. Maisie attributed her survival to support she received from this group. One night she was feeling sick and went to the lavatories. Suddenly it seemed to her that she might die right there when Lucienne Dixon arrived to help her stand up and return to her bed. Maisie commented on this incident, “I truly believe that that night she saved my life by her presence alone.” (Jeanne Armstrong. Community, Survival and Witnessing in Ravensbruck, 2011)

Micheline Maurel, a literature teacher from Toulon, who has written books and poetry about Ravensbrück. In her prize-winning memoir published in 1950s, remembered how a stranger’s kindness helped her find strength.

“Once when the prisoners were being served soup with semolina — which, unlike the usual cabbage soup, she could stomach — another prisoner approached her and said:

‘Micheline I think this is a soup you can eat. Here, take mine too.’ She emptied her bowl into mine and went without food that day. The woman knew Micheline’s name but Micheline didn’t know hers — only that she was a French prostitute, a group that kept to themselves.” (Helm, 2015)

Rochelle Saidel (2004) and Sarah Helm (2015) describe numerous examples of comradeship among prisoners – including those who were put in positions of authority – as Block elder – who helped newcomers into “families.” Women sought refuge within camp “families” who did their best to protect their prison “family” members. Some risked their own life by hiding a “family” member who feared being selected for transport to death. At Ravensbrück there was a significant minority of lesbians among the guards and among the inmates who also formed close friendships and alliances. Given the tight sleeping quarters – 3 or more women shared one bed – in many cases these friendships became sexual. 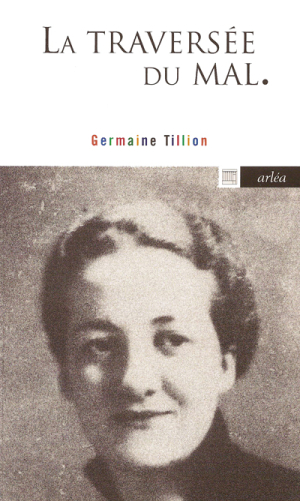 French ethnologist / anthropologist at the Musée de l’Homme, Germaine Tillion, was interned at Ravensbrück for 14 months during which she secretly recorded the identities of the principal SS personnel; which she coded as recipes and hid the information until she was rescued by the Swedish Red Cross in 1945. Tillion also smuggled a roll of film showing the deformed legs of the Polish young women (“rabbits”) who had been subjected to abominable experiments. Tillion’s published eye witness report of daily life at the camp, including information about Jewish inmates was published in French in 1946; it serves as the earliest detailed eyewitness accounts.

She described Ravensbrück as: “a world of horror that was a world of contradictions: more terrifying than the visions of Dante, more absurd than a game of snakes and ladders.” She wrote a comic operetta to keep up morale; but stated that while she was there, she lost the will to live. In her memoir, published soon after her release, she painstakingly analyzed the strange society which she and her fellow prisoners inhabited. Others created art as gifts to friends but also as a form of resistance that recorded the horrors of the camp. And Lauren Wolfe describes how women would keep their spirits up by sharing memories of their normal lives, telling stories to distract their minds from the horror:

“Birthdays and holidays were marked whenever possible…exhausted, cold and hungry the women would talk endlessly about the food they longed for, about family meals they had shared and the dishes they planned to make if they survived the war….. each woman would share recipes in a paradoxical effort to stave off hunger.“ (Women Under Siege, 2010)

Almost all women who wrote about how women prisoners coped with starvation –which every inamate suffered terribly from — noted that women spent much time describing how they had prepared food specialties.  Saidel describes how numerous women of various nationalities prepared recipe “books” which were carefully compiled; sewn with needle and thread – that they had exchanged for food. One woman later explained, “If and when you are hungry you must all the time think of food.”

Understandably, most chroniclers avoid describing the less inspiring aspects of life under violent, terrifying conditions of deprivation.  Frank Furedi, whose mother lived to tell about the appalling conditions, mentions what should come as no surprise, given human nature. Some inmates behaved shamefully; fighting and competing for food. And some harbored intense dislike for certain ethnic groups:

“…inmates frequently squabbled, fought among themselves and competed for food and privileges. While some prisoners behaved shamefully, even collaborating in the running of the camp, others did their utmost to protect as many of their fellow prisoners as they could… Squabbles coexisted, then, with spontaneous acts of solidarity and defiance.” (Frank Furedi. The Truth About the Nazi Camp My Mum Was In, 2015)

What is surprising is the survival of moral values and examples of courage, generosity and even instances of literal self-sacrifice.

One form of resistance was underground education programs organized by prisoners for their fellow inmates; they held language, history and geography classes, improvised theater and music and they shared recipes, preparing imaginary meals. All national groups had some sort of program. The most extensive were among the Polish women — 75% to 80% were political prisoners — who conducted various high school level classes taught by experienced teachers

Despite attempts to isolate the camp, a few relatively privileged prisoners managed to maintain intermittent correspondence with friends and family. Some even passed on information to underground networks. Those who had been active in political and cultural resistance organizations provided leadership;; organizing secret “political meetings” to exchange news while walking; they held language, history and geography classes. They improvised theater and music performances and they shared recipes, preparing imaginary meals. Saidel indicates that Jewish recipe “books” were salvaged.

In the early stages of Ravensbrück there was even a secret newspaper. (Jack Morrison 2000) Some women kept secret records of what the Nazis were doing. Some even engaged in resistance actions that risked their lives. For example, those who worked in the administrative offices sometimes falsified lists for food rations, substituting names of laborers with those who were too sick and would have starved without a ration. Once they even succeeded in destroying the list of names, of women selected for the gas chamber.(Fiorello’s Sister: Gemma La Guardia Gluck, 1961; 2007) 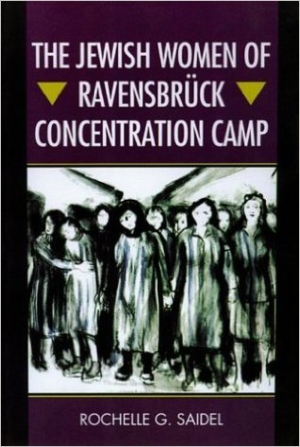 Rochelle Saidel describes numerous moral humanitarian actions by women at the camp. She cites two nuns — Elisabeth Skobzkoff (Mother Maria) and Mother Superior Èlise Rivet — each of who made the ultimate sacrifice; they changed places with two who were condemned to the gas chamber. Saidel indicates that 860 Dutch women who were at the camp because of their resistance activities: “They not only hid Jews but transported underground leaflets, and helped allied pilots who landed by parachute after their planes were shot down over the Netherlands.” (Jewish Women of Ravensbrück, 2004)

One of the heroines Helm describes is the inspirational Yevgenia Lazarevna Klemm, unofficial leader of 500 women from the Soviet Red Army. She had been imprisoned in a Soviet Gulag before she was deported to Ravensbrück where she mothered the teenagers, maintained discipline of “her” women whom she urged to learn German in order to survive. A camp survivor told Helm, “She was the reason we survived.” The “Red Army girls” were highly educated, including a large proportion of doctors and health professionals. They were active in resistance efforts and even engaged in secret Communist underground activities in the camp. They sabotaged the equipment they were forced to assemble for the German army, including electrical parts for the V1 and V2 military rockets at the Siemens Factory. Vera Vanchenko, a Red Army officer, was caught, tortured and executed for sabotaging bullets meant for German guns.

The forgotten short-lived Jewish heroines at Ravensbrück
Whereas the resistance efforts by non-Jewish women inmates at Ravensbrück, have been documented by survivors of the various national groups – primarily, French, Polish, German, Russian and Dutch – strangely, the resistance efforts of Jewish women at Ravensbrück – whose fate and early extermination was determined by the yellow triangle identifying them as Jewish – have been largely neglected by traditional male Holocaust historians. Until Rochelle Saidel embarked on a project in 1995 at the 50th anniversary, to tell the story of the Jewish women of Ravensbrück, none of the studies devoted to the camp address the presence of Jewish women within the camp. Their agonizing stories come to light in her book, The Jewish Women of Ravensbrück Concentration Camp (2005) 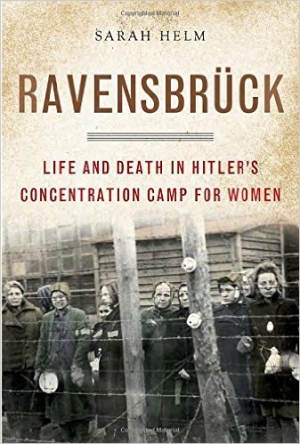 For example, Käthe Leichter, who came from a prominent well-to do Jewish Viennese family, was the foremost socialist women’s organizer in “Red Vienna” during the interwar years. She was an author, with a doctorate in political economy; and directed women’s affairs for the Viennese Chamber of Workers (Arbeiterkammer). She was imprisoned in 1938, and later deported to Ravensbrück where she wrote a play that resulted in six weeks in the bunker.  In January of 1942, together with other Jewish prisoners, she was sent on a transport to an unknown destination, where she was murdered soon thereafter. An urn with her ashes was sent back to Vienna, along with her last letter to her children.

“Once an inmate escaped and was missing for three days. The SS guards made everyone in the escapee’s barracks stand at attention for all three days without food. When the Germans did find the woman, they beat her mercilessly. They then threw her back in her barracks, where the fellow inmates beat her to death.” (Jack Morrison. Ravensbrück: Everyday Life in a Women’s Concentration Camp, 2000)

Elsa Krug, a prostitute from Düsseldorf who was given the designation of a kapo charged with supervising other inmates, ran a work gang in the camp’s kitchen supply cellar, from where she smuggled food for others. When she disobeyed orders to beat her fellow inmates she received the ultimate punishment; she was selected to be gassed. But before her death she and several other women who were transported to their death, scribbled the destination of their transport inside the lining of the garment they were wearing to inform their comrades who would be receiving the garments for re-use.

The story of the 74 “rabbits” encapsulates the worst medical atrocities of Ravensbrück, but also the indomitable human spirit and determination of these young women to survive, not to be annihilated without a trace. Not only did 63 of the 74 women survive the horrific surgical bone fracturing experiments that left them crippled and in chronic pain; they managed to conceal their mutilated legs during selections for death. In 1944, when the SS sought to kill the “rabbits” to remove the evidence of the diabolical experiments, the entire camp conspired to keep them hidden. [Read next post]