The Nazi “children’s euthanasia” program was a unique phenomenon in the history of humankind; psychiatrists and pediatricians targeted and systematically murdered disabled children as the means for realizing a social Darwinist utopia. Before a child was killed, the approval of three doctors, Werner Catel, Hans Heinze and Ernst Wenzler was required. (Read more at AHRP: Medicalized Mass Murder, Children First) The German Society of Pediatrics was silent about the medical murders during the years 1933 to 1945; and the board demonstrated its contempt for the child victims when it unanimously accepted into its membership ranks former Nazi pediatricians “as well as protagonists of Nazi euthanasia.” By the mid-1950s none of the main culprits of child murder remained in prison; they had all been granted early release. Whereas the victims remained anonymous forgotten non-persons. (Lutz Kaelber, Child Murder in Nazi Germany, Societies, 2012)

A public scandal triggered by a series of 60 articles in Der Spiegel in the 1960s exposed several doctors involved in the Aktion T4 medical murder program; most prominent among them was Werner Catel, MD, Professor of Neurology and Psychiatry at the University of Leipzig who was a DGK member. Dr. Rudolf Degkwitz a pediatrician who is recognized for his work on the measles vaccine, though at first enthusiastic, became increasingly critical of the Nazi regime. In 1948, Dr. Degkwitz emigrated to the US. In 1960, he pressed criminal charges against Catel bringing about a criminal prosecution. The press coverage, more than anything else, put the pressure on the state, which had defended Catel. (Sascha Topp. “Shifting Cultures of Memory” in Silence, Scapegoats, Self-Reflection: The Shadow of Nazi Medical Crimes, 2015) 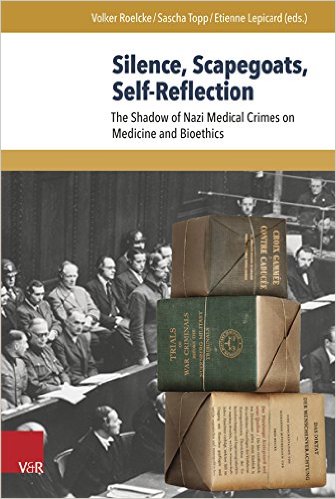 In 1961, Catel publicly proposed to legalize “limited euthanasia” of severely malformed children – whom he described as “infantile idiots” or “monsters.” He proposed euthanasia for adults with terminal mental illnesses as well. Catel recommended that a three-man expert panel be set up in order to decide which “monsters” to “annihilate” – a striking analogy to the Committee charged with the same authority under the Third Reich. The proposed committee consisted of a public health officer, a medical specialist (presumably a pediatrician) and a judge. Catel’s proposal polarized opinions in the field of medical ethics. Whereas the correspondence he received documents the broad approval of fellow physicians; pediatricians disagreed. (Sascha Topp, 2015)

The Catel controversy erupted at the time of the Contergan/thalidomide catastrophe when thousands of German babies were born malformed due to thalidomide. (Read more at AHRP From Holocaust to Thalidomide, 2014) Dr. Theodor Hellbrügge, a pediatrician who lectured and wrote about Nazi medical crimes, concluded, “as a medical problem, the elimination of ‘unworthy life’ was by no means exclusively an issue of the National Socialist era.”

During the 1980s, second-generation German academics were (for the most part) reluctant to probe into the activities of senior medical scientists during the Nazi period. However, opposition within the medical profession was gaining momentum prompted by student revolts who demanded a debate about the role of the medical profession. In 1982, the Historical Committee of Pediatricians was formed to examine the profession during the Nazi era.

In the 1990s third-generation German medical students cracked the wall of silence and pried open the human specimens in the medical school cellars; and in 1994, “Pediatrics in Germany 1918 – 1945” – the first historical symposium ever to debate the role of pediatricians during the Nazi era. (Sascha Topp, 2015) In 1995, Henry Friedlander published The Origins of Nazi Genocide: From Euthanasia to the Final Solution, which includes a list of participating medical centers in T-4 euthanasia as well as a list of some of the key physicians involved. (Those lists are reprinted in Appendix 1, 2 in Lindert et al. How Ethics Failed, Public Health Review, 2013)