Jews and other devalued and dehumanized groups were regarded as fitting “material” for medical and biological experiments that were forbidden under Germany’s Guidelines for Human Experimentation (1931) (details above). These included handicapped persons and numerous ethnic and groups who were expelled from German society. Foremost among these were Jews, who were systematically stripped of their rights as citizens and through a series of German Racial Hygiene laws, they were stripped of their property, expelled from schools, forbidden to use telephones, banned from public transportation, exempted from labor safety legislation, allowed limited rations, subjected to forced labor and tax laws, restricted to ghettoes, and beginning in 1941, Jews were required to wear a Star of David on their clothing to readily identify them. These measures were all backed by the academic medical and scientific community.

Jews were relegated to sub-human pariah status; equated with vermin that carry contagion and must be exterminated; an identification number tattooed on their skin defined their degraded status. Their expulsion from the human race prepared the ground for subjecting them to diabolical medical experiments, encouraging cruelty for its own sake, and setting in motion their mass extermination: Holocaust.

The heinous experiments conducted on concentration camp prisoners were designed to:

An estimated 23,000 persons were the victims of these experiments. (Sebine Hildebrandt. Transgression: Anatomical Research in National Socialism. In Human Subjects Research After the Holocaust, Ed. by Sheldon Rubenfeld and Susan Benedict, 2014) 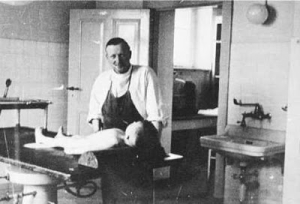 The diabolical medical experiments conducted on concentration camp prisoners were (for the most part) not committed by uneducated Nazi barbarians; they were committed by and on behalf of leading physicians at renowned medical research institutes who enthusiastically joined the Nazi party; exploited the mass murder programs as an opportunity to conduct experiments that could not otherwise be done; then after the murder of the subjects, they plundered the remains to acquire “specimens” for further research at university departments of anatomy, pathology and neuropathology.

During the war, they published the results of these experiments, hardly concealing their nature — even identifying them as “terminal experiments.” After the war — until 1985 — physicians continued to utilize their booty of “human specimens” for research and to publish their findings. In 1989, the existence of these “specimens” was exposed; German universities and national research institutes rushed to bury some of the specimens. (Harmut Hanauske-Abel. Not a Slippery Slope or Sudden Subversion: German Medicine and National Socialism in 1933, BMJ, 1996)