“Eugenic Extermination”
“Children’s euthanasia” a murderous program, unique in the history of mankind, that targeted infants, children, and young adults as the means for actualizing a social Darwinist vision of society. By systematically murdering children, scientists sought to eradicate pathological phenotype — “eugenic extermination.” Not until 2000 did historians document 30 killing stations, misleadingly labeled Kinderfachabteilungen (“special children’s wards”) which were established in existing medical or other care facilities. The first victims of secret, systematic medical mass murder were handicapped German children who were murdered by physicians and nurses. “Physicians’ participation was always both voluntary and deliberate, they retained ultimate authority to order or decline a killing once authorized from Berlin.” (Lutz Kaelber. Child Murder in Nazi Germany: The Memory of Nazi Medical Crimes and Commemoration of Children’s Euthanasia Victims at Two FAcilities (Eichberg, Kalmenhof), Societies, 2012)

The mass murder of handicapped German children and adults was planned, organized, and implemented by the secret Reich Committee under the Office of the Führer which was the preeminent body dealing with racial hygiene and population policy in Nazi Germany. Its members belonged to the elite within the medical establishment. The SS had no part in the T4 so called “euthanasia” action. It was entirely carried out by health care professionals who facilitated the conditions for medical murder and heinous experiments; health care professionals implemented and actively took part in every phase of medical mass murder. The selection phase began with a State decree ordering doctors and midwives to fill out a questionnaire reporting all newborn infants and young children under age 3, who showed signs of specific mental or physical abnormalities or handicaps.

The questionnaire, couched in language using euphemisms to create the impression that the objective was a scientific survey to aid children with serious medical conditions, was essentially used as a death warrant. 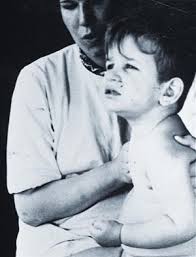 The children were selected on the basis of those questionnaires by three “medical experts” (psychiatrists) — Dr. Hans Heinze, Dr. Ernst Wentzer, and Dr. Werner Catel — who decided which children to kill. The program was expanded to include children under age 17. They were secretly transported to one of 22 killing wards where 27 doctors murdered the children. (Friedlander. Origins of Nazi Genocide, Table 3-4)

Professor Henry Friedlander points out that from the moment the questionnaires were filed, throughout the entire process — of selection, observation, evaluation, killing, and dissection — the children were wards of the Reich Committee. Once a child was assigned for euthanasia, it was virtually impossible for a parent to intervene.

The first children’s killing ward was set up at Brandenburg-Gorden by Heinze, and served as a model for others; the killing method used was primarily overdose injections of barbiturates, morphine, or the antiepileptic drug Luminal. In some cases,  exhaust fumes from trucks were used to gas groups of patients. Some handicapped children were taken from parents against their will and “cared for” in a boarding facility. The parents would be told later that thei child died from natural causes; they were never told that doctors had murdered their child.

In 1940, a group of 59 children who had been labeled for “research potential” were transferred from the Brandenburg-Goren state asylum to the Brandenburg killing center’s gas chamber to facilitate an examination of their brains immediately after killing them. Extensive records of these “research children” have been found, including the medical histories, neurological examination, the findings of repeated painful experimental encephalograms and prognosis for intellectual development.

These children were probably the first group of Nazi victims who were chosen by physicians for a scientific interest and killed “on order.” The determination of possible hereditary transmission of each illness was to be correlated with postmortem examination of their brain. (Sally Rogow. Hitler’s Unwanted Children: Children With Disabilities, 1998) [Sally was a Board member of the Alliance for Human Research Protection until her death, Dec. 21, 2012.]

Indeed, the brains of 40 of these children were removed personally by Dr. Julius Hallervorden, head of Neuropathology of the Kaiser-Wilhelm Institute for Brain Research. (Hohendorf. Medical Research and National Socialist Euthanasia, 2014) The academic medical community exploited the sudden availability of human subjects slated for extermination. Every human captive of the Nazi state was considered to be a potential subject for inhumane research. Every victim murdered in a “euthanasia” killing center, a concentration/death camp, or Gestapo execution chamber was a potential object for experimental exploitation.

Hallervorden accumulated a large collection of these murdered children’s brains. He then seized the opportunity afforded by the T-4 mass murder of psychiatric patients at Brandenburg:

“I heard they were going to do that and so I went up to them: ‘Look here now, boys, if you are going to kill all these people at least take the brains out so that the material can be utilized’. . . . There was wonderful material among these brains, beautiful mental defectives. . . . They asked me: ‘How many can you examine?’ and so I told them an unlimited number — the more the better. . . . They came bringing them in like the delivery van from the furniture company. The Public Ambulance Society brought the brains in batches of 150–250 at a time. Where these brains came from and how they came to me was really none of my business.” (Harmut Hanauske-Abel. Not a Slippery Slope or Sudden Subversion: German Medicine and National Socialism in 1933, BMJ, 1996)

His Nazi past notwithstanding, Julius Hallervorden is considered one of the major founders of child neurology. A glowing biography of Hallervorden in the textbook Founders of Child Neurology (1990), edited by Stephen Ashwal, MD, fails to even hint at Hallervorden’s exploitation of mass murder and his aggressive acquisition of murdered children’s and adult patients’ brains. The biography was written by Dr. Edward P Richardson, a distinguished faculty member of Harvard Medical School and Massachusetts General Hospital for 50 years.

Psychiatrist Dr. Hermann Pfannmüller, medical director of Eglfing-Haar, a children’s killing center, developed a special slow starvation diet for “useless eaters”; providing him with an opportunity to observe and collect data on the effects of malnourishment and progressive starvation. An eye witness testified that: Pfannmüller pulled up a limp, emaciated child who was near death, and explained to visitors that rather than wasting medication on “these creatures”

“we use a more natural method of starvation: We do not kill . . . with poison, injections, etc. . . . No, our method is much simpler, and more natural, as you see.” He further explained that “the sudden withdrawal of food was not employed, rather gradual decrease of the rations.” (Michael Greger, MD. Nazi Doctors)

The parents were deceived; they were told the children would receive advanced therapeutic interventions; those who resisted were pressured, coerced and threatened with loss of custody of their healthy children. Henry Friedlander reports that physicians in the killing wards were anxious to fulfill their quotas because the staff of a “productive killing ward” received a financial bonus. “The physicians in the killing wards did everything in their power to prevent parents from removing their children.” (Friedlander, The Origins of Nazi Genocide: From Euthanasia to the Final Solution, 1995)

Whereas a public outcry led to the formal suspension of the T4 adult killing operation in 1941, medical personnel continued to murder children and adolescents in what has been termed “wild euthanasia” during which large numbers of patients were killed (the exact number still is not known) by overdoses of medicine or planned starvation. One example was the Bavarian state hospital at the city of Kaufbeuren, which served as a T4 transfer institution for patients designated for extermination from all over Germany; it later served as a center for “wild euthanasia” (including a children’s killing ward). The staff at Kaufbeuren continued to murder patients even after Germany’s surrender in May 1945. The last child murdered by the head nurse of Kaufbeuren was Richard Jenne. When US soldiers entered Kaufbeuren hospital on July 2nd when Germany’s unconditional surrender became official, they discovered a still functioning extermination institution.  (Lindert J, Stein Y, Guggenheim H, Jaakkola JJK, von Cranach M, Strous RD. How ethics failed – the role of psychiatrists and physicians in Nazi programs from exclusion to extermination, 1933-1945. Public Health Reviews, 2013) 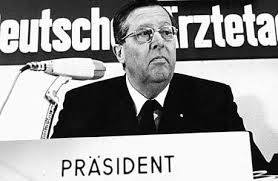 Hans-Joachim Sewering MD, member of the SS, was senior physician at Schönbrunn Sanatoriam in Bavaria, who sent more than 900 children with disabilities to their death at the Eglfing-Haar extermination center. (Read about his extraordinary post-WWII career here and here.)

Following a public outcry, gassing of adults at hospital facilities was suspended in 1941; some of the operation was transferred to death camps. Additionally, an unknown number of disabled German patients were victims of “wild euthanasia”; in hospitals and nursing homes throughout Germany and Austria doctors and nurses killed large numbers of patients either with drugs or by starving them to death. An estimated 250,000300,000 German disabled children and adults were systematically murdered by decree. (Herwig Czech. Abusive Medical Practices on “Euthanasia” Victims, In Human Subjects Research After the Holocaust. 2014) 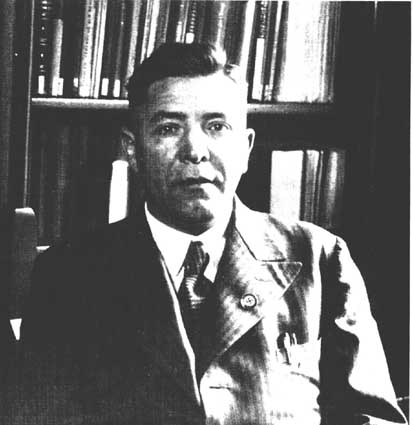 Dr. Carl Schneider, Chairman of psychiatry, Dean of Faculty at Heidelberg University, was a fervent eugenicist. In his capacity as Dean of Heidelberg University he awarded an honorary Doctor of Medicine degree to American eugenicist, Harry Laughlin in 1936. Schneider became a central figure in the children’s murder project and in the research exploitation afforded by the T4 killing program.

In 1942 he wrote, “pathological-anatomical examinations must and can be conducted for numerous studies especially in the framework of the (T4) program.” (Hohendorf and Rotzoll, Medical Research and National socialist Euthanasia: 2014) Schneider was a fervent believer in biological determinism and the need to eliminate all those who exhibited pathology.

The children he selected for killing were subjected to experimentation before they were murdered; and then their brains were removed for further “scientific study.”

Schneider obtained at least 187 brains for pathological-anatomical studies. Documents uncovered criminal experiments conducted on 21 mentally disabled children at Heidelberg’s Clinic for Psychiatry and Neurology which Carl Schneider directed. The experiments that these children were subjected to — and their subsequent murder — was totally suppressed after the war. Schneider hanged himself in prison while awaiting trial in Frankfurt. However, medical doctors at Heidelberg continued to use these murdered children’s brains for their neuropathological examinations until the 1990s. (Hohendorf and Rotzoll, 2014)

In his monumental research in identifying the victims, Dr. Paul Weindling located records of intensive multi-disciplinary research — psychological and anthropological — conducted on each child at at the Heidelberg Research Department of the Psychiatric-Neurological Clinic prior to their murder. The researchers used genealogical charts and ancestral passports to identify each child’s racial / ethnic background. Other departments conducted additional research on the children. Case histories were used to decide which children’s execution would be worth for neuro-anatomical purposes. The purpose of the research was to analyze idiocy as a hereditary condition. 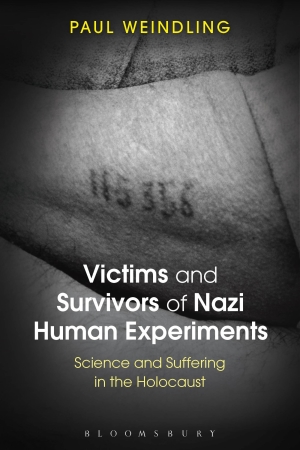 “Research to reconstruct victims’ life histories, shows how case histories reveal a lethal mindset on the part of the clinicians…The voice of the vulnerable patient appears not pathological, but as natural in the circumstances — one girl complaining in Heidelberg, simply ‘ich habe hemweh’ — I am homesick.”

“The network of research grew wider during the war. Drug and vaccine experiments were conducted in Breslau. In 1941, Hans Voegt infected psychiatric patients from the mental hospital in Breslau with hepatitis.

From 1942 experiments occurred in several psychiatric hospitals: Armsdorf, Eichberg, Günzburg, Marburg, and at Eberwalde by summer 1943. These tested IG Farben drugs. Elmar Türk of the Vienna University pediatrics department killed at least three children at the Steinhof hospital in the course of TB experiments. Psychiatrist Kretschmer at Marburg, renowned for his work on physique, conducted shock treatment tests in November 1944. The wide distribution of such infectious disease experiments suggests that using psychiatric patients as human guinea pigs became routine during the war.” (Weindling. Victims and Survivors of Nazi Human Experiments, 2014; Excerpt here)