The first adults to be murdered were 70,000 hospitalized mental patients who were gassed in chambers resembling showers — a prelude to Auschwitz and the Final Solution. The T4 killing centers were the first institutions in history established for industrialized mass murder of human beings. The planners and primary protagonists of the early T4 killing operation: Dr. Karl Brandt (Hitler’s personal physician), Philipp Bouhler (Chief of the Fuehrer’s Chancery (KdF), and Dr. Leonard Conti (Reich Physician Leader and Health Secretary). Fifteen medical planning advisers pledged their support. (Friedlander. Origins of Nazi Genocide…1995)

Although euphemisms were used to camouflage the purpose, everyone involved knew that no one returned from the “special centers”; they merely pretended ignorance. The Reich Committee for the scientific approach to severe illness due to heredity . . . arranged for the killing of handicapped children. The Charitable Transport Company for the Sick transported incapacitated adults by bus or rail to one of six psychiatric hospitals equipped with the gas chambers. The Charitable Foundation for Cure and Institutional Care collected the cost of killings from bereaved relatives. The SS X-ray Battalion identified TB patients in the general population and shot them.

The T4 murder apparatus — the selection process by physicians, transport by rail or bus to killing centers, gas chambers disguised as showers — served as the prototype for the vastly expanded mass-murder apparatus at extermination camps culminating in genocide and the Holocaust. Aktion T4 demonstrated the feasibility of killing large numbers of people — and it demonstrated the willing participation of physicians, nurses and civil servants to become executioners.

Hartheim Castle in Austria was one of six killing centers; it was converted into a Aktion T4 killing center with gas chamber and crematorium. It was in operation for the longest period, and accounted for 30,000 murdered victims; which is more than a quarter of all T4 victims. Hartheim was a major center for the collection and wide distribution of victims’ body parts for German and Austrian researchers and institutions.

During the admission process, doctors selected individuals of “medical interest” for research purposes. These human beings were labeled and photographed prior to being murdered; they were then dissected and organs of interest were removed and preserved for later use by Dr. Hermann Wentzel of the Kaiser Wilhelm neurological clinic (Berlin-Buch). (Czech 2014)

According to documents uncovered by the U.S. Army War Crimes Investigation team, Nazi officials estimated that the killing of these 70,000 handicapped people saved the Reich 885,000,000 Reichsmark (valued today at more than $3 Billion) (Medicine After the Holocaust, a guided tour with lectures by Prof. Paul Weindling and Dr. Herwig Czech, April 2015)

Following a public outcry, gassing of adults at hospital facilities was suspended in 1941; some of the operation was transferred to death camps. Additionally, an unknown number of disabled German patients were victims of “wild euthanasia”; in hospitals and nursing homes throughout Germany and Austria doctors and nurses killed large numbers of patients either with drugs or by starving them to death. An estimated 250,000300,000 German disabled children and adults were systematically murdered by decree. (Herwig Czech. Abusive Medical Practices on “Euthanasia” Victims, 2014)

Dr. Victor Brack, who directed the implementation of both the child and T4 adult medical murder programs, defended medical murder at Nuremberg stating: “we welcomed (the killing program) because it was based on the ethical principle of sympathy and had humane considerations in its favor. . . I admit that there were imperfections in its execution, but that does not change the decency of the original idea. . .” (Origins of Nazi Genocide. . .)

“German anatomists used bodies of victims for teaching and research purposes in all German anatomical departments from 1933 to 1945 and for years thereafter.” (Hildebrandt, 2014)

For example, the Eberhard Karl University in Tübingen, one of Germany’s most famous and oldest universities; internationally recognized in medicine, natural sciences, and the humanities, received 1,077 corpses from executions (Hanausske-Abel, 1996). Sample specimens obtained from the murdered victims were used for teaching purposes and research; some results were published in the 1950s and 1960s (Czech, 2014).

Between 1940 and 1944 Dr. Hallervorden and Dr. Hugo Spatz, director of his Kaiser-Wilhem Institute, acquired a collection of 110,000 brain samples from 2,800 victims of the T-4 murders. Their collection is the foremost neuropathological collection in the world. Hallervorden and Spatz were recognized for discovering a degenerative brain disease (in 1922) named after them.

The inhumanity of the Nazi mass murder operations (“eugenicide”): beginning with infanticide; followed by the murder of German mental patients; culminating in slave labor camps and mass extermination camps; is amplified by the inhumanity of the participating German physicians who violated every moral-ethical precept, demonstrating depraved indifference to human suffering. Atrocities by medical academics escalated from acquisition of dead victims’ bodies to the conduct of anatomical experiments on living but “future dead” people. 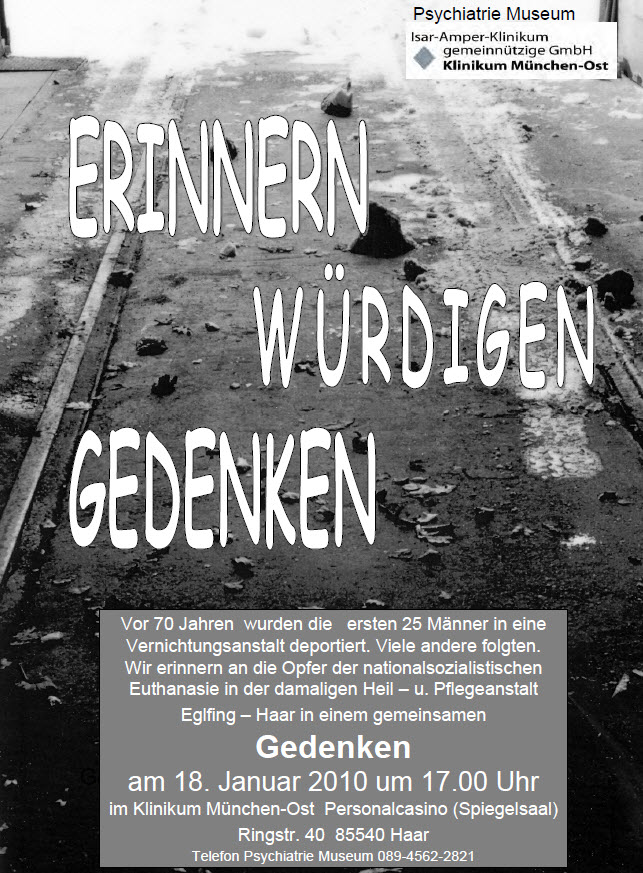 “Psychiatrists, and neurologists, were guilty leaders and participants in the implementation of the Nazi programs, which escalated from humiliation and classification of their victims to the exclusion of the mentally ill and disabled, to devaluation and forced sterilization, to medical murder, then finally to the industrialized mass murder of millions, named the “Final Solution”.  This process was driven by a dangerous mix of failure of medical ethics, racist ideology and individual ambition.” (“How Ethics Failed: The Role of Psychiatrists… Public Health Reviews, 2013)

Project to identify victim of Nazi medical atrocities
Dr. Paul Weindling, Professor of History of Medicine at Oxford Brookes University, heads a project that seeks to identify the victims of all Nazi-era medical experiments: “Life Histories and a Total Population Approach: Victims of Medical Atrocities in Eastern and Southern Europe from the Second World War to 2004.” His effort to identify the victims from the T-4 euthanasia killings has been blocked by the rules governing German archives; the rules dictate that the names may not be released for privacy reasons because they were once psychiatric patients. The rules were clearly designed to protect the criminal medical staff and the institutions. Psychiatric patients who were victims of institutionalized murder, had no privacy.
Previous
Next