A Federal Lawsuit charges Dr. Margaret Hamburg, former Commissioner of the Food and Drug Administration (FDA) with conspiracy, racketeering & colluding to conceal deadly drug dangers – under the federal Racketeer Influenced and Corrupt Organizations law (RICO) law. The amended RICO lawsuit was filed on April 11, 2016 in the U.S. District Court in Washington DC on behalf of eight plaintiffs who claim they have suffered severe harm by ingesting the drug, Levaquin whose deadly risks were concealed to protect financial interests.

The drug is one of the controversial group of antibiotics, including  Levaquin, Cipro, Avelox and other fluoroquinolones. Public Citizen petitioned the FDA in 1996 and again in 2006, to issue Black Box warnings for tendon rupture and tendinitis. Had warnings been issued, the death toll from Levaquin– reputedly more than 5,000 — and the tens of thousands who were debilitated with life-threatening diseases would likely have been averted. (Read risks at RxList)

The suit, filed by Larry Klayman, a former federal prosecutor, charges Dr. Hamburg, her husband, Peter Brown, an executive in the hedge-fund Renaissance Technologies, with collusion, conspiracy and racketeering alongside the pharmaceutical giant, Johnson & Johnson to conceal those deadly risks — to protect their financial stake.

“While Defendant Hamburg was FDA Commissioner, her husband, Defendant Brown’s annual income, not coincidentally, increased from a reported $10 million in 2008 to an estimated $125 million in 2011 and an estimated $90 million in 2012, due in whole or in part to Defendants’ racketeering conspiracy to withhold information about the devastating, life threatening, and deadly effects of Levaquin.”

This lawsuit is unusual; it shines a light on blatant political corruption — the purchase of powerful executive posts.
In 2009, President Barak Obama nominated Dr. Margaret Hamburg for Commissioner of the FDA as a political appointee. The suit alleges that Dr. Hamburg and her husband had made large donations to Hillary Clinton’s campaigns, and to the Clinton Foundation. And that they “gave political contributions and gratuities to President Obama to induce him to nominate her to be appointed as FDA Commissioner.”

“Dr. Margaret A. Hamburg was nominated as a result of huge political and other gratuities to Hillary Clinton and The Clinton Foundation, and at Mrs. Clinton’s recommendation.”

The suit further charges that “During the confirmation process before Congress, Dr. Margaret A. Hamburg, acting in concert with her husband, Peter F. Brown, at all material times the Co-CEO of a hedge fund named Renaissance Technologies, L.L.C., failed to disclose to Congress and other relevant authorities, her and her husband’s clear-cut conflict of interest –specifically, that Renaissance Technologies, L.L.C. held hundreds of millions of dollars of Johnson & Johnson stock, the manufacturer of the deadly drug, Levaquin.” 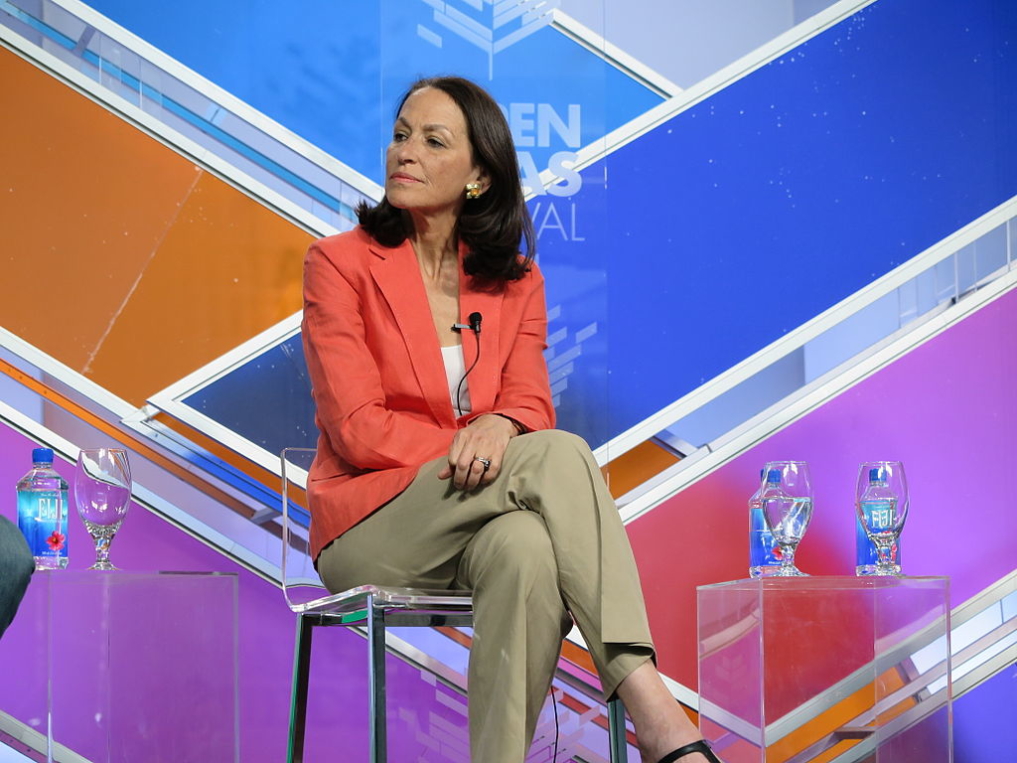 “Once confirmed as FDA commissioner, Dr. Margaret A. Hamburg acted as the instrumentality that all defendants used to perpetrate their conspiracy and racketeering enterprise by having her act illegally and outside the scope of her authority as FDA commissioner to suppress material information to plaintiffs and the public that Levaquin was inherently dangerous and in fact, deadly.”

Hamburg also came under fire when she approved the highly addictive painkiller drug, Zogenix
In December 2012, an FDA advisory panel of experts voted 11 to 2 against approval of the painkiller, Zohydro ER. The panel cited concerns over that drug’s potential for overdose. Indeed, 28 law enforcement agencies and addiction experts had voiced concern that approval of a pure hydrocodone drug will lead to an increase in overdoses and deaths. Zogenix, could be used by people addicted to other opioids, including oxycodone.

Fifteen anti-addiction groups wrote a letter of complaint to the Secretary of Health and Human Services. Despite the safety concerns by the medical and law enforcement community, and despite the expert panel’s overwhelming rejection of the drug, Dr. Hamburg approved it.

The lawsuit provides documentation showing that from 2011 to May 2015, Dr. Hamburg’s husband’s hedge fund, Renaissance Technologies, “not coincidentally, held stock in Alkermes, the manufacturer of Zohydro amounting to tens of millions of dollars. Does anyone not recognize corruption?

The conflict of interest doesn’t end there. Adding even more insult to injury, Alkermes also manufactures a drug to TREAT addiction. So, both Alkermes and Renaissance Tech were given the FDA green light to rake in profits from both the sale of a highly addictive drug, then cashing in on the sale of a treatment for that drug-induced addiction!!

Klayman, the lawyer for several of the victims told KCTV5:

“The alleged criminal corruption we are seeking to remedy in this case is typical of Hillary Clinton and the rest of the sleazy politicians of both political parties that infest Washington, D.C. It helps explain why the political establishment and their lobbyist friends at companies like Johnson & Johnson are being shown the door by the voters during this year’s election. By asking for $120,000,000 over in damages and $750,000,000 in punitive damages, if the victims are successful, they will put a chink in the sides of these alleged criminals and send a loud message that this misconduct will no longer be tolerated.”

Defendant Hamburg, on behalf of all of the Defendants as part of this racketeering conspiracy, gave political contributions and gratuities to Hillary Clinton in 2005, 2006, 2007, and 2008 to induce Mrs. Clinton to recommend and push for Defendant Hamburg to be nominated by President Obama.

In addition, in 2014 Defendant Hamburg spoke at an open town hall meeting on behalf of The Clinton Foundation.

Defendant Hamburg, on behalf of all of the Defendants as part of this racketeering conspiracy, gave political contributions and gratuities to President Obama to induce him to nominate her to be appointed as FDA Commissioner.

Defendant Brown, on behalf of all of the Defendants as part of this racketeering conspiracy, gave political contributions and gratuities to Hillary Clinton in 2000 and 2007 in order for Mrs. Clinton to recommend and push for Defendant Hamburg to be nominated by President Obama as FDA Commissioner.

“While Defendant Hamburg was FDA Commissioner, her husband, Defendant Brown’s annual income, not coincidentally, increased from a reported $10 million in 2008 to an estimated $125 million in 2011 and an estimated $90 million in 2012, due in whole or in part to Defendants’ racketeering conspiracy to withhold information about the devastating, life threatening, and deadly effects of Levaquin.”

As part of Defendant Hamburg’s pattern and practice of acting illegally outside of the scope of her authority as FDA Commissioner in furtherance of the racketeering enterprise and conspiracy, she counseled the FDA to also approved another highly dangerous pharmaceutical drug that Renaissance Technologies owns stock in, Zohydro, despite the fact that on December 7, 2012, an FDA Advisory Committee voted 11 to 2 against its approval.

In or around March 2013, Defendant Hamburg personally testified to members of Congress that she supported Zohydro’s approval. On November 5, 2015, after Defendant Hamburg had resigned, an FDA employee, Debra Boxwell, finally exposed to Plaintiffs, and the public at large, that Defendant Hamburg and the FDA had been aware that Levaquin may result in multi-system disability since 2013, but that it did nothing to add this information to the Levaquin label and instead conspired with the other Defendants to fraudulently withhold it.”

In 2014, Forbes listed Dr. Hamburg as the  51st most powerful woman in the world. Her husband is identified in Wikipedia as an “artificial intelligence researcher” rather than as a hedge-fund executive.

Former Food and Drug Administration (FDA) Commissioner Margaret A. Hamburg, her hedge-fund executive husband, and Fortune 500 giant Johnson & Johnson colluded to enrich themselves by failing to warn the public about a “deadly” antibiotic, a federal racketeering lawsuit claims.

“Once confirmed as FDA commissioner, Dr. Margaret A. Hamburg acted as the instrumentality that all defendants used to perpetrate their

Conspiracy and racketeering enterprise by having her act illegally and outside the scope of her authority as FDA commissioner to suppress material information to plaintiffs and the public that Levaquin was inherently dangerous and in fact, deadly,” the complaint alleges.

The suit was filed in the U.S. District Court for the District of Columbia Jan. 19, 2016, on behalf of five individuals who claim they suffered severe physical harm as a result of taking the antibiotic.

“Had this information been disclosed to plaintiffs and the public at large, her and her husband’s financial gain and net worth would have plummeted, since Dr. Margaret A. Hamburg’s husband, Peter F. Brown, reaped and continues to reap huge financial gain as a result of Renaissance Technologies, L.L.C.’s holdings of Johnson & Johnson stock,” according to the complaint.

Alexandra Walsh, an attorney for Hamburg, said “Mr. Klayman’s allegations against Dr. Hamburg are patently false. There is no factual or legal basis for the lawsuit he has filed, and we are confident the court will dismiss his claims in their entirety.” Walsh was referring to attorney Larry Klayman, who represents the plaintiffs in the suit.

The suit further claims that Hamburg ignored pleas from medical experts, patients and U.S. senators to add additional warning labels so she could profit personally, according to the racketeering complaint filed in U.S. District Court for the District of Columbia.

President Obama appointed Hamburg to run the FDA from May 2009 to March 2015, while her husband, Peter F. Brown, was a co-CEO at New York hedge fund giant Renaissance Technologies.

The FDA’s Adverse Event Reporting System documented “500 reported deaths associated with consuming Levaquin” from 2009 to 2015, although the FDA assumes only 10 percent of such events are reported and there could be as many as 5,000 deaths, the complaint alleges.

The FDA first approved Levaquin for some uses in 1996, but the FDA Adverse Reporting System since at least 2009 documented the drug’s association with serious nerve and psychiatric damage, the complaint claims.

Dr. Charles Bennett, oncologist and researcher at the Southern Network on Adverse Reactions at the University of South Carolina, filed two citizens petitions to Hamburg’s FDA in 2014, urging further labeling to warn of possible cell damage and neurodegenerative diseases like Parkinson’s, Alzheimer’s and Huntington’s associated with Levaquin.

Hamburg also received “hundreds” of emails from people who had severe health problems from taking Levaquin, but did nothing, the complaint claims.

The FDA added some additional warning labels for Levaquin in August 2013 to warn of risk for “possibly permanent nerve damage from antibacterial fluoroquinolone,” but suppressed the drug’s full dangers, the complaint alleges.

It wasn’t until November 2015, after Hamburg left, that an FDA advisory committee recommended clearer, more comprehensive warning labels for Levaquin and related drugs, the complaint alleges.

An FDA advisory board voted 11-2 against approving Zohydro in December 2012 over fears the drug didn’t have enough anti-abuse protections, and 28 state attorneys general urged the FDA to undo its approval of the drug in December 2013.

Sen. Joe Manchin, a Democrat from West Virginia, introduced a bill in 2014 to ban the opioid. But Hamburg defended the drug’s approval in a March 2014 congressional hearing, saying that, “if appropriately used, it serves an important and unique niche with respect to pain medication and it meets the standards for safety and efficacy.”

The Office of Government Ethics (OGE) directed Hamburg and her husband to divest all personal holdings in Renaissance, except those in Renaissance’s Medallion Fund because OGE considered its computerized quantitative model similar to a blind trust, according to the Wall Street Journal. Hamburg’s financial disclosures show she kept between $250,000 and $500,000 in Medallion Fund assets, and Brown kept more than $1 million.

But the complaint alleges Hamburg failed to disclose that her husband “at all material times, still held shares in — and benefits financially from — all of the stocks of Renaissance, via Renaissance Technologies profit-sharing …”

Lawyers for Brown, Mercer, Simmons, Renaissance Technologies and Johnson & Johnson did not respond to requests from TheDCNF for comment.

Do You Think Margaret Hamburg Is One Of Obama’s Worst Appointment?

Completing this poll entitles you to Daily Caller news updates free of charge. You may opt out at anytime. You also agree to our Privacy Policy and Terms of Use.