May 2016: The State of Psychiatry — Child Psychiatrists at APA Meeting

Child psychiatrists at the annual meeting of the American Psychiatric Association in Atlanta, in May 2016, called for “big solutions to improving child mental health care,” recommending an aggressive drug algorithm approach for children. (Psychiatric News, June 16, 2016) This is a not very subtle effort to resuscitate the notorious drug marketing scheme initiated and funded by Johnson & Johnson in 1995 which is known as TMAP (Texas Medication Algorithm Project and its offshoot for children, TCMAP) which was adopted by state mental health departments. All the major manufacturers of psychotropic drugs jumped on the TMAP gravy train which spear headed patent protected psychotropic drugs into blockbuster sellers.

Read the still very relevant Report by Allen Jones who first blew the whistle in 2004, on TMAP and the academic psychiatrists who comprised the TMAP consensus panel who subverted science and betrayed their professional responsibility toward patients seeking help. Among their disastrous treatment recommendations was to encourage mental health professionals to use of J & J’s antipsychotic drug Risperdal — even for children.

(Mr. Jones was later joined by the Texas Attorney General in a landmark lawsuit which was settled in 2012 when J & J for the first time agreed to resolve a state’s claims over defrauding Medicaid and downplaying the risks of Risperdal by paying $158 million.)

“algorithmic medicine.”
“The idea was that the tepid response was because the drugs weren’t given right. They advocated pushing the dose, making sure patients stay on the drugs long enough, following an algorithm to sequence different antidepressants or augment in treatment failures, and treating to remission. We mostly know of TMAP because it was the PHARMA-funded scheme to require using in-patent drugs in public clinics that almost bankrupted Texas Medicaid.”

(As noted by a man of many professional accomplishments — mathematician, MD who specialized in internal medicine, then switched to psychiatry. Mickey Nardo blogs under the pseudo name, 1 Boring Old Man)

GlaxoSmithKline Study 329 is a notorious drug experiment in which Paxil (paroxetine) and imipramine were compared to placebo in 275 adolescent children. The authors penned to the ghostwritten report were / are the leading academic child psychiatrists in the U.S. many of who also penned their name to the TCMAP consensus panel report in 1999, a drug marketing promo masquerading as authoritative medical opinion. (NCBI PubMed)

The report (Study 329) claimed that Paxil (Paroxetine) “demonstrated significantly greater improvement compared to placebo” and concluded, “Paroxetine is generally well tolerated and effective for major depression in adolescents.” The report was rejected by the Journal of the American Medical Association; whereupon it was submitted to the Journal of the American Academy of Child and Adolescent Psychiatry. Despite the fact that its peer reviewers noted that the results did not “clearly demonstrate efficacy for paroxetine,” JAACAP published the report in 2001. (NCBI, PubMed where all authors are listed.)

The study’s misrepresentation of the data and falsification of the findings has been a bone of contention for 15 years during which independent scientists sought to gain access to the data. (Healthy Skepticism) GSK has been criticized and fined numerous times; including by NY State Attorney General; and once fined for $3 billion for exaggerating Paxil’s safety and marketing its improper use in adolescents.

Another ghostwritten study came to public notice when Forest Pharmaceuticals pleaded guilty to criminal charges under the False Claims Act; acknowledged having commissioned a ghostwritten favorable report penned by academic psychiatrists advocating the use of Celexa in adolescents. The lead author named in the published report was Dr.Karen Dineen Wagner. The report was published in The Journal of the American Psychiatric Association (2004). In 2014, Forest agreed to pay more than $300 million to settle the case.

Both of these ghostwritten reports have recently been deconstructed under the RIAT (restoring invisible and abandoned trials) initiative of 2013. The data has been re-analyzed / restored by highly reputable independent scientists who reveal how the studies had been manipulated; evidence of risks was concealed, and the reported findings misrepresented the data as positive — these studies have thus been completely discredited.

Results: “The efficacy of paroxetine and imipramine was not statistically or clinically significantly different from placebo for any prespecified primary or secondary efficacy outcome…There were clinically significant increases in harms, including suicidal ideation and behaviour and other serious adverse events in the paroxetine group and cardiovascular problems in the imipramine group.”

Conclusions: “Access to primary data from trials has important implications for both clinical practice and research, including that published conclusions about efficacy and safety should not be read as authoritative. The reanalysis of Study 329 illustrates the necessity of making primary trial data and protocols available to increase the rigour of the evidence base.

Plaintiffs’ attorneys, in the case of Celexa and Lexapro Marketing and Sales Practices Litigation — US Attorney and the Justice Department — challenged the confidentiality designation of Forest’s CIT-MD-18 study documents, and of the expert witness declarations which were submitted as plaintiffs’ evidence. As a result, a sub-set of the confidential documents was declassified and posted on the Drug Industry Document Archive at the University of California. Those documents provided the data and served as the basis for the reconstruction of study CIT-MD-18.

RESULTS: The published article contained efficacy and safety data inconsistent with the protocol criteria. Procedural deviations went unreported imparting statistical significance to the primary outcome, and an implausible effect size was claimed; positive post hoc measures were introduced and negative secondary outcomes were not reported; and adverse events were misleadingly analysed. Manuscript drafts were prepared by company employees and outside ghostwriters with academic researchers solicited as ‘authors’.

CONCLUSION: Deconstruction of court documents revealed that protocol-specified outcome measures showed no statistically significant difference between citalopram and placebo. However, the published article concluded that citalopram was safe and significantly more efficacious than placebo for children and adolescents, with possible adverse effects on patient safety.

The total demolition of Study 329 and study CIT-MD-18 should have resulted in their retraction by the publisher;  it did not.
It should preclude the academics whose names are penned as authors from qualifying as credible authorities. It did not because nothing of the sort ever happens in psychiatry where scientific integrity has no role and psychiatrists caught in being complicit in scientific fraud are rewarded by both industry and psychiatry’s professional associations.

Dr. Karen Dineen Wagner, a named author on Study 329, and CIT-MD-18, was also a member of the TCMAP consensus panel and was instrumental in promoting the TMAP scheme. She was in fact a named author on multiple ghostwritten favorable clinical trial reports touting the safety and efficacy of Paxil, Celexa, Prozac, Zoloft and other drugs that were tested in children in order to promote their wide use in children.

Yet, she affected total ignorance during legal depositions, about the nature, the design and the method of calculating trial results, or even remembering having read the manuscripts of clinical trials and reports to which her name was penned.

In 2015-2016: Dr. Karen Wagner was elected President of the American Academy of Child & Adolescent Psychiatry. At the June 2016 meeting of the American Psychiatric Association, she affected the demeanor and status of authority, as she recommended an aggressive drug algorithm approach for children. She summarily discounted parental concerns about drug ill effects; and even suggested ways to circumvent FDA’s limited approval of antidepressants for children. She concluded her presentation: “We need to become much more systematic in treating depression.” (Psychiatric News)

As “1 Boring Old Man” cogently observed: “It is literally a blast from the past, almost twenty years ago. The fact that it has been reincarnated at the 2016 APA meeting in spite of all the intervening evidence and dialog to the contrary is remarkable. I guess she thought we would forget…”

”Dr. Wagner has essentially made her career advocating the use of psychophatmacologic agents in the treatment of children – having covered the gamut of conditions, drugs, and worked with many of the front-running drug companies who make and profit from these drugs. Surely the broad membership of the AACAP knows that, and knows about the dark side of her work – ghost-writing, financial COI, withheld negative studies, TMAP, training sessions for PHARMA. At a time when such things are moving closer and closer to the front burner, why would the AACAP membership choose her as President?  Is this a sign that her position represents the consensus of the members?” (1 Boring Old Man) 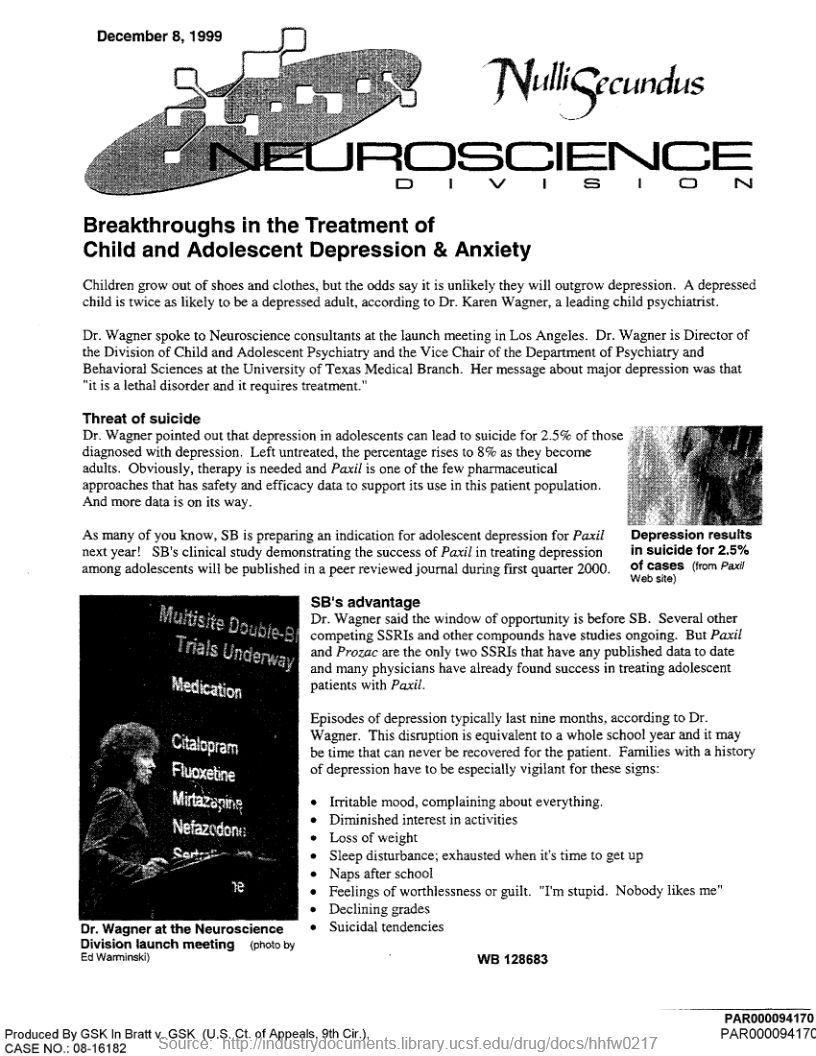