July 8, 2016: Swiss Public Television SRF uncovered evidence that “human rights were breached” in non-consensual drug tests conducted on patients at a psychiatric clinic in Herisau, Switzerland in the 1950s. The experimental drug Tofanil was tested in pre-marketing trials on behalf of its manufacturer Geigy. Medical documents reveal that several patients collapsed and one died. 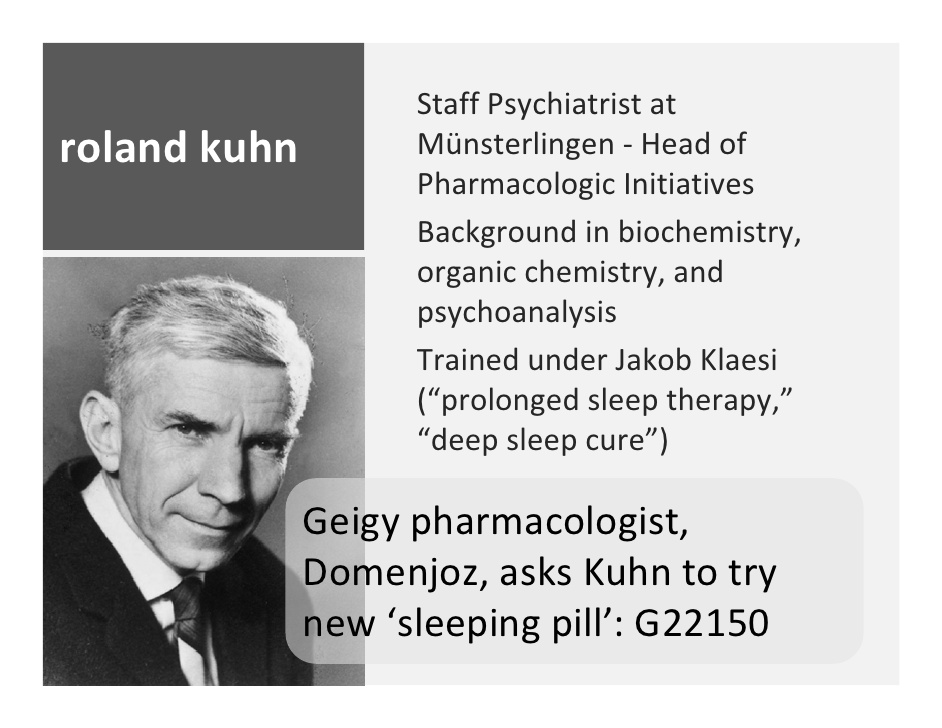 Background: In the 1950s psychiatry bonded with the pharmaceutical industry, setting off a chemical  usurpation of mental patients’ treatment. First the introduction of the neuroleptic chlorpromazine (Thorazine), followed by the tricyclic antidepressant Tofanil / Imipramine, a dibenzoazepine analogue of Thorazine. The first trial of imipramine took place in 1955 and the first report of its antidepressant effects was published by Swiss psychiatrist Roland Kuhn in 1957. Much of the testing of Geigy’s imipramine, then known as Tofranil, took place at the Münsterlingen Hospital near Konstanz. (Geigy later became Ciba-Geigy which merged with Sandoz Labs in 1996 to form Novartis).

Originally, the drug was sought as a sleeping pill; it was not targeted for the treatment of depression due to the paradoxical observation that this sedative induced mania. This led to extensive testing at high doses in hospitalized patients without their consent. Some reports later described the drug’s effect as “quite disastrous” in some patients.

Margrit Kessler, president of the Swiss Patients’ Association, explained that in the 1950s tests with high doses of medication were common and that deaths were accepted. “It’s a medication that you nowadays use against depression, but in a much lower dosage than what was used in these tests,” she explained.

After it was revealed (about three years ago) that various drug tests had taken place at the Psychiatric Clinic in Münsterlingen in the 1950s and 1960s — without patients’ permission — the Thurgau cantonal government commissioned a research investigation in 2014 to look into the tests at the clinic between 1946-1972. The investigation report is due in 2018.

Dr. Kuhn, like the other pioneering researchers of his day, was given access to new drug entities by their developers. The method he used to discover their clinical effects was open-minded, unfettered exploratory, comprehensive, clinical observation. He eschewed rating scales, relying instead on close and frequent (sometimes daily) observation of his patients and he paid close attention to the comments of nursing staff. His approach is the antithesis of contemporary company-controlled trials whose patient assessment is narrowly defined by clinically meaningless rating scale check lists.

However, like the psychiatrists before and after him, Dr. Kuhn disregarded the human right of mental patients to have the choice of giving consent or refusing to be subjected to test experimental drugs which always involve risks.

A recent paper by Walter Brown, MD and Maria Rosdolsky, MD, The Clinical Discovery of Imipramine, in The American Journal of Psychiatry (2015) presents excerpts in the first English translation of Kuhn’s published report. The authors note that:

“the historical significance [of] Kuhn’s achievement stands in such contrast to the present impasse in drug development, the authors thought that it might be informative to read about his discovery in his own words.”  The authors note that their intent is “encouraging reevaluation of contemporary approaches to drug discovery.”