UK Mirror, March 2016: “Woman Died After NHS Electric Shock Therapy Was Given Without Consent or Second Opinion”
Senior Coroner Derek Winter, expressed concern to the UK Health Secretary about the circumstances that resulted in the death of a mentally ill woman after she was subjected to Electroshock without her consent. UK law requires (since 1983) a second medical opinion before this extreme treatment may be applied; but no doctor provided a second opinion. The Daily Mirror reports that following three ECT treatments, “Elsie Tindle, 71, suffered a permanent epileptic seizure causing irreparable brain damage.”

The pathologist Dr. Nigel Cooper, who performed the post-mortem on Miss Tindle, concluded “the formal cause of death as anoxic-ischemic brain damage, due to status epilepticus, due to electroconvulsive therapy.” Despite abundant documented evidence of brain damage following ECT, psychiatry continues to subject – mostly unwilling women – to this brain damaging intervention since the 1930s.

Dr. Eugene van Rheede van Oudtshoorn, the psychiatrist who ordered ECT for Miss Tindle claimed: “It’s a very, very rare complication. I couldn’t find other cases where someone had gone into a seizure or status epileptica a day later. There are anecdotal reports of people developing epilepsy after ECT, perhaps one in 80,000.”

ECT has been a contentious subject of debate for more than 70 years
Each year, an estimated 100,000 Americans – two thirds of them women—undergo ECT for major depression and other psychiatric diagnoses. The ECT literature is mostly corrupted by financial conflicts of interest. Inasmuch as neither the safety of ECT machines nor patient follow-up studies have been performed, reports that claim that ECT is “safe and effective” have not been backed up by any scientific evidence; they are written by self-serving, biased authors who promote ECT in which they have a financial stake.

The results of the first large, prospective study conducted at Columbia University by ECT’s most prominent federally funded researcher, Dr. Harold Sackeim, in 2007 confirmed the harm produced by ECT:

“This study provides the first evidence in a large, prospective sample that the adverse cognitive effects can persist for an extended period, and that they characterize routine treatment with ECT in community settings.” (Cognitive Effects of Electroconvulsive Therapy in Community Setting, Neuropsychopharmacology, 2007, 32:244-254)

The study confirmed that ECT-induced long-term memory loss and other cognitive problems–especially for women, who are the majority of persons who undergo ECT. The also study confirmed that electroshock methods, including electrode placement and electric voltage, varied widely among practitioners – no safe standards have been established.  ECT practitioners operate in an unregulated, Devil-May-Care culture; psychiatry has the dubious distinction of disregarding the harm its “treatments” cause patients.  A, ECT literature review by two clinical psychologists, John Read (New Zealand) and Richard Bentall (UK) in the journal Epidemiologia e Psichiatria Sociale (2007). They concluded:

They concluded that “the cost-benefit analysis for ECT is so poor that its use cannot be scientifically justified… The continued use of ECT therefore represents a failure to introduce the ideals of evidence-based medicine into psychiatry.” (Read a review by Duff Wilson, The New York Times, 2011 here)

A comprehensive examination of ECT was written by Linda Andre, a patient who had been harmed by ECT: Doctors of Deception: What They Don’t Want You to Know about Shock Treatment (Rutgers University Press, 2009)

In her chapter, “The Triumph of Public Relations over Science In its public relations campaign,” she describes how “the APA [American Psychiatric Association] has successfully reshaped perception of the nature and risks of shock for a whole generation of doctors, patients, and the public.” 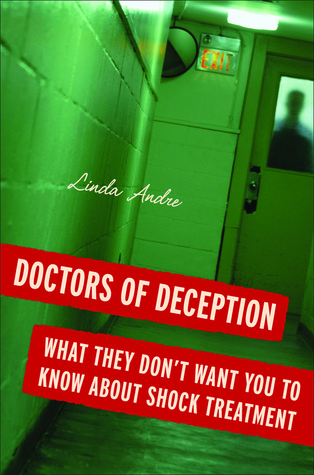 “In doing so, it has subtly redeﬁned the very meaning of words like “informed consent” and “competency” to its advantage. The result is that the ECT industry has found a foolproof way to get around the laws protecting patients’ rights to full disclosure and to refuse treatment.

As well, it has been able to insulate itself from potential liability for damages. Patients today often have, in reality, fewer rights and less recourse than they had before the PR campaign. How did this happen? The PR Line for the Twenty-First Century Beginning in the 1990s, the industry began to formulate a novel public relations solution to its enduring problem of shock patients who continue to allege brain damage. It now claims that mental illness causes brain damage. Since everyone who has had shock was labeled mentally ill at some point, this theory serves as a convenient smokescreen for reconceptualizing brain damage as the result of intrinsic disease rather than an outcome of treatment. (In one fell swoop, the estimated fourteen million Americans who are labeled depressed have been deﬁned as brain damaged—a story no one in the media has picked up on yet.)

By the rules of the doubting game, the onus is now placed on others to prove that depression does not cause brain damage, not on the industry to prove that it does. Meanwhile, a brand new answer to the embarrassing question of how ECT exerts its therapeutic effects is offered. According to Harold Sackeim and others, not only does shock not cause brain damage, it causes patients to grow new brain cells. I ﬁrst heard Sackeim talk about this at the beginning of the 1990s. This was in the context of an interview that was to have been a discussion of ECT research, but instead, he wanted to talk about his new explanation for why survivors report brain damage and memory loss. They were mistaking the effects of psychiatric conditions for the effects of ECT. He tried to tell me that my massive loss of intelligence post-ECT was caused by psychosis. But I was never psychotic.

He had nothing to hang this theory on. Nevertheless, he continued to elaborate on his theory that mental illnesses are literally toxic conditions that damage the brain. Depression, he said, is a progressive cerebrovascular disease, and any changes in the brain are due to this ongoing degenerative disease process, not ECT. That was why, according to Sackeim, there was no need for a brain scan study looking at people before and after shock. It was in the best interest of humanity, he concluded , that scientists were investigating this new theory of depression, rather than that tired and boring old question of whether ECT causes brain damage.

During a 2001 conversation, he repeated the claim he ﬁrst made to me ten years earlier. I queried him on all angles, so that there was no chance of misunderstanding him. Depression itself, period, causes permanent brain damage, he said, even when it’s successfully treated, even if the person recovers and never again has any symptoms. In my case, he said, a single episode of depression lasting a few months, sixteen years earlier, must have damaged my brain severely enough to cause permanent cognitive problems. This was true even though I hadn’t had any of these cognitive problems while I was depressed, only after the ECT when I was not.

In support of his theory, Sackeim—who speaks in literature citations whenever possible—threw out some names, dates, and journal references. I read the articles, but they didn’t say what he claimed they did. Intrigued, I got in touch with the scientists themselves. All do brain research. None of them do ECT. Some work only with animals, not humans. None were aware of Sackeim’s attempts to hitch his theories to their research. All were willing to discuss their work with me in detail. Scientists Respond to Sackeim All of the researchers told me, in no uncertain terms, that Sackeim’s “depression causes brain damage” theory was not supported by the science. The scientist Sackeim mentioned most enthusiastically as supporting his theory was psychiatrist Yvette Sheline of Washington University in…”  (Read comprehensive excerpts from Andre’s book at Project Muse here)