Medical Research — Peeling the Onion from the Inside Out

A book review by AHRP board member, John J Noble Jr, Emeritus Professor, was recently published in the Indian Journal of Medical Ethics. The book, Reducing Adverse Events in Older Patients Taking Newly Released Drugs by Margaret T. Whitstock, an Australian research professional, is an indictment of the the U.S. Food and Drug Administration’ flawed drug evaluation and approval process.

FDA’s approval policy is based on the assumption– not evidence — of their effectiveness. Even worse, FDA undermines the safety of consumers who will be prescribed the drugs it approves by failing to properly assess the risks of those drugs in those populations. FDA’s policy comports with the drug industry’s financial interest. Maximizing profits is the guiding principle controlling the clinical trial design; the selection of populations in which drugs are tested; how risks go undetected; and how the results are evaluated and reported in the journal reports. The risks, as

“drug manufacturers would prefer that risks associated with a newly approved medication are established by patients’ experiences of adverse events, as this occurs at no cost to the manufacturer,”

Despite the human catastrophes that follow as a consequence of FDA’s flawed approval process, the agency has not changed its method or policy in the approval of new drugs. Therefore, catastrophes are likely to recur. 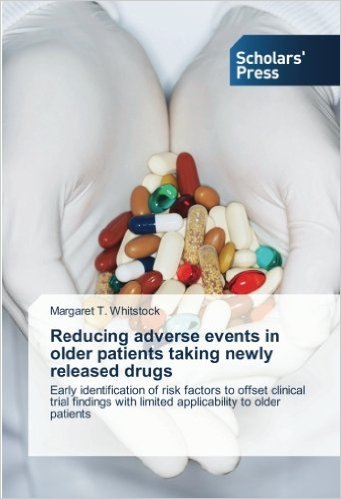 For those looking for a primer on how the Vioxx® debacle came about, Margaret T Whitstock’s new book, Reducing adverse events in older patients taking newly released drugs, is a must read (1). Reading the plain-talk narrative is like peeling away an onion’s layers but from the inside out. Like a prosecuting attorney, the author meticulously presents the heap of forensic evidence showing how in the course of time the coordinated actions of industry, government, and the biomedical research community have degraded the basic rules of empirical science to produce a foreseeable and preventable tragedy.

Its chilling conclusion is that there are more such tragedies awaiting us unless patients and their physicians take steps to confront the research community and its political leadership about the privileged use of flawed and manipulated randomised controlled trials (RCT) to guide evidence-based medicine (EBM). The forensic evidence demonstrates how EBM guidelines depending on RCTs as now conducted lead physicians to make treatment decisions that increase the morbidity and mortality of older patients who have been systematically excluded from RCT participation because of their comorbidities and use of multiple medications.

Most damning is Dr Whitstock’s indictment of the current US Food and Drug Administration* (FDA) approach and policy for assessing the generalisability of the RCTs on which it depended for approving the effectiveness and safety of new drugs. That policy in effect makes the older patient population guinea-pigs in the uncontrolled experiment, sometimes referred to as “pharmacovigilance,” that depends on the voluntary reporting by physicians of perceived adverse effects in patients for whom they have prescribed FDA vetted and approved drugs on the assumption of their effectiveness and safety. As she points out, “drug manufacturers would prefer that risks associated with a newly approved medication are established by patients’ experiences of adverse events, as this occurs at no cost to the manufacturer” (1: p 172).

Dr Whitstock’s book of six chapters and 197 pages, including figures, tables and three appendices, starts out with the essentials about older patients as consumers of new drugs, as participants in RCTs of new drugs, and safety concerns when prescribed new drugs that have been approved on the basis of the RCTs from which older patients with comorbidities and poly-drug use have been systematically excluded for the sake of internal validity.

Chapter 2 covers the genesis and development of the randomised controlled trial and its epistemological foundation in epidemiology with its focused search for a pathogenic cause-and-effect relationship—an agent and a disease. The root source of confusion in the interpretation of RCTs is the “frequentist” approach to statistical inference that emphasizes ritualised p<0.05 stochastic significance rather than the quantitative judgement of the significance of single-agent interventions from a clinical perspective. The use of surrogate end-points in the assessment of statistical significance adds to the confusion.

Chapter 3 addresses the privileging of the RCT as the “gold standard” of scientific medical evidence and underpinning of EBM. Adopting the average effect of an RCT on often surrogate end-points constrains choice of which interventions can be investigated for clinical decision-making. The tradeoff often involves design, analytic, and cost-efficacy at the RCT level at the expense of gaining knowledge about how well an intervention works in the clinical context. There is an inherent conflict in values insofar as EBM levels of evidence tables put clinician opinion at the lowest level of scientific rigour and confidence. Dr Whitstock points out that the privileging of the RCT as providing objective and neutral scientific evidence is specious every step of the way because the “selection and definition of the problem, the variables to be evaluated, the participating subjects, the procedures and measuring techniques, the nomination of what will be considered as an outcome, the statistical analyses to be performed, and the interpretation of those analyses . . . are made from a position of pre-specified interests” (1: p 71). In effect, the EBM stance seemingly sacrifices the very interests of the clinicians and their patients it purports to serve.

Chapter 4 documents the external pressures from pharmaceutical regulation that reinforce and enhance the privileging of RCT evidence—especially those resulting from the political process and economic and regulatory domination by the USA. In my view, Dr Whitstock’s concise history of the “political capture” of the FDA by the pharmaceutical industry is among the best narratives about the FDA as an “inherently political actor.” FDA regulatory decisions extend well beyond US borders with significant impacts on the lives and well-being of the citizens of the world. The Prescription Drug User Fee Act (PDUFA) of 1992 completed the political capture of the FDA by industry with attendant erosion of safety standards and corruption of internal decision-making, as reported by FDA whistleblowers and an external survey of FDA scientists by the Union of Concerned Scientists (UCS). The truth of the German proverb, “Whose bread I eat, his song I sing!” rings no truer than from the mouths of one in five FDA scientists reporting that they “have been asked explicitly by FDA decisionmakers to provide incomplete, inaccurate or misleading information to the public, regulated industry, media, or elected/senior government officials.” In addition, more than a quarter (26%) feel that FDA decision-makers implicitly expect them to “provide incomplete, inaccurate, or misleading information” (2: p 2).

Chapter 5, titled “Where the truth lies: managing the RCT to mislead,” provides a carefully-researched airing of what is known about the Merck clinical trials of the COX-2 selective NSAID rofecoxib (Vioxx®) to demonstrate how to manipulate an RCT to produce desired results. Had I written the chapter, I would have titled it, “A primer for knaves to mislead fools.” Why? It took sophistication to figure out how to create composite end-points in the RCTs of Vioxx® to mask endpoints that might have caused concern. The discrepancy between what was known by the FDA and what was published about the VIGOR RCT in the New England Journal of Medicine (NEJM) is troublesome and raises doubt about the knowledge and sophistication of high-impact medical journal peer reviewers. Dr Whitstock’s conclusion is that the efficacy and safety of a new drug depends not on the presence or absence of an RCT study design but the “competing pressures of internal and external validity” that played out in the Vioxx® RCTs. Clearly, these RCTs could say nothing that had internal or external validity about excluded older patients with comorbidities and poly-drug use.

Chapter 6 reports the results of a Western Australian use of clinical trial data linked to administrative health data to prospectively identify patient groups at potential risk for an adverse drug reaction. The benefit–cost ratio of preventing avoidable adverse drug reactions would always be positive from a societal perspective. The direct costs incurred by government and private insurers to pay for treatment of new short- and long-term morbidities arising from drug reactions are large. The indirect costs of the burden of suffering and foregone opportunities that these new morbidities impose on individual patients and families are still larger. Dr Whitstock envisions improvements in accessing information about clinical trials, such as implementation of Section 801 of the US Food and Drug Administration Amendments Act of 2007 that mandates registration via ClinicalTrials.gov of all RCTs submitted in support of FDA marketing approval, as empowering development of early warning systems like the one developed for Western Australia.

The Western Australian endeavour demonstrates the feasibility of designing and implementing early warning systems for patients who have been excluded from RCTs because of comorbidities and poly-drug use. In my view, it will be a steep uphill climb to overcome resistance from the pharmaceutical industry and government and private sector sponsors of research as well as biomedical research opinion leaders and the researchers themselves. Paying attention to the requirements of external validity comes at some cost (3). There will be need to anticipate and include rather than exclude clinically relevant populations within larger sample size RCTs. Alternatively, there will be need to design and implement separate RCTs to directly establish the efficacy and safety of new drugs on these excluded populations before granting regulatory approval. Hopefully, the EBM leadership will strike a balance between pursuing improvements in the design, implementation, and reporting of internally valid RCTs and promoting their external validity. The Oxford Centre for Evidence-Based Medicine is uniquely qualified and capable of taking on the challenge (4).