Who are the anti-vaxxers, really?

If I asked you whether you were for or against pharmaceutical drugs, you would think my question absurd.  Obviously, each drug is different and should be judged on its own merits; furthermore, the usefulness of a drug depends on the specific needs of the person to whom it is given.  Yet we have become accustomed to thinking about the vaccine issue in terms of being pro or con the entire class of vaccines.

Most parents who do not fully vaccinate their children are not “against” vaccination. The media have incorrectly framed the debate this way, for a reason.  The for–or–against meme is very powerful propaganda, designed to suggest that this issue is black and white, which it most assuredly is not.  It is further designed to create a picture in people’s minds that those “against” vaccine mandates are anti-science, uneducated ‘deplorables’ (and who wants to be in that camp?) while those “for” vaccinations and mandates are the educated, pro-science, savvy people.

But guess what? Families who vaccinate less turn out to be wealthier and more highly educated than families that receive all the recommended vaccinations.  So, if they aren’t the ‘deplorables,’ are they entitled elites trying to get a ‘free ride’ off the backs of everyone who fully vaccinates?

What might be the true reason they decline vaccinations?

In the US, only 1.1% of children receive no vaccinations at all.

According to CDC about 25% of children receive some, but not all recommended vaccinations. Their parents are choosy. They may have recognized that the birth dose of Hepatitis B is an unnecessary vaccine for 99% of babies. They may have learned that the age 12 dose of Tdap has little value. It doesn’t prevent much pertussis, and kids are already immune to tetanus and diphtheria after 5 earlier vaccine doses.  They may have cottoned on to the fact that their child doesn’t need either Meningitis A,C,W,Y or Men B vaccines when there is less than a one in a million chance of getting meningococcal disease. (Rates of meningitis had dropped before current vaccines came into use.)  They may know that while the vaccines certainly generate an antibody response, real world efficacy of these 2 vaccines has yet to be determined.

For these diseases, herd immunity does not exist. [Hep B requires bloodborne or sexual transmission. Pertussis immunity wears off so quickly that the vast majority of pertussis cases are vaccinated, but non-immune. Vaccination may increase the duration of pertussis shedding. Meningococcus is carried in the nose/throat of from 1-25% of the population, with or without vaccination.]  Therefore, for these specific conditions, the unvaccinated get no free ride from the vaccinated, nor do the unvaccinated pose more than a minuscule increased risk to others.

Parents have a legal right to opt out of vaccines using religious or philosophical exemptions in 47 US states.  I wasn’t choosy when my kids were small, but today I certainly would be, if only because the benefits and risks are different for each vaccine.

Why does this author claim authority?

I strongly support vaccinations, and everyone’s right to vaccinate with any licensed vaccine they choose.  But I know a lot about how vaccines are made, and the serious adverse effects they can cause.  I am an expert on the anthrax vaccine, and have provided expert testimony on this vaccine to several congressional committees, the National Academy of Sciences, the Canadian military courts (which led to ending its use in Canada) and a British tribunal.  And I, through my patients’ bitter experiences, learned it is critical to retain the right to choose your vaccines.

The fact is, every vaccine is made very differently from every other. Just like drugs, no vaccine is “100% safe,” and some are not very effective. You will lower your family’s risk of an adverse effect by choosing only those vaccines that provide high value:  needed benefit and relatively low risk.

This is of course what doctors are expected to do when they prescribe drugs.

When vaccines are mandated, there is no incentive for their manufacturers to improve them.  Sometimes, vaccine effectiveness becomes less over time.  The whole-cell pertussis vaccine was replaced by the current acellular pertussis vaccine in 1997 both because its effectiveness had lessened, and because it caused a high rate of adverse events. Had consumers not been refusing it, there might have been no switch to an acellular vaccine.  Now, we need a more effective pertussis vaccine, but with a guaranteed market for existing vaccines, industry has been slow to respond.

Vaccines are both ‘biologics’ and drugs, according to the Food, Drug and Cosmetic Act. And according to the FDA, “Most drugs consist of pure chemical substances and their structures are known. Most biologics, however, are complex mixtures that are not easily identified or characterized.” Translation:  vaccines contain unknown substances.  Unknown even to the FDA.

Doctors are not trained about vaccines in medical school

Doctors are not taught about vaccines the way they are taught about drugs’ risks and benefits.  I received very thorough training on drugs, but no more than an hours’ training on all vaccines. Thus, doctors usually don’t learn about vaccine adverse reactions until something happens to their own patients.  In the past twenty years, vaccines that caused more problems than they solved (and were subsequently taken off the market) have included Rotashield, Lymerix and Pandemrix. Few doctors were aware of any problems until the vaccines were withdrawn.  Yet this is the proof that vaccines can be either good or bad.

What data do FDA use to license drugs and vaccines?

Do the data become public after licensing a vaccine or drug?

For vaccines, as much else in life, the devil is in the details. And public access to those details (especially regarding safety) is very limited. Twenty years ago, when Congress was examining the safety of vaccines, CDC answered my Freedom of Information Act requests for data on their own anthrax vaccine studies. But for the past ten years they have only provided excuses and stonewalling. 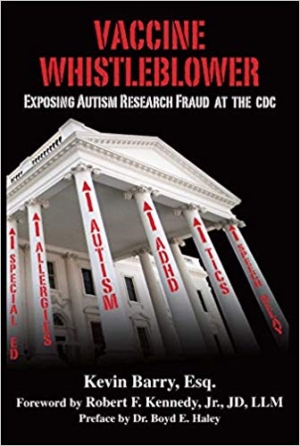 The book Vaccine Whistleblower tells Dr. William Thompson’s story of how CDC employees, including himself, were made to put unwanted data in a garbage can and rework their analyses until a strong statistical association between black males who received an early MMR and becoming autistic just–disappeared.  Then CDC published this doctored paper.

A new Hepatitis B vaccine, Heplisav, may cause a considerable number of excess heart attacks. It may cause other significant problems, and may not be safe in pregnancy. The data needed to resolve all of this don’t exist yet.  FDA licensed the vaccine anyway, asked the manufacturer to conduct the needed studies in tens of thousands of patients (who are unlikely to know they are receiving an experimental product they have paid for) and FDA will look at the studies after they are completed in 2021, 2022 and 2023 to determine if the vaccine is safe.

Heplisav is only the latest example of ‘license first, get the answers later’–at FDA.

The fact is, information on the safety of vaccines is being withheld from the American people by their own government. The only explanation is that the leaders at FDA and CDC have been captured by industry, along with a massive agency-industry revolving door.

That adverse event information for licensed vaccines, drugs and medical devices, collected or generated by federal health agencies–as in this recent FDA scandal — gets hidden, destroyed or does not even exist should be a compelling concern of everyone.