In December of 1993, Scott Allen, a journalist at the Boston Globe, uncovered documents showing years of ethically dubious experiments conducted on Fernald Center youth. The day after Christmas, he published an article, “Radiation Used on Retarded,” noting that “Records at the Fernald State School list them as “morons,” but the researchers from MIT and Harvard University called the retarded teen-age boys who took part in their radiation experiments ‘the Fernald Science Club.'” 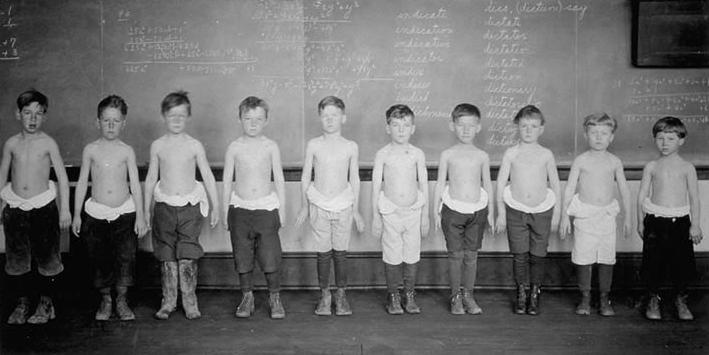 Developmentally disabled children at the Fernald State School and a state School in Waltham, Massachusetts were subjected to radioactive nutrition experiments sponsored by the AEC conducted by Harvard University and MIT researchers. The children were fed Quaker Oats breakfast cereal containing radioactive tracers to test absorption of plant minerals and calcium. Parents were never informed that radioactive elements were involved in the tests.

“In the name of science, members of the club would eat cereal mixed with radioactive milk for breakfast or digest a series of iron supplements that gave them the radiation-equivalent of at least 50 chest X-rays. From 1946 to 1956, scores of retarded teen-agers consumed radioactive food to help the researchers better understand the human digestive process.”

“There is absolutely no ground for caution regarding the quantities of radioactive substances which we would use in our experiments,” Massachusetts Institute of Technology biochemist Robert S. Harris assured Fernald’s superintendent in a letter proposing the research in December 1945. At least some consent forms sent home to parents or guardians do not mention radiation.”

“The experiments at the Fernald School, which almost certainly would not be permitted today, are one of the darker corners of Massachusetts’ atomic legacy. Along with pioneering the field of nuclear medicine, some of the state’s leading academic institutions and hospitals also subjected the terminally ill, the elderly and others to radiation doses that are considered unsafe today, often with no possible benefit to the test subjects.”

Though never secret — researchers published the results of the Fernald studies in scholarly journals — details of the research effort, funded partly by Quaker Oats Co. and the US Atomic Energy Commission, have sat in a jumble of boxes in the Fernald School library until now.

“It’s very important that the public begin to see that secrecy at bottom is what lets this happen,” said David Rush of Tufts University’s Human Nutrition Research Center, who has written a book on radiation exposure to defense workers. He called the Fernald experiments “something of which American medicine should be ashamed.”

But Constantine Maletskos, a former MIT researcher who studied how teenagers at Fernald metabolized radioactive calcium, defended the experiments, saying they yielded important information about nutrition. “I feel just as good about it today as the day I did it,” he said, “The attitude of the scientists was we’re going to do this in the best way possible. . . . They would get the minimum radiation they could possibly get and have the experiment work.”

But Jacob Shapiro, director of radiation protection at Harvard University, declined to say whether the experiments were dangerous, but he stated: “I would ask a colleague of mine, would you let your child get that dose?”

Scott Allen’s article not only ignited a national debate about the ethics of medical research, but it inspired the federal government to launch an investigation into the matter.

In her article, “In Debate on Radiation Tests, Rush to Judgment Is Resisted” Gina Kolata of The New York Times,took a far different approach in reporting the egregious exploitation of helpless, vulnerable children in immoral experiments that indeed,  no researcher would subject his own child to.

Her article is decidedly more sympathetic toward the researchers who conducted the radiation experiments as well as to the infamous Willowbrook experiments, which she credits with the development of the controversial Hepetitis B vaccine. She quotes Dr. Victor Bond, a medical physicist and doctor at Brookhaven National Laboratory, who defended the Fernald experiments, arguing that:

“a question arose as to whether chemicals in breakfast cereals interfered with the uptake of iron or calcium in children. An answer was needed.  One obvious way to do the study, he said, would be to use radioactively tagged trace amounts of iron and calcium and to follow the fates of these minerals in the body when children ate cereals.” (Read Gina Kolata, The New York Times, Jan. 1, 1994)

Scientists who defend radiation and other ethically dubious human experiments on persons who are incapable of refusing, do so from an elitist position of superiority. They continue to harbor the Eugenic ideology which regards human beings not of their class, as the means to an end. 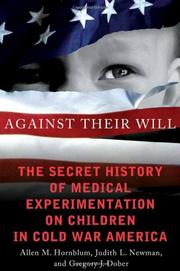 But I was only a kid. I had no interest in getting married, I was only fourteen years old. And to tell the truth, I just wanted out of there,” recalls Charles Dyer…

“Only in recent decades have we begun to shine a light into the dark closet of medical ignonomity and illuminate the many stories of vulnerable subjects who were chosen for their perceived inadequacies and handicaps.”

Read more, Against Their Will: The Secret History of Medical Experimentation on Children in Cold War America by Allen Hornbloom, Judith Newman and Gregory Dober, 2013.