The following are my personal reflections about the profound threat posed by government-dictated mandatory childhood vaccination schedules. I submit these comments at the invitation of the President of the Network Impfentscheid Deutschland (Network for Vaccine Choice Germany) for their Protest Against Forced Vaccination in Berlin,  Sept. 2019. 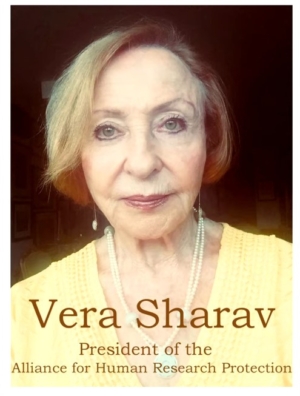 As a child survivor of the Holocaust I learned indelible lessons about the nature of evil. I was 31/2 years old when my family was uprooted & chased out of our home in Romania. We were herded into a concentration camp, where my father died. My experience as a child has sensitized me to the threat posed by government dictates that sever parents’ right to protect their children. Not only is protecting one’s child a parental human right; it is a primal instinct.

My perspective is informed by those painful personal memories, by the historical record, and the magnitude of the evidence in human terms. For me, it is always about the plight of children. I relate to the trauma that children suffer when they are forcibly separated from their parents, because I was once, such a child myself.

The stark lesson to be learned is that medicine can be weaponized when doctors join forces with government & deviate from their personal and professional ethical commitment under the Hippocratic Oath – “First, do no harm”.

The judges in the Doctors’ Trial at Nuremberg set forth the foundational legal code of medical ethics, the Nuremberg Code (1947). The first principle is unequivocal: “the voluntary, informed consent of the human subject is absolutely essential”.

By the mid-1950s, the pharmaceutical industry was a global business whose singular objective was — and remains — profits without regard for the harm caused by a defective drug or vaccine. A prime example of this culture of greed is the irresponsible, criminal marketing of the drug, Thalidomide to pregnant women. The scale of catastrophic harm caused by the manufacturer of that drug, Chemie Grünenthal, was staggering: 100,000 babies were either born dead or severely deformed. The survivors were condemned to lifelong suffering. For almost 50 years the company denied its culpability; protected by the German government, it refused to compensate the victims.

So then, why is the pharmaceutical industry so powerful?

The answer is collusion by the medical establishment, by government, and Big Pharma. This unholy alliance works in tandem to promote widespread uptake of new drugs and vaccines – disregarding the harm caused in pursuit of profits. When signs of serious risks of harm are detected, this triad follows the Grünenthal strategy of denial and cover-up of evidence.[3] The journal Science reported that in April 2017, the U.S. Centers for Disease Control removed public access to vaccine injury data.[4] Furthermore, parents are not told the facts about the short span of time that most vaccines are effective at all.[5]

The integrity of medicine and public health policy has been undermined so that you cannot trust official assurances that government-licensed pharmaceutical products are “safe and effective”.
Examples abound:

I shudder that once again the medical establishment has aligned itself with government casting aside bedrock ethical standards, and endorsing coercive medical policies to override parental objections.

“There is no evidence that in recent years unvaccinated US children have caused a single death from measles, mumps and rubella. Yet how many column inches, how many hours of TV news have been devoted to scaring the American public about the dire threat of measles? Fear of measles has been the major driver of the campaigns to eliminate vaccine exemptions.”

2019 is the year in which the line in the sand has been drawn.
We either preserve medical free choice, or the pharmaceutical-state coalition succeeds in enforcing its agenda backed by state police.

According to the CDC, the percentage of children who are unvaccinated has quadrupled since 2001, even though the overall number of vaccinated children remains high. More than 100,000 American infants and toddlers are unvaccinated; millions more received only some vaccines.[23]

Clearly, these unvaccinated and partially vaccinated children pose no risk to others; as there have been no serious life-threatening outbreaks from any of the childhood infectious diseases. What the vaccine lobby isn’t telling you are evidence-based facts such as the findings of the Mayo Clinic Vaccine Research Group headed by Dr. Gregory Poland, Chair of Merck’s Safety Evaluation Committee, and a consultant to the major vaccine manufacturers:

Pharmaceutical companies are colluding with governments to expand on their much publicized legislative victories in the U.S.

They are using the media, the political party leadership, and professional organizations that have benefitted from industry largesse,[27] to gain support for vaccination mandates. Parents, who resist, are those who have informed themselves about the evidence of harm and the reality of “unavoidably unsafe” vaccines. Some parents have witnessed the tragedy that befell a neighbor’s child following vaccination with multiple-vaccines in one session.

We are at this moment at a crossroad in history:

Governments that have lost public trust are initiating measures to take our freedom of choice away while silencing us.

In January 2019, a major editorial under the headline: “How to Inoculate Against Anti-Vaxxers”[28] signed by the Editorial Board of the New York Times, not only reiterated industry-generated propaganda; it urged state and federal officials to launch an “aggressive and targeted social media campaign” of surveillance; to “monitor anti-vaccine websites” in order to defeat “the enemy”.

In 2019, news outlets such as Huffington Post have also removed dozens of articles about vaccine safety from their website such as: articles that discussed the landmark court case in which the U.S. government conceded that a little girl, named Hannah Poling developed “features of autism spectrum” following vaccination. The article had been posted six years earlier.[30]

Clearly, these industry-funded pro-vaccine collaborators in government, the media, and academia cannot withstand open public discussions about evidence that supports safety concerns about the children’s vaccination schedule. They won’t engage in public debate because their science is rigged, it can’t stand up to independent scrutiny. So they cling to hackneyed categorical pronouncements that will not convince parents who have studied the issues, and gained knowledge about the risks. Informed parents won’t turn a blind eye to the children who need to be protected from a ruthless struggle to maintain high profit margins.

As was the case in 1935, state-supported censorship, and recent government decrees eviscerating fundamental parental rights and the professional judgement of medical doctors, have failed to raise protests from mainstream medicine, from the Ivy Towers of academia, or from the corporate-controlled media. Instead, these powerful institutions are protecting their financial stake in the business of vaccines.

[1] Deadly Medicines and Organized Crime (2013), Peter Gøtzsche; The Truth About Drug Companies: How They Deceive Us and Wat Do About It (2005), Marcia Angell,

[4] A US government website for collecting reports of side effects associated with vaccines is broken. Why has no one noticed? PETER DOSHI, SCIENCE, May 23, 2017

[5] Waning immunity of vaccines is such a significant problem that the National Institute of Allergy and Infectious Diseases sponsored a workshop in 2016. https://www.ncbi.nlm.nih.gov/pubmed/28490424

[9] The HPV Vaccine On Trial: Seeking Justice for A Generation Betrayed, Mary Holland, Kim Mack Rosenberg, Eileen Lorio, 2018; Discrepancies In The Evaluation Of The Safety Of The Human Papillomavirus Vaccine, Memórias Do Instituto Oswaldo Cruz, 2018

[13] The most common general adverse events in ≥ 20% of the subjects are fatigue, headache, myalgia, gastrointestinal symptoms, and arthralgia. In 93% of affected young women the disabling symptoms continue for more than four years. See, Discrepancies In The Evaluation Of The Safety Of The Human Papillomavirus Vaccine, Memórias Do Instituto Oswaldo Cruz, 2018

[22] Table 4-1 Contraindications Federal Vaccination Guidelines are determined by The Centers for Disease Control, Advisory Committee on Immunization Practices (as of August 20, 2019).

[28] Given the Editorial’s uncharacteristic hard-sell marketing style, I strongly suspect that it was written by a major Public Relations firm at the behest of Big Pharma.

[30] Is Vaccine Safety Too Dangerous for Us to Discuss? Bretigne Shaffer, LewRockwell.com, September 3, 2019