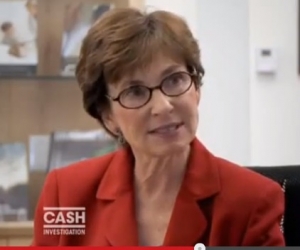 The first woman Editor in Chief of The New England Journal of Medicine, currently Senior Lecturer in Social Medicine, Harvard Medical School. Her book, The Truth About the Drug Companies (2004).

Her rude awakening to the “ubiquitous” conflicts of interest in medicine was when she was pushed out of in her position at the NEJM. In her last editorial in the NEJM, Is Academic Medicine for Sale? (2000) Dr. Angell wrote:

Since then, Dr. Angell has been vocal in her criticism of the influence of money in medicine. Drug Companies & Doctors: A Story of Corruption in The NY Review of Books (2009), 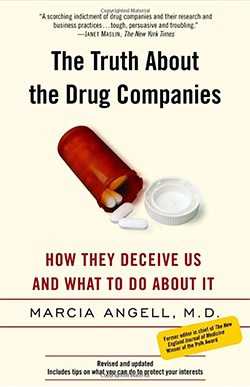 . . . Similar conflicts of interest and biases exist in virtually every field of medicine, particularly those that rely heavily on drugs or devices. It is simply no longer possible to believe much of the clinical research that is published, or to rely on the judgment of trusted physicians or authoritative medical guidelines. I take no pleasure in this conclusion, which I reached slowly and reluctantly over my two decades as an editor of The New England Journal of Medicine.

In 1997, a critical article in the NEJM, by Peter Lurie and Sydney Wolfe (Public Citizen) strongly criticized an unethical NIH-funded HIV study in Africa which raised the issue of ethical double-standards applied in research conducted in underdeveloped, poor countries. In her accompanying editorial, “The Ethics of Clinical Research in the Third World,” Dr. Angell unequivocally took the position that “Human subjects in any part of the world should be protected by an irreducible set of ethical standards.”

Dr. Angell came to recognize psychiatry as the microcosm of commercially successful, but clinically disastrous medicine:

It seems that Americans are in the midst of a raging epidemic of mental illness, at least as judged by the increase in the numbers treated for it. The tally of those who are so disabled by mental disorders that they qualify for Supplemental Security Income (SSI) or Social Security Disability Insurance (SSDI) increased nearly two and a half times between 1987 and 2007 — from one in 184 Americans to one in seventy-six. For children, the rise is even more startling — a thirty-five-fold increase in the same two decades. Mental illness is now the leading cause of disability in children, well ahead of physical disabilities like cerebral palsy or Down syndrome, for which the federal programs were created. (The Epidemic of Mental Illness: Why? New York Review of Books, 2011)

Our health care system is based on the premise that health care is a commodity like VCRs or computers and that it should be distributed according to the ability to pay in the same way that consumer goods are. That’s not what health care should be. Health care is a need; it’s not a commodity, and it should be distributed according to need. If you’re very sick, you should have a lot of it. If you’re not sick, you shouldn’t have a lot of it. But this should be seen as a personal, individual need, not as a commodity to be distributed like other marketplace commodities. That is a fundamental mistake in the way this country, and only this country, looks at health care. And that market ideology is what has made the health care system so dreadful, so bad at what it does. Yes, it does do what markets are supposed to do. It expands. (“Are We in a Health Care Crisis?” PBS)