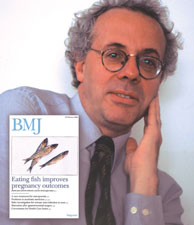 Richard Smith, MD. Former Editor British Medical Journal (BMJ), a founder member of the Committee on Publication Ethics, a trustee of the UK Research Integrity Office. Dr. Smith is a fervent critic of current research and publication practices. In a provocative recent article in Times Higher Education (2015) he states, “It is paradoxical and ironic that peer review, a process at the heart of science, is based on faith not evidence.” He then argues that the current peer review system in biomedicine is worse than no review at all:

“Peer review is supposed to be the quality assurance system for science, weeding out the scientifically unreliable and reassuring readers of journals that they can trust what they are reading. In reality, however, it is ineffective, largely a lottery, anti-innovatory, slow, expensive, wasteful of scientific time, inefficient, easily abused, prone to bias, unable to detect fraud and irrelevant.”

In 1994, he published an editorial by Douglas Altman, “The Scandal of Poor Medical Research,” in which Dr. Altman argued that the reason so much medical research is of poor quality is because

“researchers feel compelled for career reasons to carry out research that they are ill equipped to perform, and nobody stops them. . . We need less research, better research, and research done for the right reasons. Abandoning using the number of publications as a measure of ability would be a start.”

In 1997, he devoted the April 12 issue of the British Medical Journal (BMJ) confronting institutional review boards and healthcare professionals with evidence of their failure to conform to informed consent requirements. He has noted that “Informed consent has degenerated from an important and respectful act to a cumbersome, meaningless regulatory process.” He noted that in the opinion of many researchers the requirement for informed consent impedes research.

In his post on the BMJ Blog (Dec. 9, 2013) “Should Scientific Fraud Be a Criminal Offense?” he argued that “it is time to criminalize research fraud noting that “a systematic review in PLoSonline (May 29, 2009)

“has shown that research misconduct is common, terrifyingly common. . . . There is such a crisis around much of science being plain wrong and never reproduced that an initiative, supported by Science and Nature, has been launched to encourage studies to be reproduced. And examples of people being harmed by fraudulent research mount. . .”
Research misconduct, “the gentlemanly phrase for scientific fraud.”

He noted that the idea of criminalizing is not new: In 2000, Alexander McCall Smith, a professor of medical law and ethics, argued that research misconduct (the gentlemanly phrase for scientific fraud) should be a criminal offence.

Nobody took it seriously, but 13 years later Nature has published an editorial not promoting but contemplating the idea. To me it begins to look like an inevitability that research misconduct will eventually become a criminal offence. . . .

In 2006, he wrote “Research Misconduct: the Poisoning of the Well” (Journal of the Royal Society of Medicine) noting that

“in the past 20 years country after country has recognized increasing examples of fraud and have come to think that it cannot be ignored, but needs to be recognized and managed. . . The Nordic countries have done so, but none of the large countries of the European Union have yet succeeded.

And more recently, in an interview in The New Scientist, he reaffirmed his conviction for the following reasons: First, he notes that researchers have been awarded substantial grants for honest research, so research fraud should be on par with financial fraud. Second, he notes that the criminal justice system is very well adept at gathering evidence and weighing it — something universities are clearly “not very good at”. Third, science has failed to deal adequately with research misconduct.

I believe scientists should be held to a higher standard. Those who commit research misconduct cannot be trusted. It’s too easy to be tempted into ignoring or destroying data that undermines your work. It may seem an inhuman way to be, but a true scientist is delighted when his or her favourite hypothesis is destroyed by good data.

In a recent BMJ article, Medical Research — Still a Scandal (Jan 2014) he writes:

“I wasn’t shocked when we published Altman’s editorial because I’d begun to understand about five years’ before that much research was poor. . . In January 1994 at age 41, when we published Altman’s editorial, I had confidence that things would improve. In 2002 I spent eight marvellous weeks in a 15th century palazzo in Venice writing a book on medical journals, the major outlets for medical research, and reached the dismal conclusion that things were badly wrong with journals and the research they published.”

The Trouble With Medical Journals written in 2003, updated in 2006: notable quotes:

We have little evidence of the effectiveness of peer review but we have considerable evidence of its defects. In addition to being poor at detecting gross defects and almost useless for detecting fraud it is slow, expensive, profligate of academic time, highly subjective, something of a lottery, prone to bias and easily abused. 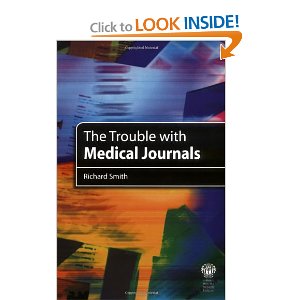 The Trouble with Medical Journals

Research misconduct is a global problem.  Major trials are very good for journals in that doctors around the world want to see them and so are more likely to subscribe to journals that publish them . . . companies purchase large reprint orders of these trials . . . the profit margin is huge.

Some journals have a supplement with every issue, and — to be blunt — the worse the supplement, the bigger the profit.

Tom Jefferson noted in his review of the book,

Far from being revolutionary, it reflects the abysmal state we are in: thousands of biomedical journals publishing worthless or mediocre research paid for by someone else and (in some cases) becoming rich in the process. Mediocre research is mixed in with (we hope, rarely) fraudulent or spun research.

When reflecting on the poor quality of current medical journal publications and the untrustworthy claimed research findings, Richard Smith realizes his judgment then wasn’t tough enough:

I wondered after the book was published if I’d struck too sour a note, but now I think it could have been sourer. My confidence that “things can only get better” has largely drained away, but I’m not a miserable old man. Rather I’ve come to enjoy observing and cataloguing human imperfections, which is why I read novels and history rather than medical journals.” (Richard Smith, BMJ 2014)