An article in STAT News (Nov. 22) suggests that the FDA’s drug approval process and reliance on the “gold standard”will undergo “a seismic shift” in the Donald Trump administration.

“Public health advocates are bracing for a seismic shift: a surrender of the agency’s rules for off-label promotion of drugs; the importation of more drugs from other countries; and fewer requirements for clinical trials — long the gold standard for determining whether medicines are safe and effective.” (“Could the FDA be Dismantled Under Trump?”)

Michael Jacobson, president of the Center for Science in the Public Interest is quoted stating: “Between a Trump presidency and a radically pro-business Congress, the next few years may see a removal of numerous consumer protections.”

However, long before the Trump presidency, consumer protection laws and scientific standards for the approval of both new medicines and genetic engineering of food products have been systematically undermined under previous administrations headed by either party. They have been undermined  by political influence, corporate “pay for play,” and misrepresentation of science and mass dissemination of disinformation. 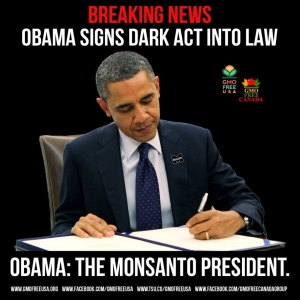 “In a stark demonstration of the power of the agrochemical industry to dictate the terms of our nation’s food safety system, President Obama recently ignored 250,000 petitioners and signed into law Senate Bill 764, known to many as the DARK (Deny Americans the Right to Know) Act.

The DARK Act was boiled up by agrochemical industry lobbyists and their allies in Congress (both Republicans and Democrats) to prevent Vermont from becoming the first state in the country to implement a mandatory GMO labeling on food packaging. Employing the Orwellian style with which the corporate media promotes the false narratives of corporate-corrupted politicians, ABC News made no mention of the Vermont law, instead reporting that the bill “creates a federal labeling standard for foods containing genetically modified ingredients.” White House spokeswoman Katie Hill told ABC News, “This measure will provide new opportunities for consumers to have access to information about their food.”

“the new law, in fact, does the opposite of creating consumer transparency for GMO food. “If Congress were really interested in providing consumers with information, it could have adopted Vermont’s on-package label that companies are already using across the country.”

“Instead, Congress created a mechanism for companies to hide behind QR codes and trample on state efforts to provide their citizens with actual information.  As if this weren’t bad enough, the federal law has a confusing definition of ‘bioengineering’ that gives USDA the authority to determine how much of a product needs to be bioengineered before a label is required, and prevents even the food companies from certain types of disclosure. “

Monsanto and its GMO-pesticide-hawking allies have already corrupted the executive branch agencies such as the Food and Drug Administration (FDA) and Department of Agriculture (DOA) with a revolving door enrichment scheme for government officials. Now they are winning legal claims that federal agencies, originally created to protect public health, should instead serve as legal shields to protect corporations from any and all public safety regulation by local and state governments.

The agrochemical industry’s secret strategy was laid bare on June 15 in the oral arguments for the federal Ninth Circuit Court of Appeals hearing to decide whether to uphold or overturn the Monsanto Doctrine. Their legal position… is that no county or state can take any measure whatsoever to protect the safety and health of its citizens [ ]because those basic constitutional powers are purportedly pre-empted, and therefore invalidated, by the federal government.” 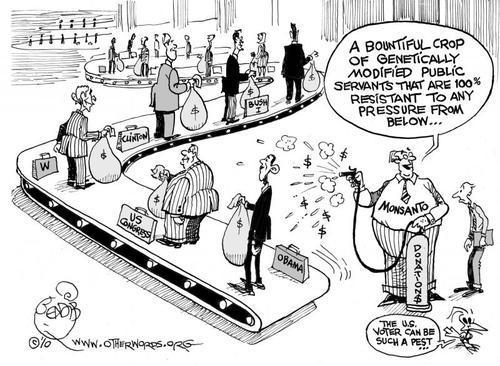 By persuading compliant members of Congress to overwhelmingly pass the DARK Act, the agrochemical industry has extended the Monsanto Doctrine to the legislative branch, securing a seemingly impenetrable fortress around the business of toxic agriculture.

In striking down the Vermont law, Congress has made sure that American exceptionalism, on behalf of corporate donors against basic consumer rights, is a mainstay of U.S. politics. The DARK Act ensures that the United States will not follow the 64 countries around the world that now require plain labeling of GMO food. “What the DARK Act shows us is that multinational corporations are not just lobbying and exercising power; they are literally ruling us,” said David Cobb, outreach director of Move to Amend.

Bernie Sanders was the only national leader to take a vocal stand against the DARK Act. After the Senate passed it, Sanders sounded the alarm bells, writing that,

“The legislation that passed is an outrage and speaks to the power of big money in American politics. The Grocery Manufacturers Association, Monsanto and other agribusiness spent hundreds of millions of dollars against the Vermont law and against other states going forward to protect consumers.”

Politics and the perversion of science:
In 2003, a Report by Committee on Government Reform  identified twenty scientific issues which have been undermined by political interference. The report highlighted examples of distortion, interference and suppression of scientific information under the George W. Bush administration:

In 2009, President Barack Obama signed a statement that said decisions in his administration would be based on science, not politics. An interesting anecdotal article compares FDA regulations issued under President Obama for their wordiness. Even if combined, the Bible, the 7 book Harry Potter series, and the U.S. Constitution don’t come near the number of words used in FDA regulations issued under Obama. The FDA used 2,666,000 word in 545 published rules covering drugs, medical devices, food additives, and animal drugs. (“2,666,000 Words: FDA Rules Issued Under Obama Twice the Length of Bible” Ali Meyer June 2015) But did these regulations support scientific integrity? Did they serve consumer safety or industry profits?

In 2011, his Secretary of Health and Human Services, Kathleen Sebelius overruled FDA Commissioner Margaret Hamburg to approve so-called, Plan B which makes contraceptives available without a doctor’s prescription. Since FDA scientists had recommended approval, the move was seen an unprecedented intervention for political reasons. Dr. Steven Nissen, chairman of cardiology at the Cleveland Clinic, a physician who has been critical of the FDA in the past stated:

“The decision on Plan B by the secretary represents an unprecedented level of interference in the FDA process and puts the country on a slippery slope toward politicization of science. Future political leaders may choose to overrule the FDA on much more critical decisions.”

Peter Pitts, former FDA associate commissioner, currently with the right-leaning think tank that receives drug industry funding, Center for Medicine in the Public Interest called the decision “outrageous.” “It opens up the hornet’s nest of companies lobbying HHS, members of Congress lobbying HHS. It’s a Pandora’s box of a decision.”  Most often, such pressure is mostly brought to bear privately. (“Did The Obama Administration Throw The FDA Under The Bus?” Matthew Herper, Forbes, Dec. 2011)

In 2015, Obama appointed Dr. Robert Califf to head the FDA. Califf is a Big Pharma lobbyist who had received millions of dollars from Eli Lilly, Merck, Novartis, and other drug companies. 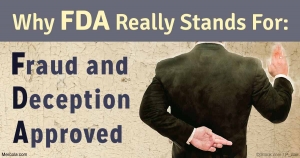 “Califf previously came under fire for helping to establish the Duke Clinical Research Institute, which is funded primarily by pharmaceutical companies.  According to a 2014 “Conflict of Interest Disclosure,” Cahill admitted his close connection to the industry. As TIME summarized, his income is “contractually underwritten in part by several large pharmaceutical companies, including Merck, Bristol-Myers Squibb, Eli Lilly and Novartis. He also receives as much as $100,000 a year in consulting fees from some of those companies, and from others.” The FDA insists Cahill donates his private income to nonprofits.

Even so, Califf’s appointment is hardly surprising. Michael Taylor, the current Deputy Commissioner for Foods at the FDA — also appointed by Barack Obama —  used to be Monsanto’s vice president for public policy. Cabo Activities

Collusion between corporations and the FDA is widely documented. This influence has presumably contributed to many questionable decisions, such as the FDA’s approval of oxycontin for children or the ongoing approval of countless dangerous drugs that are later recalled. (Mint Press News / AntiMedia Oct. 2015)

Under the Obama administration, the Department of Agriculture (USDA) has taken the position of dictating what science is permissible.

“The USDA has relied on industry-friendly interpretations of science in several recent high-profile actions, including approvals of new genetically modified crops and criticisms of an Environmental Protection Agency neonicotinoid review. (The Atlantic, Nov. 2015)

“[Scientists] should refrain from making statements that could be construed as being judgments … on USDA or any other federal government policy, either intentionally or inadvertently.” In other words, “You can do whatever science you like, so long as it doesn’t have real-world implications…The rules allow for scientists to be silenced based on the content of their science.”(The Washington Post, Oct. 2015)

If scientists are prevented from drawing science-based conclusions that have “real-world implications,” then public policies formulated under such restrictions, are not applicable in the “real-world”; they are irrelevant. 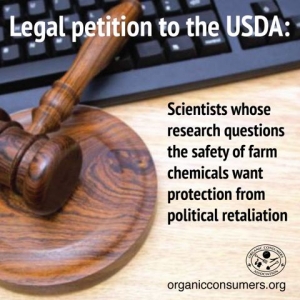