Harvard and the Holocaust (2013) an article by AE Samaan, author of the book, From a Race of Masters to a Master Race,: 1948 — 1848, argues that “scientific racism” which exploded into systematic apocalyptic genocide under the Nazi regime—culminating in the Holocaust —is the end product of a one hundred year trajectory of close collaboration between prominent U.S. and German eugenicists.  The undisputed leaders of the eugenic movement were Harvard graduates and professors,

“arrogant elitists who, without exception, desired a centrally planned society where a scientific caste was entrusted with the political powers to decide who lived and who died, who was segregated, and who was allowed to contribute to society. They proclaimed their views to be “scientific.” (A.E. Samaan, Harvard and the Holocaust,  2013.)

Charles Davenport founded the International Federation of Eugenics Organizations (IFEO), formalizing the close collaboration between American, British and German eugenicists. Davenport served as IFEO’s first president collaborated with Eugene Fisher — who became the second IFEO president — on a survey “documenting” the supposed inferiority of Africans of mixed ethnicity. IFEO was instrumental in laying the ground for Hitler’s eugenic state.

Dr. Edwin Katzen-Ellenbogen was an American eugenicist and psychiatrist trained in Germany and France with Harvard credentials in abnormal psychiatry with expertise on faking symptoms and hypnosis. He was a founding lifelong member of the Eugenic Research Association and chief eugenicist of New Jersey under Governor Woodrow Wilson. Although he had long ago renounce his Jewish lineage and was an American citizen, he was arrested and deported in 1943.

He became a notorious physician-prisoner and SS collaborator at the Buchenwald concentration camp — one of the worst slave labor camps where prisoners were systematically worked to death, killed by beatings, starvation or execution, and as a result of ghastly medical experiments. Katzen-Ellenbogen also conducted hypnotic experiments to extract information and confessions for the Gestapo.

“Katzen-Ellenbogen’s power in the Little Camp was…extraordinarily large one…He was the man who was feared by the prisoners in the little camp as ‘the man in the background.’ He had under his command the block doctors…and his influence upon them was considerable.. Katzen-Ellenbogen was publicly accused of finishing off a thousand men with injections [20cc of phenol]…He never directly denied being involved in injections…”

Edwin Black describes Katzen-Ellenbogen’s disingenuous performance as a witness at Nuremberg and as a defendant at the Dachau trials failed to get him off the hook; he was found guilty and sentenced to life in prison. 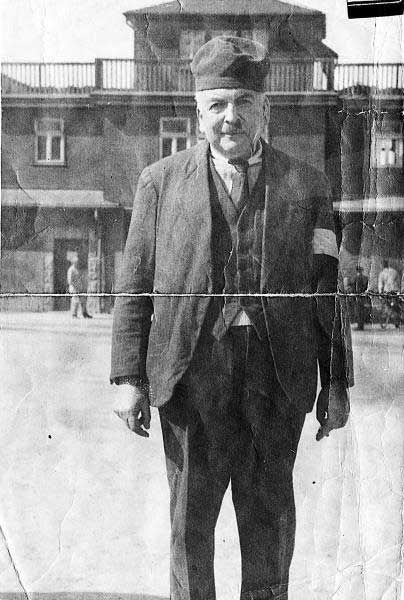 “As a skilled and doctrinaire eugenicist, Katzen-Ellenbogen was assigned to perform eugenic examinations of Polish prisoners, seeking those fit for Germanization. Eugenic certification saved them from extermination.

Katzen-Ellenbogen engaged in all manner of medical charades. “[ ] I manufactured all kinds of new forms of insanity and made false reports about their condition. As the invalids were not sent out at that time, they were probably saved from being gassed at one of the extermination camps.” Katzen-Ellenbogen did not save others in a similar fashion, just the fifty or so Polish prisoners he eugenically certified as possessing Aryan qualities.

Katzen-Ellenbogen was an expert at faking symptoms. While on the witness stand at his trial, he was asked if someone could be trained to feign symptoms. He bragged, “To throw a fit? With training, he could do it. I myself, for instance, could give a wonderful performance in that respect.” Asked if a specialist could be fooled, Katzen-Ellenbogen rejoined, “Yes. But not a real specialist.” (Edwin Black, War Against the Weak: Eugenics and America’s Campaign to Create a Master Race, 2003)