The National Heart Blood and Lung Institute (NHBLI) has embarked on a far-ranging, dubious unethical experimental research paradigm that puts vulnerable, (often) critically ill patients at increased risk of harm; merely to document the resulting harm. Thousands of patients accross the United States are being subjected to experiments that put them at increased risk of serious harm without their knowledge. Informed consent documents fail to disclose the serious risks — such as death. 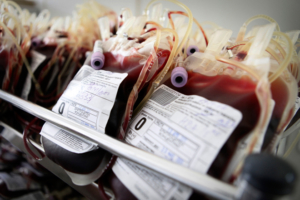 An example of such a NHBLI sponsored experiment is Red Cell Storage Duration Study (RECESS) which was part of the Transfusion Medicine/Hemostasis Clinical Trials Network across the country at 33 medical centers. See participants’ list at clinicaltrials.gov

Some patients were transfused using proven beneficial new blood while others were randomly assigned to receive old, stored blood. Prior studies had indicated there was an increased risk of post-operative complications when old, stored blood was used. Indeed, the RECESS protocol indicated that death was a risk:

“Many of the red blood cells that stay intact develop membrane damage and lose their flexibility.  Research is needed to determine whether such physical and biochemical changes adversely affect patients who receive stored blood.”

“Researchers will track the participants’ health and compare outcomes between the two groups, such as death rates one month following surgery; post-operative complications such as stroke, heart attack, kidney failure, pulmonary embolism (blockage of an artery in the lungs), and sepsis (a life-threatening infection); and the need for mechanical ventilation.”

“In patients undergoing cardiac surgery, transfusion of red cells that had been stored for more than 2 weeks was associated with a significantly increased risk of postoperative complications as well as reduced short-term and long-term survival.”

Despite the knowledge that stored old blood poses serious risk for patients –as had already been documented – i.e., “reduced short-term and long-term survival”— researchers subjected unwitting patients to an experiment that would adversely affect them. Researchers put these patient-subjects at increased risk of death – merely to re-confirm the foreseeable damaging effects of old blood.

Read the letter of complaint filed by the Alliance for Human Research Protection.

RECESS follows a pattern of ethically dubious experiments sponsored by NBHLI in which critically ill patients are randomized into one of two experimental treatment interventions with no standard care control group. By failing to include a current practice treatment as a control comparator, the experimental design sacrificed patient safety as it sought to maximize statistical outcome differences.

Most of these critically ill patients are not in stable mental or physical condition; they cannot, therefore, give valid informed consent to experimental research.

The NHBLI has adopted this dubious modus operandi for experiments conducted on vulnerable, incapacitated, critically ill patients, a high percentage of who are poor African American. These patients are being used as guinea pigs in a variety of physiological survival experiments that were traditionally conducted in animals, not human beings.

Officials of the NHBLI — Simone Glynn, MD, chief of the Transfusion Medicine and Cellular Therapeutics Branch —  disingenuously claimed such experiments may help “people with sickle cell disease” – a disease affecting primarily African Americans—when they were, in fact, exploiting them and exposing them to increased risk of death.

“Until now, few projects have tried to distinguish complications that may result from the patient’s underlying illness from those that may arise from the transfusions themselves,”

“The findings could open opportunities for personalized transfusions…For example, if researchers discover that people with sickle cell disease suffer complications from a certain component of transfused blood, then those patients could be given red blood cell transfusions devoid of that component.”

The informed consent documents failed to disclose “death” or “mortality” as a risk for patients; it used vague and misleading language: Under the heading “possible risks, side effects, and discomforts,” the patient informed consent states:

The NHBLI website states that it had awarded eight grants for blood storage experiments. “The NHLBI is also supporting eight different studies that will examine what changes red blood cell units undergo when they are prepared and stored, as well as whether those changes affect the blood vessels and tissues once transfused.”  [According to the last updated information (May 2015) at clinicaltrials.com, 1,481 patients were enrolled in RECESS.]