Carl Elliott, MD, PhD, is professor at the Center for bioethics, University of Minnesota, the author of several books including White Coat, Black Hat. In 2014 Dr. Elliott received the Pellgrino Medal to honor his contributions to healthcare ethics.

For several years he has focused attention on the deadly corruption of clinical trials; the catalyst for what has become Dr. Elliott’s crusade was the tragic case of Dan Markingson a 26-year old who was enrolled in 2003 in AstraZeneca’s CAFÉ trial while he was in the throws of a psychotic episode, at his own University of Minnesota. In that mental state, he was, by definition mentally incapacitated – and therefore, incapable of giving informed consent. Within 6 months of being in the study, he committed suicide in May 2004, while ingesting the prescribed drug Seroquel.

Those involved in his enrollment had significant financial interests in the trial and in meeting its enrollment quota. They violated fundamental national and international ethical standards. Psychotic, mentally incapable patients were coerced with the threat of involuntary commitment to become subjects in a commercially-driven drug trial.

“Most bioethicists are professionally, personally and financially dependent on the medical-industrial complex — which is, let’s face it, unjust and corrupt. So bioethicists have to close their eyes to a lot of wrongdoing if they expect to survive. Either that or pretend that they are working behind the scenes to make things better from the inside. That requires a lot of self-deception.”

The investigators callously ignored Dan’s rapidly deteriorating condition; disregarded his mother’s repeated desperate pleas to withdraw him from the study because she recognized the danger signs: “Do we have to wait for him to kill himself or someone else before anyone does anything?” Three weeks into the study Dan was found in the shower after having slit his throat so violently that he was nearly decapitated. Dan Markingson’s suicide can be attributed to the medical researchers’ “depraved indifference to human life.”

Internal AstraZeneca documents indicate that the CAFÉ study was designed to serve two purposes: a “regulatory” purpose and a “commercial” purpose. The regulatory purpose was to “produce data that will help us defend the Seroquel label.” The commercial purpose was to “produce data that will enable us to generate commercially attractive and competitive messages in relation to diabetes and weight. Experts such as Dr. Peter Tyrer, editor of the British Journal of Psychiatry confirm that in scientific terms the study was of little value.

If so, as Carl Elliott concludes:

“the study in which Dan Markingson committed suicide was not simply a matter of inadequate informed consent, or financial conflicts of interest, or even failure to monitor a subject’s care. The ethical breach was built into the study from the start. It is one thing to ask people to take risks for science, or the common good, or to help other people. It is another thing entirely to ask them to risk their lives for the marketing goal of AstraZeneca.”

This case encapsulates the tragic consequences of a broken system
Medical research as currently structured is not designed to detect the hazards for human subjects. Market-driven research is NOT designed to take steps to prevent predictable hazards. Indeed, the authorized institutional ethics review board (IRB) and government officials charged with ensuring that clinical trialists adhere to federal regulations for the protection of human subjects, fail to carry out their public mandate. Instead of protecting human subjects from unjustifiable risks and / or exploitation — as is their mandate — those entrusted with authority shield the commercial and academic stakeholders.

Dr. Elliott has put his career on the line by confronting the academic medical research power structure at his university and beyond by bringing to public light gruesome evidence of an unconscionable human experiment conducted on vulnerable mentally incapable subjects — that breached every ethical/legal standard. He deserves the greatest honors for his courageous public crusade for an independent investigation into a case of extreme research abuse. Standing up against powerful interest groups has not been easy, 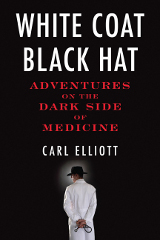 “. . . as far as I can tell it has made me a hated figure at the University of Minnesota, at least, in the Academic Health Center. Not a single administrator at the university has said anything supportive or sympathetic, even in private. I’ve seen people duck in doorways when they see me coming.”

I’m [ ] ashamed to be associated with a field that has elevated working for powerful, corrupt corporations into a mark of professional status. So speaking out is a way of distancing myself. Still, I’m often surprised by how many people in bioethics agree with me and tell me so, in private. I just wish that some of them would speak out publicly. But how can you really blame them, when that would mean alienating some of the most powerful people in the field? Maybe they see me as a kind of useful stooge who is dumb enough to say the rude and unpleasant things that nobody else wants to say.  [Interview in PLoS, 2011]

See A Referenced Summary of the Dan Markingson Case
The University of Minnesota continues to shield itself and the perpetrators of this egregious experiment behind a wall of silence, and immunity from prosecution. Dr. Elliott has put his career on the line by confronting the academic medical research power structure at his university and beyond by bringing to public light gruesome evidence of an unconscionable human experiment conducted on vulnerable mentally incapable subjects — that breached every ethical/legal standard.

The 2015 report of the Office of the Legislative Auditor, State of Minnesota conclusion:
“the Markingson case raises serious ethical issues and numerous conflicts of interest, which University leaders have been consistently unwilling to acknowledge. They have repeatedly claimed that clinical research at the University meets the highest ethical standards and dismissed the need for further consideration of the Markingson case by making misleading statements about past reviews. This insular and inaccurate response has seriously harmed the University of Minnesota’s credibility and reputation.”