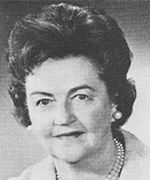 Bernice Eddy, PhD (1903–1989) a virologist and epidemiologist at NIH, identified SV40, a cancer-causing monkey virus that millions of children were exposed to from contaminated polio vaccines.

In 1954, while the NIH was testing the first commercial polio vaccines, Eddy’s job was to test the vaccines from five different companies. She and her staff worked around the clock testing each of the vaccines on 18 monkeys: “This was a product that had never been made before and they were going to use it right away in children.” She discovered that the inactivated vaccine manufactured by Cutter Laboratories contained residual live poliovirus; as a result the monkeys were getting paralyzed. Dr. Eddy reported her findings accompanied by pictures of the paralyzed monkeys to William Workman, head of the Laboratory of Biologics Control. Her effort to avert the spread of the polio virus to healthy children failed because her finding was not well received. NIH director, William Sebrell was notified of her findings, but he chose to ignore them and her findings were never given to the vaccine licensing advisory committee. The Cutter vaccine was licensed along with the others; as a result, 40,000 children were sickened with “abortive polio”; 56 children developed paralytic polio; and five children died in what is known as “the Cutter Incident.”

Instead of promoting her and putting her in charge of the polio vaccine program, they took her off polio altogether and put her back on flu viruses. But Dr. Eddy began to take an interest in cancer. Understandably resentful about being punished as a whistle-blower, Dr. Eddy and Dr. Sarah Stewart who was working at the National Cancer Institute collaborated and found that a virus Dr. Steward had been working on caused cancer in every animal. They called the virus SE polyoma (using their initials). Women scientists were a rarity and they were rebuffed by the male honchos who denigrated their work which did not follow the prescribed modus operandi — they were convinced that cancer was caused by virus.

In 1959, despite having been removed from polio research in 1955, Dr. Eddy began to conduct polio vaccine safety studies. In 1960, Dr. Eddy discovered that an extract of monkey kidney cells used to propagate the polio vaccine caused tumors in newborn hamsters. She surmised that the monkeys carried a cancer-causing virus. Her supervisors nonplussed; they tried to keep her discovery quiet but Dr. Eddy presented her data at a cancer conference in New York. The cancer-causing virus was isolated by other scientists and dubbed SV40 — the 40th simian virus discovered. She followed up and identified SV40 as the virus present in these cells and in the Salk polio vaccine that had caused tumors in hamsters.

NIH officials regarded her discovery as a threat to a pivotal public health policy; namely, mass vaccination. They tried to muzzle her, but in 1960 she presented her findings to the NY Cancer Society; whereupon NIH blocked her from publishing her findings. Meanwhile, Dr. Maurice Hilleman, Merck’s Chief vaccine expert, published similar results at the same time, leading Merck to voluntarily withdraw its killed-virus polio vaccine.

In 1962, Dr. Eddy finally published her findings in the journal of the American Societies for Experimental Biology reporting that the polio vaccine contained SV40, a cancer causing virus. In 1961 federal health officials ordered vaccine manufacturers to screen for the virus and eliminate it from the vaccine. But they kept the discovery of SV40 cancer risk under wraps and never recalled existing contaminated vaccine stocks. For two more years millions of additional children were needlessly exposed — bringing the total to 98 million Americans from 1955 to 1963. Eventually, Bernice Eddy lost her labs. In successive measures she was denied permission to attend scholarly conferences, her papers were held up, and finally she was removed from vaccine research altogether.

Dr. Eddy’s treatment became a scandal within the scientific community and was discussed in Senate hearings. Medical historian, Prof. Edward Shorter interviewed both Dr. Bernice Eddy and Dr. Maurice Hilleman. Here are his observations about the trials and tribulations of Dr. Eddy and Dr. Stewart:

“It may be that these women were treated as they were not because of overt discrimination but because they evidenced a somewhat different scientific style than did many of their male colleagues. Stewart’s intuitive sense that cancer was caused by viruses is a case in point, and her attempts to prove something that she felt in her heart to be true met with great skepticism. (Dr. Joseph Smadel was Dr. Eddy’s chief was Associate Director of NIH) Why had Smadel gone after Bernice Eddy?

Maurice Hilleman: “well, because she never had definitive experiments. When you bet up an experiment, you set up the controls to go with it. You can’t have public health being upset by experiments that may not be meaningful and that are not definitively run. They tore the hell out of her for that.” In Eddy’s defense, she was aware at the time that all the campus lab animals she might have taken as controls were contaminated with the virus. But what Hilleman and other men were saying, in essence, was that these women lacked rigor, lacked system, that they were too intuitive. “And yet she was right,” added Hilleman.

By contrast, when Hilleman told Smadel the same thing that Bernice Eddy had told him, Smadel listened. Eddy and Stewart had soft scientific styles; Smadel and Hilleman had hard styles, and hard personalities to go with them. Whether Eddy and Stewart had the right style or not, their polyoma virus and SV 40 went on to form the basis of the revolution in biotechnology, which is the story of the scientific present and future. (Edward Shorter, The Health Century, 1987; 195–99 excerpt; Michael Horwin. Simian Virus 40: A Cancer Causing Monkey Virus from FDA-Approved Vaccines, Albany Law J of Sci & Tech, 2003; excerpted at SV40 Cancer Foundation.)