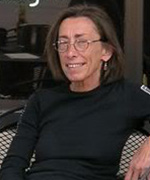 Nora Coffey is a prominent women’s health advocate, activist and educator who founded the Hysterectomy Educational Resources and Services (HERS) Foundation in 1982. The foundation is the only independent nonprofit organization solely dedicated to the alternatives to and aftermath of hysterectomy.

In 1978, Nora Coffey, then in her mid-thirties, had surgery which sent shock waves throughout her body and changed her life forever. The operation removed both her uterus (hysterectomy) and her ovaries (castration). However, contrary to what Coffey had been advised by both her medical and lay resources, their removal produced changes in her body which left her emotionally and physically crippled.

Prior to the operation, Coffey describes herself as “a strong, healthy, vigorous woman, working as a researcher in biochemistry.” Then she says she began to experience annoying, irregular vaginal bleeding which lasted nearly a year. Without exploring any other method of treatment, says Coffey, her doctor advised a hysterectomy. Before consenting to the surgery, Coffey researched the subject in local libraries and questioned women she knew who had already gone through the operation. According to Coffey, all her resources agreed with her physician — be done with the messy bleeding, be freed from the worry of pregnancy, be a new woman, have the hysterectomy. The physical and cognitive after-effects of the hysterectomy were devastating.
Read an in-depth interview with Nora Coffey conducted by Lee Rothberg, a Registered Nurse at the Woman’s Newspaper, Princeton, NJ (1986)

In 1982, Nora founded the organization called HERS (Hysterectomy Educational Resources and Services) which gathers both medical and lay information on the alternatives to hysterectomy and the known risks and complications of the surgery.

Informed consent would require that all women be given full disclosure about the surgical risks and permanent physiological and psychological changes brought on by hysterectomy.

Nora has lectured extensively in the United States and in Europe. Coffey has been a guest lecturer in medical schools, nursing schools, undergraduate and graduate programs. She has been invited to present papers to Women and Gender Studies Conferences and women’s health organizations. She has testified at FDA hearings and works with FDA to ensure the reporting of adverse events of uterine artery embolization (UAE), also called uterine fibroid embolization (UFE).

In 2004–2005 she led the only nationwide protest against hysterectomy. The protest took place in front of hospitals in every state, every day, for a year.

Nora Coffey has been interviewed by 20/20, Oprah Winfrey, Phil Donahue, and Good Morning America. Interviews with Coffey have appeared in The New York Times, Los Angeles Times, Philadelphia Inquirer, Boston Globe, New York Magazine, Newsweek, USA TODAY, Ms. Magazine and others. She produced Rick Schweikert’s play Un becoming which premiered Off-Broadway in 2004. It was subsequently seen in 23 other cities and produced in Washington, D.C. in 2005. Barbara Seaman, the acclaimed women’s health advocate and author of The Greatest Experiment Ever Performed on Women: Exploding the Estrogen Myth said of Schweikert’s play “Every woman, man and child should see this play!”

She is currently working toward a sustainable legal remedy to end hysterectomy without the information requisite to informed consent. 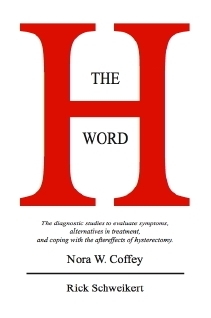 Her book, co-authored by Rick Schweikert, empowers women, providing the facts they need to know about the consequences of a hysterectomy; the questions to ask a doctor who recommends a hysterectomy; and the alternative solution. The H Word takes an unflinching look into the complex environment of hysterectomy and those who enable it. It explores issues of sex, power, and money in the most common non-obstetric surgery performed in America.