“Every person shall have the right freely to express and disseminate his opinions in speech, writing, and pictures and to inform himself without hindrance from generally accessible sources. Freedom of the press and freedom of reporting by means of broadcasts and films shall be guaranteed. There shall be no censorship.”

Books  — such as The Rise of the New Normal Reich by CJ Hopkins, Are banned Germany, Austria and the Netherlands. 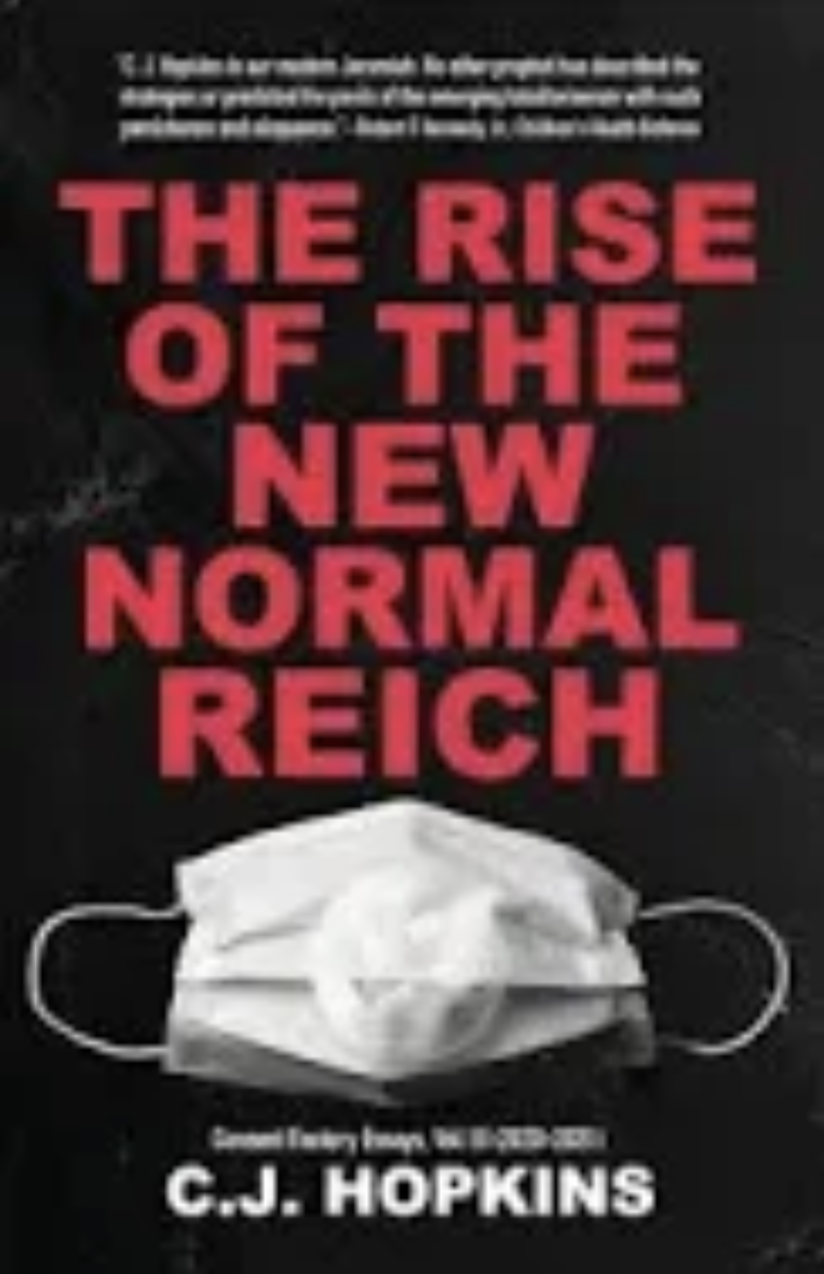 Following my speech at the 75-year commemoration of the Nuremberg Code, a dishonest article in Nuremberg Nachrichten (News) that portrayed me as an imposter. The article stated that I was a “Romanian” who was introduced as a Holocaust survivor. The author/ publisher avoided mentioning that I am Jewish – which was the reason that my family was deported and sent to a concentration camp in Ukraine.

The newspaper, Nurenberg Nachrichten, occupies the very same building as did the ultra Nazi weekly tabloid, Der Stürmer published by Julius Streicher who used the publication to disseminate vicious anti-Semitic diatribes. He used the publication as a platform for calculated smear campaigns against specific Jews.

In addition to the veiled anti-Semitic article, a criminal complaint has been filed against me with the Nuremberg police — asserting that I trivialized the Holocaust!

The group or individual who filed a criminal complaint against me is following the Nazi Goebbels’ playbook. They are trying to silence dissent through intimidation, vilification, and fomenting hate. These are intermediary steps that inevitably lead to persecution.

The hypocrisy of Germany’s government
The lessons of the Holocaust are being perverted to silence those of us who recognize ominous parallels between the early phases of repression and discrimination – the phases that led up to and culminated in the Holocaust — and the repressive, discriminatory decrees of 2020.

This video of an altercation between a German railroad official and a Black passenger was recorded on a German train, in August 2022. It is a shameful demonstration of how the masking requirement is being used to abuse. German RR altercation UhbB9KuQESAPf-A7.mp4 https://video.twimg.com/ext_tw_video/1559185486744358913/pu/vid/320×566/UhbB

Stepan Bandera, the extreme Ukrainian nationalist and Nazi collaborator
is given a shrine in Munich and in Ukraine

The German government and the city of Munich are lending respectability to Stepan Bandera, a leader of the militant, terrorist branch of the Organization of Ukrainian Nationalists (OUN) and its armed force, the Ukrainian Insurgent Army actively participated in this genocidal rampage.

Bandera became a Nazi collaborator who lived with his deputies under German protection after World War II began. The OUN played a significant role in the extermination of the Jews and other ‘undesirables,’ often performing the dirty work of the German Einsatzkommando extermination squads (e.g. the murder of children).

“Historian Karel Berkhoff, among others, has shown that Bandera, his deputies, and the Nazis shared a key obsession, namely the notion that the Jews in Ukraine were behind Communism and Stalinist imperialism and must be destroyed.

When the Germans invaded the USSR in June 1941 and captured the East Galician capital of Lvov, Bandera’s lieutenants issued a declaration of independence in his name.  They further promised to work closely with Hitler, then helped to launch a pogrom that killed four thousand Lvov Jews in a few days, using weapons ranging from guns to metal poles.  “We will lay your heads at Hitler’s feet,” a Banderist pamphlet proclaimed to Ukrainian Jews.”

Bandera’s Ukrainian Insurgent Army (UPA) were responsible for multiple mass murder atrocities—including Babi Yar, the largest massacre outside of Kiev— where more than 34,000 Jewish men, women, and children were slaughtered in a two-day shooting spree. Banderists collaborated with their Nazi allies in implementing the Nazi Jewish policy in Ukraine, which eventually killed over 1.5 million Ukrainian Jews.

“OUN militias were key actors in the anti-Jewish violence of summer 1941; OUN recruited for and infiltrated police formations that provided indispensable manpower for the Germans’ mobile killing units; and in 1943, thousands of these policemen deserted from German service to join the OUN-led nationalist insurgency, during which UPA killed Jews who had managed to survive the major liquidations of 1942.”

This is a truth that many in Ukraine, particularly in its western parts, deny.  In his book Erased (2007), the eminent historian Omer Bartov describes the large bronze statue of Bandera that stands in a park in the east Galician town of Drohobych. Most of the 15,000 Jews who lived in Drohobych were murdered.  The park stands on the site of the town’s former Jewish ghetto, but there is not so much as a plaque in the park to memorialize the Jewish dead.  [Who Was Stepan Bandera?  by Norman J.W. Goda https://historynewsnetwork.org/article/122778 ]

Bandera is widely acclaimed as a hero in Ukraine – as are other Ukrainian ultra-nationalists who collaborated with the Nazis and participated in carrying out the Holocaust in murderous shooting sprees.

The government-funded Ukrainian Institute of National Memory is institutionalizing the whitewashing of Nazi collaborators. Last summer, the Ukrainian parliament featured an exhibit commemorating the OUN’s 1941 proclamation of cooperation with the Third Reich (imagine the French government installing an exhibit celebrating the Vichy state!).

Torchlight marches in honor of OUN/UPA leaders like Roman Shukhevych (a commander in a Third Reich auxiliary battalion) are a regular feature of the new Ukraine.

The whitewash even extends to SS Galichina, a Ukrainian division of the Waffen-SS; the director of the Institute of National Memory proclaimed that the SS fighters were “war victims.” The government’s embrace of Bandera is not only deplorable, but also extremely divisive, considering the OUN/UPA are reviled in eastern Ukraine.

Predictably, the celebration of Nazi collaborators has been accompanied by a rise in outright anti-Semitism.

Azov’s blatant Nazi ideology has been confirmed by multiple Western news outlets: The New York Times called the battalion “openly neo-Nazi,” while USA Today, The Daily Beast, The Telegraph, and Haaretz have documented the Azov members’ proclivity for swastikas, Nazi salutes, and other Nazi symbols. Individual Azove fighters have also acknowledged being neo-Nazis.

In recent years, multiple streets in Ukraine have been named for leading Ukrainian Nazi collaborators such as: Roman Shukhevych, whose troops are believed to have killed thousands of Jews. Shukhevych and Bandera are among the men being celebrated as heroes today for teaming up with Nazi Germany against the Soviet Union during World War II.

Today, increasing reports of far-right violence, ultranationalism, and erosion of basic freedoms are giving the lie to the West’s initial euphoria. There are neo-Nazi pogroms against the Roma, rampant attacks on feminists and LGBT groups, book bans, and state-sponsored glorification of Nazi collaborators. 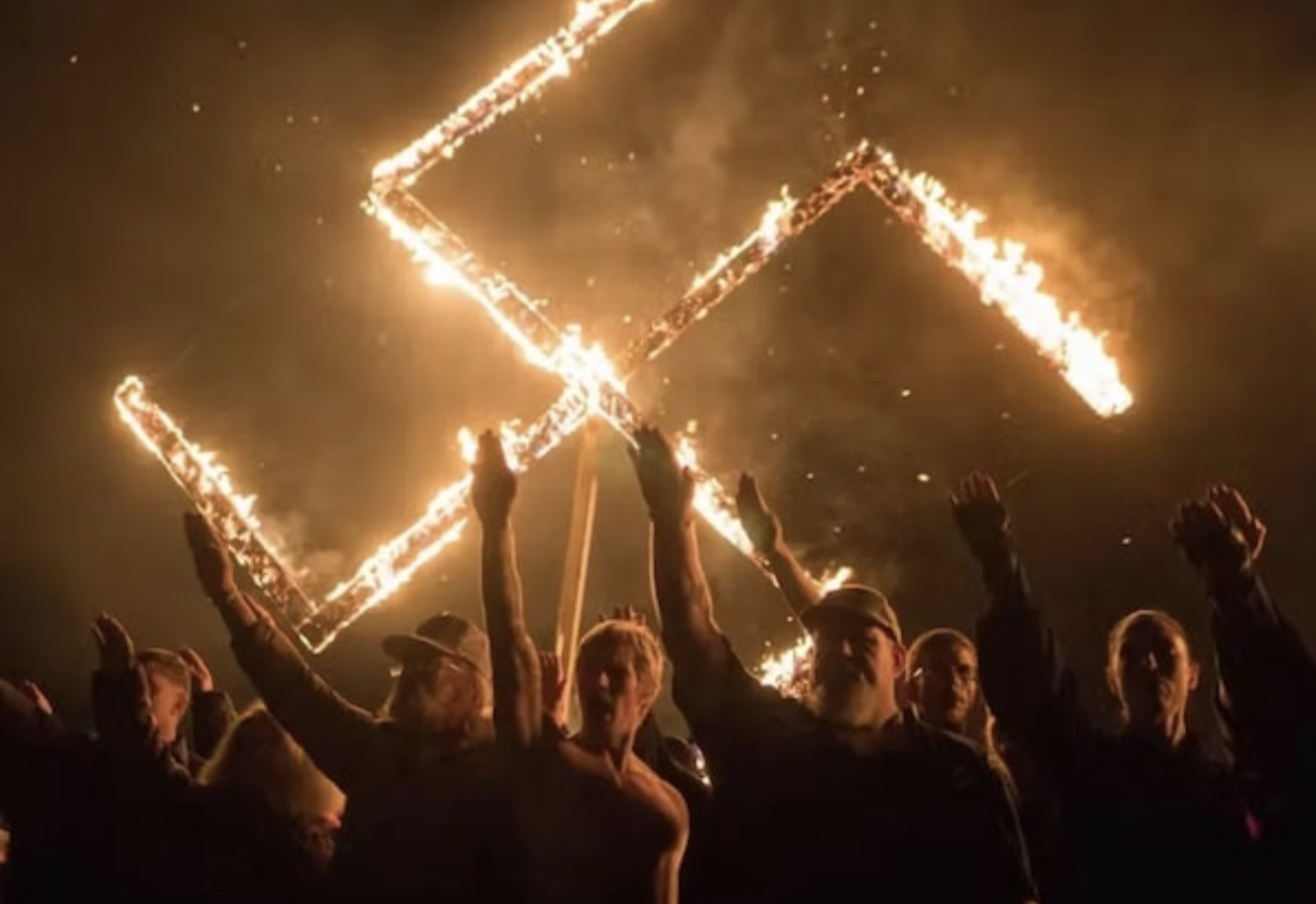 Meanwhile Western journalists are being sanctioned for reporting the facts. Journalists who challenge NATO narratives are now “information terrorists” https://mronline.org/2022/08/29/journalists-who-challenge-nato-narratives-are-now-information-terrorists ]

German journalist Alina Lipp has been sanctioned and threatened with prosecution by the German government for reporting on the daily atrocities committed by Ukrainian Nazi forces against civilians in Donetsk and Lughansk. Lipp told Stalkerzone:

“They just closed my bank account. Then they closed my father’s account. A month ago, I noticed that all the money disappeared from my account – 1,600 euros. I realised that something was happening in Germany. A few days ago, I received a notification from the prosecutor’s office, and a criminal case was opened against me for supporting the special operation. In Germany, special operations are considered a crime, and I am also a criminal. I face three years in prison or a huge fine.”

British journalist Graham Philips has been sanctioned illegally by the UK regime without any investigation. Philips was not given a ‘right to reply’. Most mainstream media reports on this violation of his human rights describe Philips as ‘one of the most prominent pro-Kremlin online conspiracy theorists’. A familiar smear deployed by NATO-aligned media outlets is to dehumanize and discredit challenging voices.

Philips like many other journalists being targeted lives in Donbass which has been threatened with brutal ethnic cleansing by the NATO proxy Ukrainian Nazi and ultra-nationalist forces since Washington’s Victoria Nuland- engineered coup in 2014.

These journalists transmit the voices of the Russian-speaking Ukrainians who have been subjected to horrendous war crimes, torture, detention and persecution for eight years and ignored by the West. For this they are now to be designated ‘information terrorists’ – because they expose terrorism sanctioned by NATO member states.

Organizations are springing up in the UK like Molfar Global whose ‘Book of Orcs’ project employs 200 alleged volunteers to identify ‘Russian (Orcs) war criminals’ and to compile a legal ‘kill list’. The ‘Orc’ terminology is another dehumanization process, converting Russian citizens and military into fantasy science fiction monsters to soften western publics to the measures being taken to silence and punish them for…being Russian or speaking Russian. They state on their website homepage:

Every Russian occupier must be identified and punished according to the law. War crimes and crimes against Humanity have no statute of limitations. That is why we set ourselves the goal of finding everyone and preventing them from escaping justice

The organizers of the round table were the National Security Service Academy, the U.S. State Department/Department of Defence-funded Civilian Research and Development Fund (CRDF Global Urkaine), the International Academy of Information, the U.S. state department-linked National Cyber Security Cluster.

If you oppose imperialist wars, racism, Nazism, terrorism, violent extremism, global health tyranny, technocratic supremacy, predator class elitism and pharmaceutical-controlled Eugenics- you are a ‘terrorist’. We are all ‘terrorists’.