There appears to be a major disconnect between the scientific evidence about the safety and efficacy of the MMR vaccine and the HPV vaccine and the extraordinary high profit garnered by Merck from the sale of these two vaccines.

“concerns lurk, unnoticed for the most part. Despite the [sic]gains measles is reemerging as a serious public health threat, and outbreaks are occurring even in highly developed countries where vaccine access, public health infrastructure, and health literacy are not significant issues. This is unexpected and a worrisome harbinger – measles outbreaks are occurring where they are least expected… since 2005 these outbreaks have also occurred in the U.S.—with surprising numbers of cases occurring in persons who previously received one or even two documented doses of measles-containing vaccine. In fact, as of September 2011, the U.S. has had 15 measles outbreaks with 211 confirmed cases—the highest number of cases since 1996. Where data exist such outbreaks result from both failure to vaccinate, and vaccine failure.”
The Re-Emergence of Measles in Developed Countries: Time to Develop the Next-Generation Measles Vaccines

Below is the CNBC report highlighting the Key Points

An additional key point: Merck has a virtual monopoly on both of these blockbuster profit-generating vaccines in the U.S.

In 2006, Merck launched the HPV vaccine, promoting a school-entry mandate. Its modus operandi was to lobby state legislators with bags of cash.

Merck’s successful lobbying method for its vaccines has not changed in 2019.

Question:  How much $$$ did Merck contribute to the campaign chests of the New York State Legislators Who Voted — Without a Single Public Hearing – to Eliminate the Religious Exemption From the state’s mandatory Childhood Vaccination Schedule?

Sales of children’s vaccines, which includes the New Jersey-based company’s MMR vaccine, for measles, mumps and rubella, jumped 58% year over year to $675 million, Merck announced in its second-quarter earnings report Tuesday. Merck, which is the sole U.S. supplier of measles vaccines, said the strong growth was due in part to this year’s measles outbreak, which was the largest in the U.S. since 1992.

“There was some buying to the private sector within the U.S. this quarter based on some of the measles outbreaks that you read in the news,” Merck Chief Commercial Officer Frank Clyburn said in a post-earnings conference call with investors. “And we do believe that we’ll continue to see growth for our pediatric vaccines going forward.”

Shares of Merck were up more than 1% in midmorning trading after posting quarterly earnings and revenue that easily beat Wall Street’s estimates. The company also narrowed its earnings and revenue forecast for the year due to its $1 billion acquisition of biotech firm Peloton Therapeutics, announced in May.

In May, Merck said it had increased production of the measles vaccine to meet an uptick in demand in the U.S. in the midst of the country’s biggest outbreak in decades. 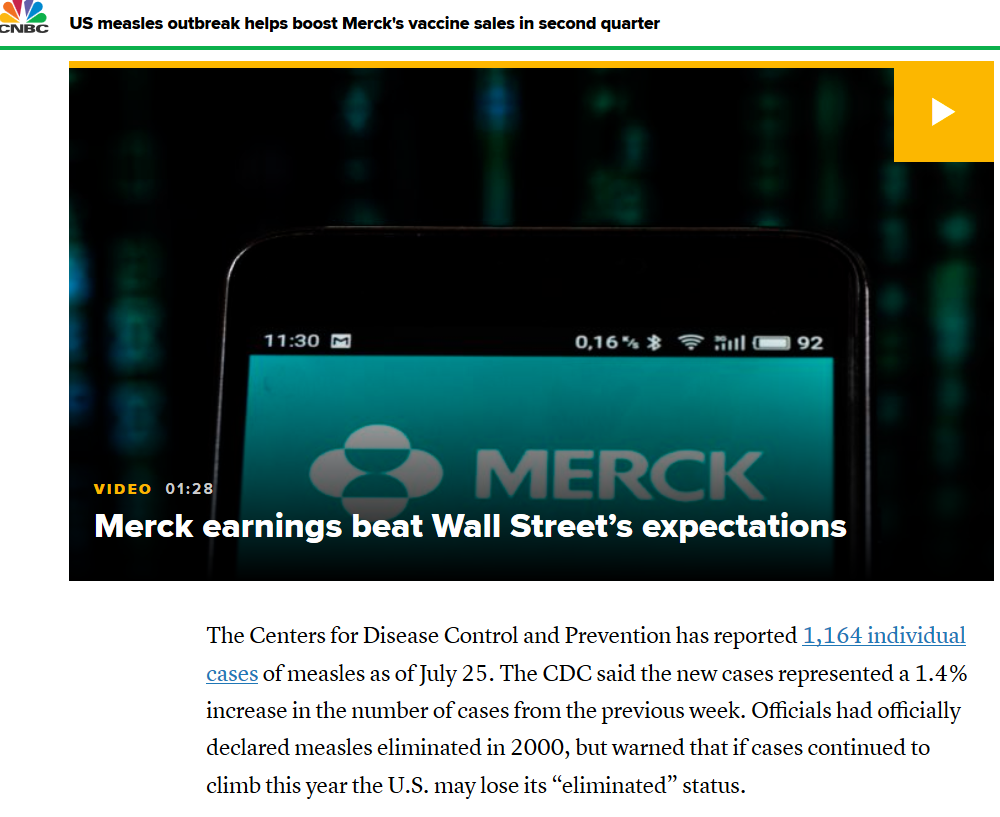 The Centers for Disease Control and Prevention has reported 1,164 individual cases of measles as of July 25. The CDC said the new cases represented a 1.4% increase in the number of cases from the previous week. Officials had officially declared measles eliminated in 2000, but warned that if cases continued to climb this year the U.S. may lose its “eliminated” status.

Before the creation of the measles vaccine in the 1960s, the disease infected an estimated 3 million to 4 million people, hospitalized 48,000 and claimed the lives of between 400 and 500 people annually.

Measles started to spread again in recent years as more parents refused to vaccinate their children, even though health officials stress immunizations are the best way to protect against the measles. The World Health Organization reported a 300% increase in measles cases in the first three months of this year compared with the same time last year.