Before the Third Reich, German anatomists relied on unclaimed corpses from hospitals, psychiatric facilities, and prisons; but prisons were a minor source because Germany executed fewer than 20 civilians a year between 1907 and 1932. After the Nazis gained control, the government meted out death sentences for even minor infractions, such as “defeatism” or telling political jokes. Between 1933 and 1945, German prisons executed at least 16,000 civilians. Nazi anatomists in Germany and Austria became an integral part of capital punishment under the Nazis.

Each anatomical institute was assigned to a prison facility that possessed an execution chamber, and anatomists received advance notice of executions. They participated in State tyranny who sought the bodies of murdered victims of the regime which they dissected for research, teaching, and for illustration purposes.

In Vienna, a special streetcar, dubbed the “Death Transport” transported the bodies between the court and the medical school in the early morning. (Heather Pringle. “Confronting Anatomy’s Nazi Past,” Science
Magazine, August 16, 2010) 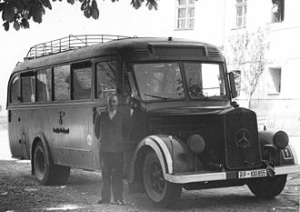 Dr. Sabine Hildebrandt, currently the leading researcher who is analyzing the anatomical department records of 31 universities in Germany and its occupied territories (Austria, Poland) during the Nazi regime (from 1933 to 1945) has concluded that “all of them — without exception — received bodies of the executed from execution chambers.” By her estimate, 10 German anatomical institutes received at least 3,228 executed corpses. (Gill. Victims of Nazi Anatomists, BBC, Jan. 27, 2013)

“The Nazi Anatomists,” an article in Slate (Nov. 2013) by Emily Bazelon, identifies some of the idealistic young German anti-Nazi dissenters whose corpses haunt modern science. The tainted origins of German and Austrian anatomical research — their experiments, medical education and accumulation of human tissues and body specimens capitalized on the Nazi supply of human body parts. Those plundered human bodies continue to haunt German and Austrian science inasmuch as academics have not fully grappled with the full implications.

“The [ ] overview of currently available data on [Nazi] victims whose bodies were used for anatomical purposes reveals that an estimated total number of bodies delivered to departments of anatomy lies at more than 40,000, and the so far documented number of executed persons among them at a minimum of 3,749. . . So far, about 500 Nazi victims’ names and biographies have been at least partially identified.” (Victims of NS [Nazi], 2013)

Additional articles about German anatomical collections at ResearchGate and ScienceDirect

A decisive paradigm shift in German medicine
Germany’s moral degradation was amplified by the inhumanity of its leading physicians at renowned medical research institutes who violated every professional and human moral precept. Medical atrocities by renowned medical academics escalated from the acquisition of dead bodies for anatomical experimentation to experiments on living people destined for execution. The experimentation on “future dead” persons represented a major moral paradigm shift in medical research.

Medical scientists had what seemed a limitless supply of human subjects whom they dismissed as “specimens”, “experimental material”, and “rabbits.” When given the opportunity by the governing regime, and funding from the military, industry and various public health agencies, German and Austrian doctors demonstrated the danger that arises from the clinical detachment of physicians from those whom they regarded as morally or genetically inferior. Once they disavowed their humanity, doctors demonstrated depraved indifference to the real human suffering they caused.

Doctors subjected their victims to excruciatingly painful and dangerous invasive medical interventions that had never been tried before on humans; they measured and observed their physiological endurance under extreme stress; in freezing temperatures, and starvation diets. They destroyed reproductive organs with X-rays and chemicals; forced abortions and dissected the fetuses; in a word, they applied their medical knowledge to torture, mutilate, and dissect living and dead human beings; selecting body parts to be harvested – eyes, testicles, brains, whole skeletons – and collected vast amounts of blood – for further research.

Dr. Hermann Stieve, Chief of the Institute of Anatomy at the University of Berlin where he conducted studies on the effect of stress and environmental factors on women’s reproductive system. Like other anatomists, he had difficulty obtaining human bodies for his studies before the Nazis came to power, as there were few executions in Germany — none of women. The Nazis changed all that with thousands of civilian executions each year for political crimes and minor offenses including an “unprecedented number of women” who became available to Stieve; 182 victims of whom 174 were women, their ages ranged from 18 to 68, with most being of reproductive age; two thirds were German.

Stieve compiled a list of those bodies (in 1946) with annotations of detailed information he had obtained about the health and circumstances of the women. That information and his examination of the women’s tissues and organs enabled him to chart the impact of fear and psychic trauma on women’s menstrual patterns. Stieve contributed to their terror by telling women prisoners the date they were scheduled to be put to death; then he timed the execution with the Gestapo removing the women’s pelvic organs for tissue analysis immediately following their execution. He drew two conclusions that continue to be cited; he determined that the rhythm method doesn’t effectively prevent pregnancy. And he discovered that chronic stress—awaiting execution—affects the female reproductive system. Stieve’s list was retrieved 70 years later; the files are held at the Memorial Site for the German Resistance in Berlin.

Among those whose bodies were delivered to Stieve’s laboratory after being executed were some of the notable members of the small German resistance movement, known as the Red Orchestra. These included Libertas Schultz-Boysen and her husband Harro Schutze-Boysen, Arvid Harnack and his American wife, Mildred Harnack, Liane Berkowitz.

Libertas Schulze-Boysen was born in Paris in 1913 and spent her childhood in Liebenberg, near Berlin. She joined the National Socialist Party (NSDAP) in 1933, but left it in 1937 and became heavily involved in the German resistance with her husband Harro Schulze-Boyse, she also collaborated with writer Günther Weisenborn on a theater play, “Die guten Feinde” (“The Good Enemies”) and collected photographs documenting National Socialist crimes of violence. Libertas was executed in 1942.

Liane Berkowitz, a pregnant teenager at the time of her arrest; she was executed at the age of 20, despite recommendations from the Reich Court Martial to Hitler to pardon her.

Cato Bontjes van Beek was born in Bremen in 1920; she was a ceramicist with strong religious beliefs. With her sister Mietje, she helped French prisoners-of-war and persecuted Jews and had contacts with resistance groups. She was arrested in 1942 and executed on 5 August, 1943 in the Plötzensee Prison in Berlin.

Effriede Scholz, sister of the novelist Erich Maria Remarque, who was executed for “undermining morale,” also landed at Stieve’s laboratory. His major research acquisition were the bodies of 182 mostly German execution victims: 174 women, most of reproductive age — among them, two pregnant women, and eight men who were executed at Plötzensee prison for political reasons.

Elise Hampel was born in Bismark in 1903 and started working as a maid soon after finishing elementary school. When she found out that her brother had been killed in action in France, Elise and her husband Otto resolved to resist the Nazi regime. Their method was simple: they hand-wrote protest postcards with messages like “German people wake up!” and “Hitler’s war is the worker’s death!” and left them around Berlin. Elise and Otto were executed in 1943. Hans Fallada’s novel Jeder stirbt für sich allein (Every Man Dies Alone) is based on their story.

Marianne Baum was born in Saarburg in 1912 and, like many of Stieve’s victims, became involved in the Communist resistance soon after 1933. Along with her husband Herbert Baum, Marianne founded the German Communists of Jewish origin resistance group. Marianne and Herbert were arrested in 1942 and executed in Berlin-Plötzensee on 18 August, 1942.

Vera Obolensky was born in Russia in 1911; moved to France with her family after the Russian Revolution. Vera Joined a French resistance group soon after the occupation of France in 1940. Under the pseudonym “Vicky” she became the secretary of the Civil and Military Organization. . . Vera was arrested and tortured by the Gestapo in 1943, but refused to speak. After D-Day she transferred to Berlin where she was executed on Aug. 4, 1944.

Dr. Sabine Hildebrandt cross checked the file with Stieve’s list and in 2013 she published a group portrait of those victims, including their names, dates of birth and death, their nationalities, and reason for their execution. She noted that “None of them volunteered to be dissected, nor were the anatomists at the time interested in the victims’ personal background.” (Clinical Anatomy, 2013) The BBC reported Dr. Hildebrandt’s findings (2013) and posted a gallery of some of Stieve’s “doomed women.” [pullquote]“None of them volunteered to be dissected[/pullquote]

Stieve drew two conclusions that continue to be cited; he determined that the rhythm method doesn’t effectively prevent pregnancy. And he discovered that chronic stress—awaiting execution—affects the female reproductive system. A controversy surrounds the claim that Stieve also studied the effect of rape on women before their execution. (Seidelman. Medicine and Murder, 1999) Stieve published his findings in 230 papers in medical journals, including the case of a 22-year-old woman who “had not menstruated for 157 days due to nervous agitation.” Less predictably, he noted that some women experienced “shock bleedings.” (Bazelon. Slate, 2013)

Emily Bazelon (Slate, 2013) reports that Dr. Andreas Winkelmann, (a German doctor and lecturer in anatomy at Stieve’s Charité hospital, in Berlin, who has defended Stieve against harsh criticism) relayed an incident to her, which she interprets as “a strange story that supports [Winkelman’s] interpretation of Stieve as “blinded by science,” not ideology:” In 1944, Stieve dissected one of his own friends, Walter Arndt, a doctor and zoologist who converted to Judaism in 1931. He was executed after being convicted for criticizing the Nazis. According to Winkelmann, “Stieve took out his heart and kept it.”

Stieve’s research interest was women’s menstrual cycle; having written 230 papers on the effect of stress on the female reproductive system. We find it absurd to suggest that by dissecting his former friend, Dr. Walter Arndt, demonstrated that Stieve was “blinded by science” as opposed to ideological fanaticism. Not being a woman, for Stieve Arndt was not a subject of “scientific” interest.

Like almost every other German and Austrian doctor who has been complicit in the Nazi atrocities, Stieve was never professionally penalized or prosecuted. After the war, he denied that the bodies he had dissected and conducted research on were executed political prisoners. He continued to direct the Institute of Anatomy and serve as dean of the Faculty of Medicine at Humboldt University, East Berlin until his death from a stroke in 1952. The Bavarian Academy of Sciences and Humanities called the accusations against his war activities “spiteful and false.” He was elected to the German Academy of Sciences in Berlin, and the Royal Swedish Academy of Sciences, among others. A lecture room and sculpture of his bust were dedicated in his honor at the Berlin Charité Hospital. (Seidelman, Medicine and Murder in the Third Reich, 1999).

Stieve’s obituaries in both the professional scientific journals and the lay press, were glowing without ever mentioning his negotiations with Plötzensee Prison over the timing of executions to ensure the daily delivery of fresh bodies. They lauded him as a highly respected scientist who loved hunting and mountaineering.

Endonuclease Fingerprint Indicates a Synthetic Origin of SARS-CoV-2  SARS-CoV-2 is the virus that caused the disease COVID-19.   END_OF_DOCUMENT_TOKEN_TO_BE_REPLACED