Ravensbrück operated under strict SS rules noted for its regimentation, terrorization, brutality and humiliation. The policy was strictly enforced by specially trained female SS guards; many of who were vicious and capable of horrific sadistic brutality.

The new female guard had a specific status in the SS hierarchy; like SS men, they benefited from the status of employees of the Reich, and they came under the jurisdiction of the SS. But unlike their male equivalents, they were not formally members of the SS; they were officially designated, “women auxiliaries” of the Waffen SS;” civil employees within a paramilitary organization.  Female guards reported to the camp commandant and the higher ranks of the SS who were always men. However, the female guards exercised direct power and control over the prisoners, and many of them used their power to torture with impunity. (Elissa Mailänder. The Violence of Female Guards in Nazi Concentration Camps (1939-1945), February, 2015) 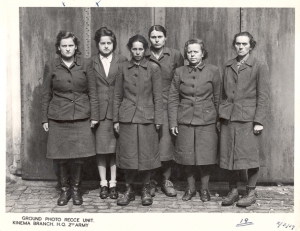 Ravensbrück was the training ground for female SS supervisors and guards for the women’s sections of the entire 15,000 Nazi camp system. Of the approximate 50,000 concentration camp guards, 3,500 to 3,700 were women. (Bazyler. Forgotten Trials of the Holocaust, 2014; Violence of Female Guards, 2015, Encyclopedia of Mass Violence)

”They were trained in treating the prisoners to a constant barrage of foul language and threats, to blow to face, head, and body using fists or truncheons, to kicking them with their booted feet, or setting their dogs at the prisoners to bite their legs…On entering the gates, these new arrivals would stare in horror and disbelief at the corpse carts, the emaciated forms squatting around the kitchen block and the crematorium furnaces billowing smoke.”

“Ravensbrück also had […] a formal system of punishment. Its prison included a punishment block . . . where prisoners were incarcerated in solitary confinement, total darkness, and near-starvation. By the beginning of 1940, [Heinrich] Himmler had introduced flogging for female camp prisoners (25 lashes, once, twice, or three times) causing extreme suffering and many deaths. (Judith Buber Agassi. Jewish Women Prisoners of Ravensbrück: Who Were They? 2008)

Female perpetrators of atrocities – Hitler’s Furies
The coercive hierarchy of the camp also encouraged the guards – many of who were nurses – to brutalize prisoners. Whether by training or personal inclination, female guards committed unbelievably sadistic violent murderous crimes for which only a few were prosecuted. Sixty female guards were prosecuted; of these, 21 were executed. (Alette Smeulers. Female Perpetrators: Ordinary or Extra-Ordinary Women? International Criminal Law Review, 2015)

Fifteen former Ravensbrück guards, including a kapo inmate were tried at the Hamburg Ravensbrück trial; they were  convicted and sentenced to death by hanging. (Female Concentration Camp Guards; Women of the SS) Theodora (Dorothea) Binz, Ravensbrück’s chief wardress and chief training instructor for the SS women guards whose savage cruelty went even beyond SS standards . She terrorized the inmates with her whip and German Shepherd who would, without any provocation kick a woman to death or select her to be killed.  In one 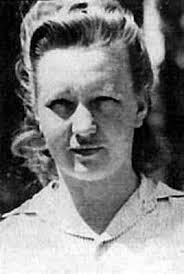 Theodora (Dorothea) Binz, Ravensbrück’s chief wardress and chief training instructor for the SS women guards whose savage cruelty went even beyond SS standards . She terrorized the inmates with her whip and German Shepherd who would, without any provocation kick a woman to death or select her to be killed.  In one case, Binz observed a woman in a work detail who, she felt, was not working hard enough:

“[Binz] walked over to the woman, knocked her to the ground, and then took a pickaxe and proceeded to chop the prisoner with it until the lifeless body was little more than a bloody lump. Once this matter was finished, Dorothea cleaned her shiny boots with the dry portion of the corpses’ skirt. She then mounted her bicycle and leisurely peddled her way back to Ravensbrück – all as if nothing happened.” (Tom Clark. “The Beautiful Beast”: Why Was Irma Grese Evil? 2012) 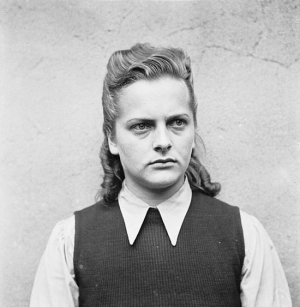 Perhaps the most notorious sadistic Nazi female guard was Irma Grese, who attained the high Nazi rank of SS female Supervisor. She began her career as a concentration camp guard at age 19; serving at Ravensbrück  (July 1942 until March 1943); then transferred to Birkenau-Auschwitz, where she was in charge of 18,000 female prisoners. She returned to Ravensbrück in January, 1945 and ended her career at Bergen Belsen. Grese was a sexual psychopath and sadist who earned a niche in the history of Nazi atrocities. She is described in many memoirs as “the paragon of evil,”

“a beauty noted for sadistic cruelty. She had a proclivity for breast whipping. She would then arrive at the infirmary to observe the excruciating operations performed on her victims’ breasts “with apparent sexual excitement.” (Representing Auschwitz, 2013; Wendy Lower, Hitler’s Furies, 2014; Ryan Jenkins. Irma Grese & the Holocaust, 2014)

According to one witness at her trial she had killed approximately 30 prisoners a day. (The Beautiful Beast, 1996; cited by Smeulers, 2015, p. 215) Beyond the accusations presented against her at the Belsen Trial, two medical doctors  — Dr. Giselle Perl (1948) and Dr. Olga Lengyel (1948) — who were inmates at Auschwitz describe in their published accounts how Grese tortured and mutilated women prisoners to satisfy her sadistic sexual perversions.  Ravensbrück was a place of brutality and death that systematically limited the number who survived.

Ruth Neudeck, ran the gas chambers at Uckermark, a sub-camp of Ravensbrück where over 5,000 women and children died under her authority;  Maria Mendel, is “credited” with responsibility for the deaths of up to 500,000 prisoners at Auschwitz; Gerda Steinhoff, Elisabeth Becker, and the so-called “beautiful spectre‟ Jenny -Wanda Barkmann. 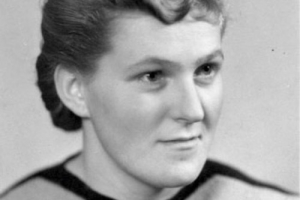 Hermine Braunsteiner had gained entry to the United States, but in 1973 was extradited to face trial in Germany. She was convicted for the murder of 80 people, abetting the murder of 102 children, and collaborating in the murder of 1000 other people. Reports often claim that the German authorities regarded Braunsteiner as being jointly responsible for over 200,000 deaths during the war.

“Hermine chose to abuse the woman and children and whipped several woman to death.
As she worked with other SS guards she would stomp some of the woman to death. This way she earned the nickname The Stomping Mare. For her work, she was awarded the War Merit Cross, 2nd Class in 1943. She would carry a special whip that would automatically kill the victim… a witness [testified] that Hermine “seized children by their hair and threw them on trucks heading to the gas chambers.” (Naomi B. Testimony YouTube, Dec. 2012)

Elfriede Rinkel worked as a guard at Ravensbrück between June 1944 and April,1945, precisely the period during which the most intense mass murders took place. She had gained entry to the U.S. but her past caught up with her at age 84 when she was deported from the USA in 2006.

“The level of abuse the female concentration camp guards participated in was shocking and included medical experimentation, selection, sexual abuse, beatings, infanticide, and more. It is difficult to understand what may have led women to act this way.  Socioeconomics or background don’t seem to play a role, as the women came from all walks of life and demonstrated that anyone can be capable of violence and murder.

“The most [ ] shocking part of this research is that personal choice remains an overwhelming commonality among the female camp guards – whatever the reasons were behind their actions, they chose to commit horrific atrocities against other human beings.” (Wendy Sarti. Why Sadism Violence and Identity in Women and Nazis: Perpetrators of Genocide and Other Crimes During Hitler’s Regime (1933-1945) 2011)