Safety and Effectiveness of the MMR vaccine

Safety and Effectiveness Information from CDC and DHHS
I’ve been asked to contrast the risk from tIhe disease measles with the risk from the measles vaccine, usually the MMR. MMR stands for Measles, Mumps, Rubella (rubella is german measles) and so the MMR vaccine contains 3 live, attenuated (weakened) viruses that reproduce in the body of the person receiving the vaccine. Live vaccines usually provide a stronger immune response than a killed vaccine, which does not reproduce in the body after being injected. However, there are risks from vaccination, and some MMR vaccine recipients develop symptoms from mild forms of the three diseases. Note that the MMR-V, a newer vaccine, has varicella (chickenpox) added to the MMR components, and is associated with a higher rate of adverse event reporting and federal vaccine injury compensation than MMR.

The Rubella virus component can cause joint pain in up to 25% of women. The Mumps component can cause swollen glands in 1 in 75 recipients. One in 3,000 recipients will have a seizure. One in 30,000 develops ITP (Idiopathic Thrombocytopenic Purpura) due to the measles component, in which autoimmune destruction of platelets occurs that can be life-threatening. There is a ten-fold increase in incidence of ITP during the 6 weeks following vaccination.

Rarely, there may be lasting seizures, deafness, coma or brain damage, and deaths post-vaccination. These illnesses are termed, for purposes of federal compensation, encephalitis or encephalopathy. 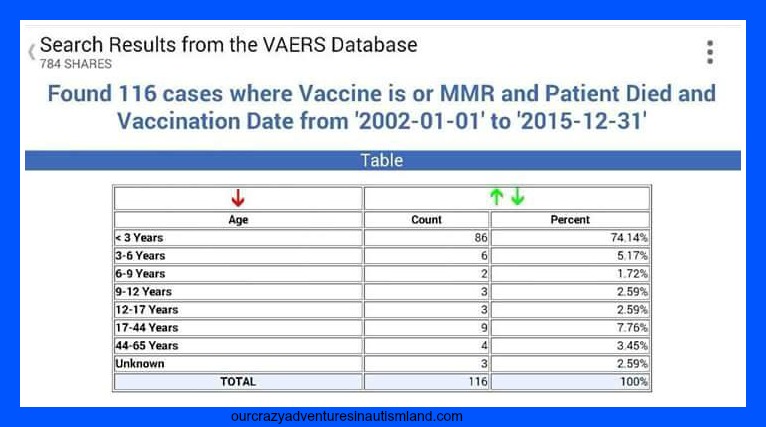 Through March 2014, 967 claims had been made to the program for vaccines against measles. These claims included 58 deaths.

Thousands of reports to the joint FDA-CDC Vaccine Adverse Event Reporting System have been made regarding adverse effects that occurred in close proximity to an MMR or MMR-V inoculation, including several hundred reports of deaths. However, there is no systematic review of most of these reports, and no determination is made as to whether the vaccine caused the reaction, in the vast majority of cases.

Herd immunity is working. Protection against measles was estimated by CDC at 93% after one dose of MMR and 97% after a second MMR. Most vaccinated children are posed no harm by an exposure to measles. It is primarily the unvaccinated who are at risk. But the risk of a serious sequela from measles is small, and as I noted in my last blog post, using CDC’s numbers, I can only find one child who has died in the US from measles during the past 12 years.

The chance of being exposed to measles in the US today is less than the chance of having an adverse reaction to a measles vaccine. But measles is an unpleasant illness. Being unvaccinated or being vaccinated–well, each choice poses its own risks.

Luckily, we have some choice whether to vaccinate or not. Or to delay vaccination. Life is never risk-free. But in this case, you may choose your risk.

UPDATE Feb. 18: I contacted CDC to resolve the contradictions in their data. The Division of Viral Illnesses at CDC responded today, and confirmed that the last death in the United States from acute measles occurred in 2003. Snopes is wrong, and I have asked Snopes to correct their post.

UPDATE Feb.22: Snopes failed to change their website despite receiving a copy of the CDC memo affirming that the last US measles death was in 2003. I must presume Snopes is not as interested in promoting the truth as it claims. 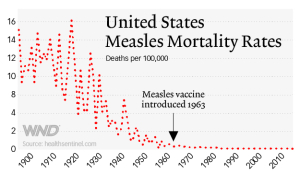 (88%) were associated with importations, and 225 (25%) involved hospitalization. Two deaths were reported.

There have been no reported measles deaths since 2011. Therefore, as best I can tell, there have been only 3 US measles deaths since 1993. Because two government databases provide contradictory information as to when those deaths occurred, and how many occurred, Snopes might be right, or my claim of none since 2003 may be right. But the CDC measles experts should be more likely to know the correct numbers than those providing US mortality data for all causes. Here are my additional sources:

Orenstein in 2004 noted that deaths had declined to zero from measles: “Annual US measles deaths have declined from 408 in 1962 to 0 from 1993-present [213].” According to the National Immunization Program, “No measles deaths were reported to NIP during 1993–2001.” Hinman noted in 2004: “During 1993–1999, only 1 acute measles-related death was reported to the NCHS and no deaths were reported to the NIP. This is consistent with the extremely low reported incidence of measles in the United States during these years.” Clearly, there have been only a small number of deaths from measles since 1993.

According to CDC, before the MMR vaccine, in the 1950s, there were an estimated 3-4 million cases of measles in the US yearly, and an average 440 deaths: one death in about 7-10,000 cases. About 1 in 4,000 cases developed permanent brain damage from measles.

These data are consistent with what I previously found. Pundits who keep claiming that measles kills one in 1,000 affected children, which was no longer true by the 1950s, haven’t bothered to check the facts. (I have heard about the 1/1000 deaths from measles for decades–it is a persistent urban myth that may have hung on due to the dearth of mortality data in recent decades. So few children die from measles in the US, we cannot reliably calculate a case fatality rate.

How effective is the MMR vaccine and how long does protection last? It depends on the study. Duration seems to be at least 15 years, but it does drop over time. Delaying a child’s first vaccination from the currently recommended 12-15 months (or age 6 months for foreign travel) makes the vaccine more likely to be effective. That is one reason I would delay, especially if there was a small risk of exposure and the child was otherwise healthy.

Here is what CDC had to say in 2013 about the effectiveness and duration of protection of measles vaccines:

Duration of Measles Immunity after Vaccination  Both serologic and epidemiologic evidence indicate that measles-containing vaccines induce long lasting immunity in most persons (148). Approximately 95% of vaccinated persons examined 11 years after initial vaccination and 15 years after the second dose of MMR (containing the Enders-Edmonston strain) vaccine had detectable antibodies to measles (149–152). In one study among 25 age-appropriately vaccinated children aged 4 through 6 years who had both low-level neutralizing antibodies and specific IgG antibodies by EIA before revaccination with MMR vaccine, 21 (84%) developed an anamnestic immune response upon revaccination; none developed IgM antibodies, indicating some level of immunity persisted (153).