The Globalists View Pandemics as a High Profit Investment Opportunity

“The last thing anyone is looking for is profit.”  — Donald Trump, US President,

The coronavirus pandemic has exposed an intricate global web of corruption; a virus far more insidious than Covid-19. The virus of corruption has infected virtually every institution that governs or influences public health policies around the globe. Governments, national and international institutions—including foundations, and universities that profit handsomely from their “nonprofit” – tax exempt status, and the media – are infected; as is  the media, both corporate- owned and government-supported media.

The allure of a coronavirus vaccine is the vast global market for this vaccine; a market that encompasses seven billion people.  The allure of a Covid-19 vaccine is that the demand for the vaccine will undoubtedly translate into trillions of dollars. Not only will the manufacturers profit, but investors and a global network of public-private partnerships will profit as well.

A powerful international network of “public-private partnerships” between government agencies, global financial institutions, pharmaceutical companies, academic institutions, “non-profits” and “philanthropic” foundations have been actively laid strategic plans before the Covid-19 pandemic, having recognized that a pandemic presents enormous opportunities.The financial planning stage had been established in 2016 and 2017in anticipation of a pandemic.

The leading institution is the World Bank which has developed “some of the most innovative catastrophe risk insurance instruments in the market” ostensibly, to help developing countries manage risk. In the past ten years the institution has executed approximately $1.6 billion in catastrophe risk transactions.[i]

In 2016, at the G7 meeting in Japan, the World Bank created the Pandemic Emergency Financing Facility (PEF). In January 2017, the Center for Global Health Science and Security (GHSS)[ii] at Georgetown University Medical Center in partnership with the Harvard Global Health Institute ,[iii] organized a gathering of global health experts from academia, government and advocacy. Speakers emphasized that a critical step the Trump administration needs to take, to prepare for a pandemic, is to set up a funding mechanism to pay for pandemic response.

Dr. Anthony Fauci, the director of the National Institute of Allergy and Infectious Diseases (NIAID) since 1984, emphasized his experience in dealing with five presidents:

“If there’s one message that I want to leave with you today based on my experience, it is that there is no question that there will be a challenge to the coming administration in the arena of infectious diseases. “There will be a surprise outbreak during the [Trump] administration’s first term…We need a public health emergency fund…”

“If you think about all the things that could very quickly devastate a population, devastate a country, pandemics is really near if not at the top of that list.”

Other speakers agreed: “a pandemic is inevitable… the incoming Trump administration [should] take steps towards improving pandemic preparedness… something will happen at an unexpected point… The threat of a pandemic is very real….there are also a lot of very exciting avenues to improve our approaches and to explore new initiatives.”

In June 2017, the World Bank launched pandemic bonds with $500 million to provide financial support to PEF which would distribute money to countries facing a major disease outbreak with pandemic potential. PEF has two financing windows: an insurance window with premiums consisting of bonds and swaps, funded by Japan and Germany; and a “cash” window.

This financing structure combines funding from the bonds issued with over-the-counter derivatives that transfer pandemic outbreak risk to derivative counterparties. The structure was designed to attract a wider, more diverse set of investors. The transaction was oversubscribed by 200% reflecting overwhelming “investor confidence”; that confidence lowered the total amount transferred to the market in bonds and derivatives to $425 million.

Clearly, there is a financial incentive to investing in pandemic risk. The global public-private partnerships wasted no time in preparing for the investment opportunities that the Covid-19 pandemic presents.

In 2017, the World Health Organization and the World Bank co-convened the Global Preparedness Monitoring Board (GPMB), which was formally launched in 2018. Three of the six GPMM Board members include Dr. Anthony Fauci; Dr. Chris Elias, president of the Global Development Program at the Bill & Melinda Gates Foundation; and Dr. George Fu Gao, the director-general at the Chinese Center for Disease Control and Prevention, who is a member of the Chinese Communist Party (CCP) — whose Unrestricted Warfare (1999)is regarded as China’s Master Plan to Destroy America. As reported by The Epoch Times (April 2020)

“A major key to Beijing’s “unrestricted warfare” strategy is its “Made in China 2025” initiative that was released in 2015 with plans to target 10 industries, including biopharmaceuticals. Experts warned that by 2020, China had already met its interim biopharmaceutical goal of supplying more than 90 percent of all U.S. antibiotics, vitamin C, ibuprofen, and hydrocortisone.

China intends by 2025 to be competing directly with its U.S. biopharmaceutical customers. It has formed 100 companies to produce patented biotech pharmaceutical “products certified under the World Health Organization.”

Serious security questions, therefore, arise about participation of Dr. Fauci, a high level US public health official who may have divulged classified information to the Chinese Communist representative during discussion on the WHO-GPMB board.  [Read: Dr. Fauci is No Nostradamus: How COID-19 Ran Amok Under His Watch, James Grundvig, July 3, 2020] 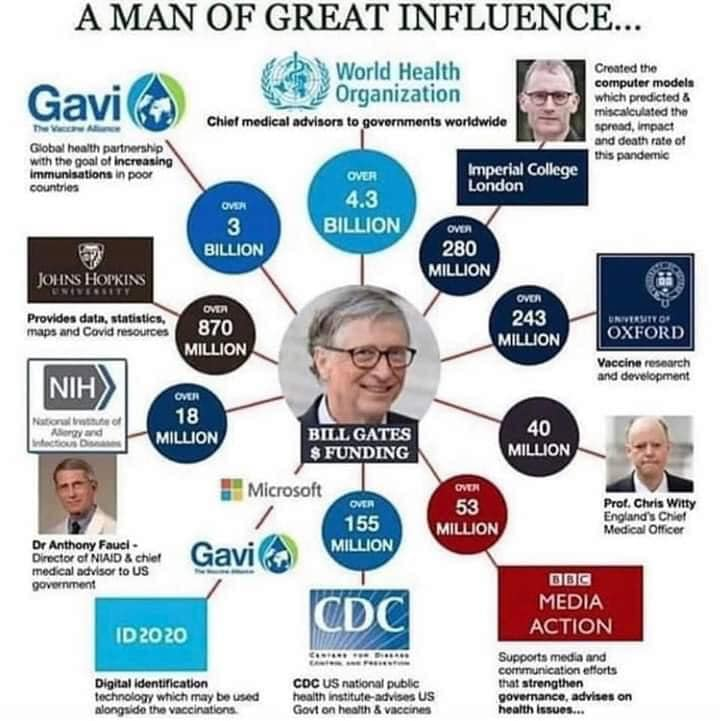 “The Bill & Melinda Gates Foundation’s fingerprints can be seen on every major global health initiative of the past two decades. And beyond the flashy, billion-dollar global partnerships, the Foundation is behind hundreds of smaller country and region-specific grants—$10 million to combat a locust infestation in East Africa, or $300 million to support agricultural research in Africa and Asia—that add up to billions of dollars in commitments.”

Over the years, the Gates Foundation has effectively privatized the World Health Organization; transforming it into a vehicle for corporate dominance. The Foundation has facilitated the dumping of toxic products onto the people of the Global South – Asia, Africa, and South America. GMO agriculture commitments and the intensive use of pesticides has damaged the environment and undermined the health of children; it has also destroyed small farmers’ livelihood.

As Dr. Baskut Tuncak, a scientist specializing in chemicals and their impact on people’s health, who is also a lawyer, founder of Common Rights, currently serves as the United Nations Special Rapporteur on the implications for human rights of environmentally sound management and disposal of hazardous substances and wastes. Dr. Tuncak pleaded for the precautionary principle in The Guardian, 2017:
“Will regulators continue to yield to this myth that pesticides are necessary to feed the world? Will they continue to rely on industry promoted science? Or will they protect human rights, especially the rights of the child, by invoking the precautionary principle, given the considerable uncertainty at stake?

”Our children are growing up exposed to a toxic cocktail of weed killers, insecticides, and fungicides. It’s on their food and in their water, and it’s even doused over their parks and playgrounds. […] Paediatricians have referred to childhood exposure to pesticides as creating a “silent pandemic” of disease and disability. Exposure in pregnancy and childhood is linked to birth defects, diabetes, and cancer. Because a child’s developing body is more sensitive to exposure than adults and takes in more of everything – relative to their size, children eat, breathe, and drink much more than adults – they are particularly vulnerable to these toxic chemicals.”

Those humanitarian concerns are of no concern to the Bill and Melinda Gates Foundation which effectively has taken control of public health globally and has derailed its focus from improving people’s health to improving its corporate donors’ PROFITS.

“The foundation’s influence over public health policy is practically contingent on ensuring that safety regulations and other government functions are weak enough to be circumvented. It therefore operates against the independence of nation states and as a vehicle for Western capital. [The Grayzone , July 8, 2020] 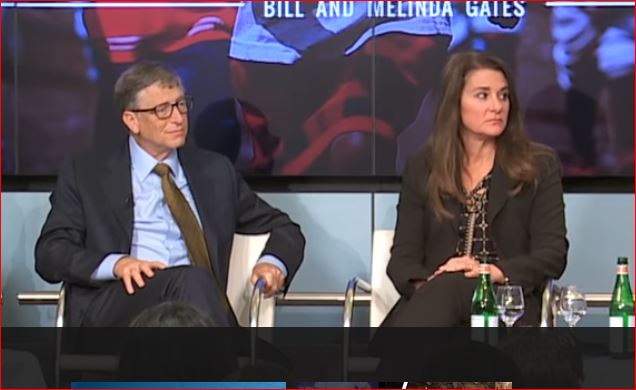 Bill Gates, in close collaboration with Tedros Adhanom head of the World Health Organization, and Dr. Anthony Fauci, head of the National Institute of Allergy and Infectious Diseases — both of who are recipients of Gates Foundation grants. Gates is the principal driving force behind the panic and government draconian lockdown policies. Those policies are not backed by evidence; they were concocted by faulty mathematical models that Bill Gates favors — not by evidence. What’s more the modelling predictions proved to be totally, utterly wrong.

Bill Gates and the Gates Foundation are accountable to no one — which is a serious consideration NOT to take his advice without independent validation.

Lack of accountability has led to disastrous policies during this coronavirus epidemic. Governors, who have been misled by Dr. Anthony Fauci’s false “second wave” warnings, are once again issuing lockdown orders. This policy is destroying people’s lives; it is undermining their relationships, their physical and mental health, and causing financial ruin. Yet, those who issue those policies do so with impunity – as if those life issues were trivial.

The latest accumulated evidence points to the wisdom of those who did not lockdown their country. Contrary to the criticism heaped on Sweden by the corporate media, the population of Sweden will soon to achieve natural herd immunity without having been subjected to any lockdown; without having closed its schools; and without crashing its economy.

The fact-based evidence reported by Mike Whitney posted on Zerohedge, is that Sweden’s population is 10,250,000. Of the 5,482 total deaths due to the virus, only 70 people under the age of 49 died in Sweden of Covid-19.

What possible justification led to the closings beaches? Official announcements in the US about the number of people infected and the number of people who died of COVID-19 are utterly unreliable. They are not to be trusted. The latest example, reported by Bloomberg News is that: “Florida changed its reported number of daily deaths from Covid-19 to 95 from 188 reported on Saturday.”

“It is time to seriously question everything we are told regarding the physical and the cultural virus.” –. W. Scott Magill, MD

Read Why the Bill Gates Global Health Empire Promises More Empire and Less Public Health, a detailed, documented expose of the ruthless modus operandi of Bill Gates and the Bill and Melinda Gates Foundation, by Jeremy Loffredo and Michele Greenstein, published by The Grayzone on July 8th. We post it with permission from The Grayzone.

[i] Bretton Woods Project. “What Are the Main Criticisms of the World Bank and IMF?” 2019; World Development Movement. “Treacherous Conditions: How IMF and World Bank Policies Tied to Debt Relief Are Undermining Development,”, 2003

[ii] Georgetown University’s center for Global Health Science and Security is funded by the US government – specifically the CDC, the NIH, the Department of State Biosecurity Engagement Program, the US Defense Threat Reduction Agency and the FBI. It is also a recipient of funds from the Bill and Melinda Gates Foundation. https://ghss.georgetown.edu/about/#

[iii]  The Harvard Global Institute was established in 2015 with financial support from the Dalian Wanda Group and its chairman Wang Jianlin. HGI funded research projects with particular relevance to China. Project activities coordinated with the Harvard Center Shanghai.