Bloomberg News reports that a new study from the Centers for Disease Control and Prevention, confirms an epidemic increase in developmental disorders among U.S. children–primarily, autism and ADHD. These disorders in children aged 3 to 17 increased from 12.8% in 1997-1999, to 15% in 2006-2008–affecting 1 in 6 children (about 10 million).

Autism, a lifelong disabling neurological developmental condition had the largest increase, rising nearly fourfold from  0.19% in 1997-1999, to 0.74 % of children in 2006-2008. The research is published in the journal Pediatrics.

Vaccines are legally defined as “unavoidably unsafe”–which is why manufacturers have been given immunity from liability. The role of vaccines in the epidemic rise in autism is one of the most contentious medical issues which pits millions of parents whose children developed autism spectrum after being vaccinated, against a powerful vaccine establishment whose financial interests preclude an honest appraisal of vaccine safety.

The unexplained accelerated increase in autism spectrum that has reached epidemic levels has been documented in state and federal studies. In 1999, the California Dept. of Developmental Services documented a 210% increase in children with autism between 1987 and 1998: 3,864 compared with 11, 995.

Concerns about the safety of vaccines and the way vaccines singly or in combination act on the developing immune and neurological system, and the role that viral and bacterial infections, environmental toxins, and genetics can play in the development of vaccine-associated autism and other learning, behavior, and autoimmune disorders, needs to be  rigorously examined, rather than denied by those whose careers and financial interests are linked to the dogma that vaccines are “safe.”

On April 11, 2011, Dr. Poul Thorsen, the Danish vaccine researcher (a psychiatrist by training) was one of the key researchers who has been closely aligned with and funded by the Center for Disease Control (CDC), was indicted by a federal grand jury on 13 counts of wire fraud;  9 counts of money laundering; and for allegedly stealing over $1 million from CDC funded autism research between 2004 and 2008.  US prosecutors are seeking to extradite him from Denmark.  See the indictment.

Dr. Thorsen’s research on autism is widely known in academic circles, where he was a highly respected figure. His extensively quoted paper, known as “The Danish Study,”, is the cornerstone for the claim that the autism-vaccine connection has been refuted.

He has been charged with stealing the money over a four-year period, while serving as the “principal investigator” under a CDC grant, for a program that studied the relationship between autism and exposure to vaccines.  He is alleged to have submitted a dozen false invoices for research expenses, using the proceeds to buy a home in Atlanta, two cars and a Harley Davidson.    Prosecutors seek Dr. Thorsen’s extradition from Denmark.

The case was first reported by Robert Kennedy Jr. In March,2010, in The Huffington Post.   Of note, in sharp contrast to the media frenzy about the debarment of Dr. Andrew Wakefield, the major news media have been silent about the criminal indictment of Dr. Thorsen.

When a researcher is indicted on criminal charges–for fraud, falsifying documents, and theft–the integrity of his published research oeuvre is ipso facto under a cloud of suspicion. Thus, an audit of Dr. Thorsen’s research data by an independent panel of scientists is called for.

The second most influential vaccine promoter is Dr. Paul Offit, Chief of Infectious Diseases at Children’s Hospital of Philadelphia, who is a co-patent holder in Merck’s RotaTeq (rotavirus) vaccine–whose royalties earn him millions of dollars; his salary as professor of Pediatrics at the University of Pennsylvania is endowed by Merck. Dr. Offit has served on both Merck’s advisory board and the federal Advisory Committee on Immunization Practices. 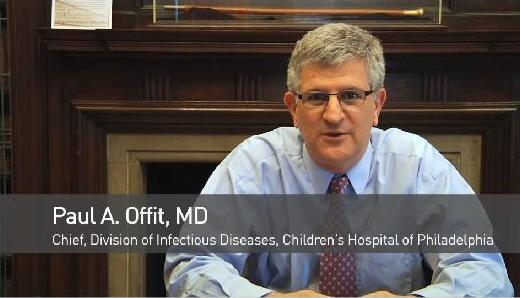 Dr. Offit’s financial interest in promoting vaccines as safe constitutes an obvious conflict of interests: it raises serious concerns about his credibility as an impartial scientist.  His exaggerated claims about the safety of vaccines are over the top–resorting to promotional marketing hype that would likely not pass FDA rules.

A CBS News report by investigative Correspondent, Sharyl Attkisson, “How Independent Are Vaccine Defenders? ” (aired on July 25, 2008) in which she examined the financial ties between vaccine supporters and the vaccine industry, noting that Dr. Offit has refused to divulge his financial remuneration from the vaccine industry. Even so, the rest of the media always seek him out as a reliable “expert” which means they trust his opinions.

Dr. Offit’s dismissive responses to the concerns raised by parents of vaccine-injured children has been callous–as someone clinging to a dogma.  Surely Dr. Offit knows that vaccines are legally classified as “unavoidably unsafe.”  How can a doctor ignore entirely the mounting number of vaccine injury court settlements ? The government has settled and compensated more than 2,500 families of vaccine-injured children–including 83 with autism–and paid more than $2 billion in vaccine settlements.

For a scientist to ignore the human casualties because they contradict his strongly held position that vaccines cannot  be blamed for causing harm,  is a sign of bias, and closed mindedness–not attributes of an honest scientist.

On August 4, 2008, the California Orange County Register, published Dr. Offit’s response to the CBS report in which he listed financial disclosure documents that he emphatically claimed he had provided to CBS. He accused Sharyl Attkisson of lying. “Did (reporter Sharyl Attkisson) lie about whether or not we provided materials? Of course,” said Paul Offit.

Dr. Offit has repeatedly resorted to the inflammatory tactic of hurling false and slanderous accusations about his critics when they report that he has undisclosed financial interests in the business of vaccines, which most people would agree, constitute a conflict of interest. His irresponsible false accusations are aimed at assassinating  journalists’ professional reputation. Unfortunately, the OC Register failed check the veracity of Dr. Offit’s slanderous accusation.

“An Orange County Register article dated Aug. 4, 2008 entitled “Dr. Paul Offit Responds” contained several disparaging statements that Dr. Offit of Children’s Hospital of Philadelphia made about CBS News Investigative Correspondent Sharyl Attkisson and her report. Upon further review, it appears that a number of Dr. Offit’s statements, as quoted in the OC Register article, were unsubstantiated and/or false. Attkisson had previously reported on the vaccine industry ties of Dr. Offit and others in a CBS Evening News report “How Independent Are Vaccine Defenders?” July 25, 2008.

Unsubstantiated statements include: Offit’s claim that Attkisson “lied”; and Offit’s claim that CBS News sent a “mean spirited and vituperative” email “over the signature of Sharyl Attkisson” stating “You’re clearly hiding something.” In fact, the OC Register has no evidence to support those claims.
Further, Offit told the OC Register that he provided CBS News “the details of his relationship, and Children’s Hospital of Philadelphia’s relationship, with pharmaceutical company Merck.” However, documents provided by CBS News indicate Offit did not disclose his financial relationships with Merck, including a $1.5 million Hilleman chair he sits in that is co-sponsored by Merck.
According to the CBS News’ documentation recently reviewed by the OC Register, the network requested (but Offit did not disclose) the entire profile of his professional financial relationships with pharmaceutical companies including: The amount of compensation he’d received from which companies in speaking fees; and pharmaceutical consulting relationships and fees.
The CBS News documentation indicates Offit also did not disclose his share of past and future royalties for the Merck vaccine he co-invented. To the extent that unsubstantiated and/or false claims appeared in the OC Register and have been repeated by other organizations and individuals, the OC Register wishes to express this clarification for their reference and for the record.”

If the two most “authoritative” vaccine “experts” who have had the greatest influence in CDC vaccination policy, are found to be dishonest, then the integrity of their claims about vaccine safety cannot be entirely trusted. Whether some children are put at high risk of neurological,  developmental damage from vaccines, must be re-examined by honest scientists who have no financial interest or ties to vaccine manufacturers.

The key to understanding, preventing and curing infectious diseases as well as conditions that might be related to vaccinations, such as autism, lies in having unbiased scientists design, conduct and publish appropriate research.  Until CDC and other federal granting agencies stop cherry-picking the vaccine science and scientists they will support, based on their willingness to generate preordained conclusions, we will continue to wait for better vaccines and for effective strategies to treat affected patients.