“Should the U.S. government use tax dollars to fund scientists fusing human stem cells into early animal embryos in order to create “chimeras” that are part human and part pig? Or part mouse?

The U.S. National Institutes of Health says the answer is yes. The agency announced Thursday that it plans to lift a moratorium that since last year has blocked taxpayers’ money from flowing to this type of hot-button research.” (NIH Plans to Lift Funding Ban on Human-Animal Hybrids by Antonio Regalado, MIT Technology Review, August 4, 2016)

The mixing of human and animal DNA in modern medicine is called chimera. The name is taken from the Greek mythological monster creature depicted as part lion, part goat, and part snake.

Beware the month of August – when Congress and many citizens are vacationing! Government bureaucrats favor August to issue announcements about radical medical research policy changes, for which taxpayer money is sought. They do so, to avoid public controversy about public funding of radical inter-species experimentation that may have serious unintended, but potential adverse consequences undermining the very integrity of human beings.

There are major ethical hurdles that have not been carefully examined, much less resolved. Human stem cells are being thrown into animal embryos with the hope that the the stem cells reach the target of the experiment. However, the moral concern derives from the very real possibility that human stem cells will land in the animal’s brain rather than a kidney. This could result in animals acquiring human mental cognition. The possibility is real: even Juan Carlos Izpisua Belmonte, a scientist at the Salk Institute in California, acknowledged, “anything is possible.”

“We need to consider all the possibilities. Where the cells go is a major question. They can go to the brain or anywhere,” he said. (CNN, June 9, 2016)

“First, NIH is establishing an internal NIH steering committee to provide programmatic input to NIH Institute and Center Directors in making funding decisions for two areas of research in which:

NIH is seeking public comment on the proposed scope of the chimera research to be considered by the NIH steering committee. The committee will focus on the experimental design and likely nature of the chimeric animal model.”

“The issue was clearly a delicate one for the NIH, which was caught between advancing science and a possible political bombshell that could lead to public backlash. The agency said it would form a special committee to oversee funding of these human-animal mixtures—a move that could raise questions over political interference in science.” (MIT Technology Review, August 4, 2016)

The 2009 NIH Guidelines for Human Stem Cell Research specifically prohibit introducing human pluripotent cells into nonhuman primate blastocysts and the breeding of animals into which human pluripotent cells may have contributed to the germ line (egg or sperm cells). A report in MIT Technology Review in January, 2016, indicated that such experiments were already under way in the U.S. For example, at the Salk Institute and at Stanford University.

The chart below was published by SCIENCE, 2015 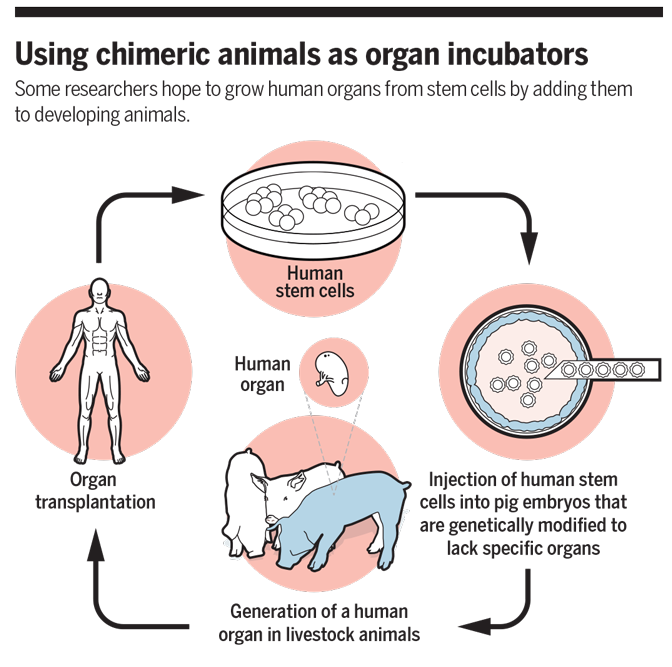 However, the technology is highly controversial. As David Resnik, NIH bioethicist stated,

“The worry is that the animals might turn out to be a little too human for comfort, say ending up with human reproductive cells, patches of people hair, or just higher intelligence.  The specter of an intelligent mouse stuck in a laboratory somewhere screaming ‘I want to get out’ would be very troubling to people.” (Human-Animal Chimeras Are Gestating on U.S. Research Farms by Antonio Regalado, Science, Jan. 6, 2016)

These experiments are moving forward without clarifying moral and legal issues that will arise. For example, would a human-animal chimera have human rights? If a chimera was created and developed into a mostly human creature, would it still be owned by a laboratory?

“Based on interviews with three teams, two in California and one in Minnesota, MIT Technology Review estimates that about 20 pregnancies of pig-human or sheep-human chimeras have been established during the last 12 months in the U.S., though so far no scientific paper describing the work has been published, and none of the animals were brought to term.” (Science, Jan. 6, 2016)

Hiromitsu Nakauchi, a stem-cell biologist at Stanford University who, as a matter of convenience, most of the iPS cells being injected into animal embryos are made from his own blood, because recruiting volunteers involves too much paperwork.  He acknowledged:

“My view is that the contribution of human cells is going to be minimal, maybe 3 percent, maybe 5 percent. But what if they contributed to 100 percent of the brain?

What if the embryo that develops is mostly human? It’s something that we don’t expect, but no one has done this experiment, so we can’t rule it out.” (Science, January. 2016)

A possible political bombshell that could lead to public backlash. NIH officials said they would form “a special committee” to oversee funding of these human-animal mixtures. Given that  NIH advisory committees have been shown to be rigged by those with a vested interest, there is much to be concerned about.

Wesley J. Smith, a senior fellow at the Discovery Institute’s Center on Human Exceptionalism, expressed doubt about whether the scientific community or general public has the willpower to impose ethical boundaries on this sort of research.

“I don’t think this work can be stopped,” Mr. Smith wrote. “But identifying the lines that should not — and which we will not allow — to be crossed is urgently needed so that legally enforceable standards can be delineated.”

However, “I just don’t see anyone currently in power within the symbiotically connected science, government, and big business sectors much interested in giving such work more than placating lip service at the moment.”  (The Washington Times, August 4, 2015)

Should the U.S. government use tax dollars to fund scientists fusing human stem cells into early animal embryos in order to create “chimeras” that are part human and part pig? Or part mouse?

The U.S. National Institutes of Health says the answer is yes. The agency announced Thursday that it plans to lift a moratorium that since last year has blocked taxpayers’ money from flowing to this type of hot-button research.

At the same time, the agency is proposing stricter controls on certain experiments most likely to lead to monkey-men or other bad science fiction.

Last September, the NIH surprised the scientific community by slapping a broad moratorium on funding of any research in which human stem cells are injected into animal embryos. By then, the agency knew what MIT Technology Review reported exclusively in January, which is that such experiments were already under way in the U.S., with several dozen sows and sheep carrying fetuses potentially containing a mix of human cells.

At the time, none of the animals had been brought to term, out of scientific caution. Scientists carrying out that work at the Salk Institute and at Stanford University say the fetal animals would only contain, at the most, a small proportion of human cells.

However, Rudolf Jaenisch, a biologist at MIT, says that to his knowledge, none of these experiments have worked. That is, no human cells actually survived to contribute to the animals’ bodies. “I don’t think these chimeras have worked at all at this point,” he said. “But it’s a very important experiment.”

Human-animal mixtures aren’t new. Wolinetz noted in a statement that biomedical researchers “have created and used animal models containing human cells for decades” to gain insights into biology and disease. Scientists often grow human tumors inside of mice, for example.

But the new research is different, because potent human stem cells are being injected directly into a very early-stage animal embryo, consisting of just a couple of dozen cells. Theoretically, the human cells could then end up contributing to any part of the animal, and in any amount.

“There is definitely interest in the scientific community to pursue these studies,” says Arun Sharma, a researcher at Stanford University. “In my opinion, the NIH is doing the right thing in thoroughly evaluating the scientific and bioethical implications of this work before pushing forward.”

What’s the point of such experiments? One is that it might be possible to create an otherwise normal pig whose entire heart—or whole liver—is made from human cells. That would create a new way to farm human organs for transplant.

“What is new is as the science has progressed, as we have seen advances in stem-cell technology and gene-editing capabilities, we’ve begun to creep a little bit closer to the science leading to some of these ethical concerns,” says Wolinetz.

The issue was clearly a delicate one for the NIH, which was caught between advancing science and a possible political bombshell that could lead to public backlash. The agency said it would form a special committee to oversee funding of these human-animal mixtures—a move that could raise questions over political interference in science.

But the agency also tried to firm up restrictions on the scariest possibilities. It said it wants to expand an existing regulation that forbids funding any research combining human cells with early embryos of apes or monkeys. The species are just too close, and the results too disturbing to contemplate.

The agency also wants to explicitly bar any of these human-animal chimeras from being allowed to reproduce. The risk—very remote but which could have disastrous consequences for public confidence in science—is if two chimeras mated and gave rise to a human fetus. That could happen if their sperm or egg were human. (Read more: “Human Animal Chimeras Are Gestating on U.S. Research Farms” MIT Technology Review, Jan. 2016)