This is a developing news story focusing on the corruption of industry-initiated government vaccination policies. The case involves Sanofi and the launching of its Dengvaxia vaccine in a massive school-based Dengvaxia vaccination campaign in 830,000 Philippino school children.

The New York Times has just published its report,

noting that: “public health experts are worried that the distrust could spill over to other vaccination programs.”

“The illness, also called breakbone fever, can be excruciating, with high fevers, headaches, muscle and joint pains and lingering weakness. Sometimes the disease causes hemorrhage or shock, which can be fatal…

Research has found that severe illness can occur in people who had one [of four dengue viruses] and later became infected by another. The body’s immune response to the first  virus is thought to make the second illness worse.”

But Sanofi failed to examine the reason that young children aged 2 to 5 were at increased risk of severe dengue infection; the company encouraged the Philippine government to initiate a massive, school-based Dengvaxia vaccination program. One year after 830,000 children in the Philippines were vaccinated, and a major scandal erupted in the Philippines, the World Health Organization changed its initial equivocating recommendation (by the same Global Advisory Committee on Vaccine Safety) regarding Sanofi’s dengue vaccine, Dengvaxia:

“Dengvaxia prevents disease in the majority of vaccine recipients but it should not be administered to people who have not previously been infected with dengue virus.”

“Overall efficacy against any symptomatic dengue disease was 60.8 percent* in children and adolescents 9-16 years old who received three doses of the vaccine. Analyses show a 95.5 percent* protection against severe dengue and an 80.3 percent* reduction in the risk of hospitalization during the study.

Sanofi’s report of the Asian Dengvaxia trial was published in the journal Vaccine [2] (2015) also stressed the positive:

the development of a dengue vaccine, similar to other recent vaccine successes against human papillomavirus and pneumococcal disease, requires a long standing and continuous effort from private and public organizations. In this regard, we have in the past 22 years benefited from multiple external collaborations across five continents.”

However, an increased risk of dengue infection was noted:

“risk of hospitalization for virologically confirmed dengue in the vaccine group as compared with the control group…the risk was observed in younger children, particularly the youngest age group, 2-5 years.”

Dr. Halstead wrote to the WHO urging that they proceed cautiously when rolling out the dengue vaccine. He had warned about the unique problems posed by a dengue vaccine, specifically re-exposure to dengue virus increases the risk of a potentially lethal complication when a person is infected a second time; it can result in hemorrhagic fever or dengue shock syndrome – which can lead to organ failure and death. The process is known as antibody-dependent enhancement or ADE. In an interview with Reuters, he stated: “It was not obvious to Sanofi and the World Health Organization, but it was obvious to me.”2

Indeed, the WHO issued an equivocating position paper in July 2016:

“The findings [of increased risk] in children aged 2–5 years are unlikely to be due to chance. In the younger age groups, the vaccine may act as a silent natural infection that primes seronegative vaccines to experience a secondary-like infection upon their first exposure to dengue virus. Vaccination may be ineffective or may, theoretically, even increase the future risk of severe dengue illness in those who are seronegative at the time of first vaccination regardless of age.

If this is the case, even in high transmission settings there may be[an] increased risk among seronegative persons despite a reduction in dengue illness at the population level.”

Given that few (if any) of the countries involved have sophisticated screening programs in place to measure seroprevalence, the WHO recommendation is  irrelevant:  “The vaccine is not recommended when seroprevalence is below 50% in the age group targeted for vaccination.”

The following statement in the same WHO document – within the context of an acknowledgment of the severe risk posed by CYD-TDV vaccine – is mind-boggling:

“Co-administration studies previously conducted in children outside the indicated age range, in which CYD-TDV was co-administered with YF vaccine, DTaP-IPV/Hib, and MMR, did not identify any safety concerns (data were comparable when vaccines were co-administered or given alone), and that the immunogenicity profiles were satisfactory both for CYD-TDV and for co-administered vaccines… Clinical trials are planned to assess safety and immunogenicity with human papillomavirus (HPV) and tetanus toxoid and reduced-dose diphtheria (TdaP) vaccines in endemic settings.”

The Philippines government under the Benigno Aquino regime initiated a massive school-based Dengvaxia vaccination drive in January 2016, subjecting more than 830,000 children to the severe risks posed by the vaccine. Sanofi and the former Philippines’ Secretary of Health, Janette Garin ignored scientists who warned about the potentially deadly risk. More than likely, company executives had their eyes fixed on the potential $1 billion annual sales of Dengvaxia.[7] Sanofi launched the vaccine in 11 countries in 2016.

Several investigations are underway, including a criminal probe, to determine whether Philippine officials who launched this devastating vaccination drive were corrupt. GMA News reported that Susan Mercado, a former undersecretary of the Department of Health stated that the government’s purchase of Dengvaxia for 3.5 billion pesos ($69 million) had not gone through the required approval process:

“the P3.5-billion Dengvaxia deal and the actual administration of the vaccine during the administration of President Benigno Aquino III was a scam because it did not go through the required government processes.” (Dec. 6, 2017)

Dr. Garin claimed that the Health Department was unaware that Sanofi withheld information about the vaccine prior to the approval of the 3.4 billion pesos deal. She defended the vaccination campaign, stating “it was an institutional decision to address a public need.” The actual purchase, she said, was made by Philippine Children’s Medical Center (PCMC) after consultation with “medical experts and medical professionals about the vaccine.”

Reuters reports [8] that its review of internal DOH documents show that Garin disregarded expert scientists concerns about the possibility of causing harm; and she ignored the concerns of a panel of doctors and pharmacologists about the lack of scientific evidence of the vaccine’s long-term safety, that she ignored the stringent recommendations of the Formulary Executive Council (FEC) when she began the massive vaccination drive. The documents show that she ignored the FEC letter expressing concern: “Based on the available scientific evidence presented to the Council, there is still a need to establish long-term safety, effectiveness and cost-effectiveness.” 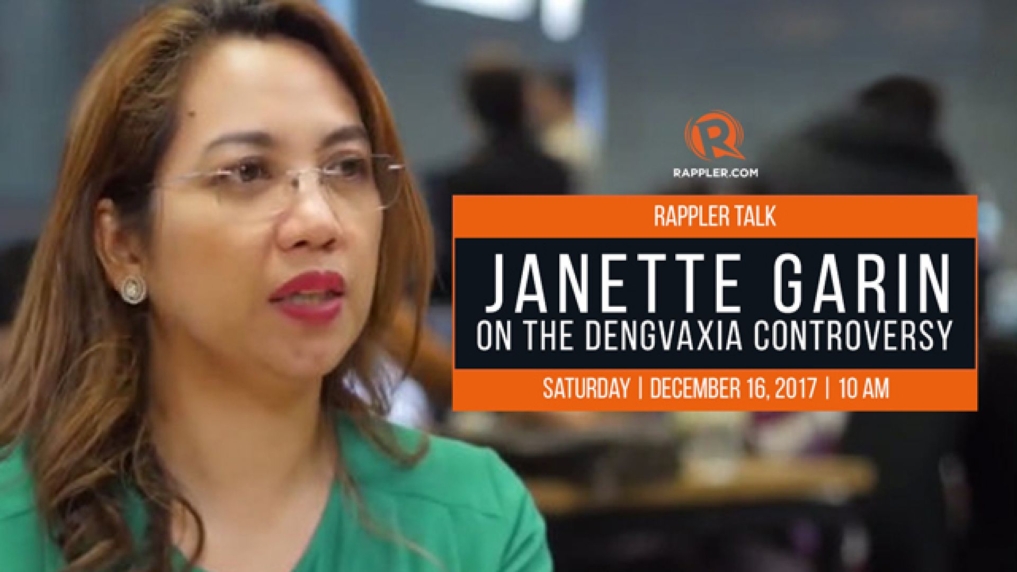 The FEC recommended in its meeting and in a letter, that Dengvaxia should be introduced through small-scale pilot tests and phased implementation rather than across three regions in the country at the same time, “and only after a detailed “baseline” study of the prevalence and strains of dengue in the targeted area. The experts also recommended that Dengvaxia [should] be bought in small batches so the price could be negotiated down.” Furthermore, a DOH-commissioned economic evaluation report found the proposed price “not cost-effective”.

Independent Data Re-analysis Refutes Sanofi Safety Claims
Soon after Dengvaxia was licensed in six countries, a re-analysis of Sanofi’s clinical trial data by independent scientists from the Imperial College (London), Johns Hopkins Bloomberg School of Public Health, and the University of Florida, was published in Science Magazine (2016)[9]. They reported that the vaccine’s effectiveness depends on the local epidemiology; its effect depends on how intense the local transmission of dengue is:

Another report in Science Magazine (2017), by a team of scientists at the University of California, Berkeley led by Professor Eva Harris analyzed more than 41,000 blood samples using different statistical approaches in search of a pattern that would explain why some children develop the severe form of the disease: “all roads led to Rome.” They report that all three methods identified a specific titer antibody that is predictive of severe disease. Children, whose antibodies from a previous infection fell to a certain low point, were eight times at higher risk of the deadly dengue infection.[10]

On November 29, 2017, Sanofi acknowledged that Dengvaxia increased the risk of severe dengue in children who were vaccinated:

“For those not previously infected by dengue virus, the analysis found that in the longer term, more cases of severe disease could occur following vaccination upon a subsequent dengue infection.”

By the time that Sanofi made that acknowledgment more than one million children – 830,000 in the Philippines and 300,000 in Brazil—had been exposed to the increased serious risk posed by the vaccine. That mass vaccination initiative was premature and a huge mistake, acknowledges Professor Neil Ferguson, an unpaid adviser to both Sanofi and the WHO: “The development process around the first dengue vaccine led to a degree of momentum and judgments that we should learn lessons from.”

Only after the Sanofi acknowledgment, in 2017, the WHO issued the following revised statement: “Following a consultation of the Global Advisory Committee on Vaccine Safety, CYD-TDV (Dengvaxia) should not be administered to people who have not previously been infected with dengue virus.”

Volunteers Against Crime and Corruption in the Philippines received at least three deaths reports of children vaccinated with Dengvaxia; VACC requested the Justice Department to investigate the dengue vaccine deal.

On Dec. 5, 2017, the Philippine Daily Inquirer reported that Senator Dick Gordon, chair of the Senate blue ribbon committee, said that former President Aquino and former Health Secretary Garin could be held criminally liable for implementing a dengue immunization program that had been halted over safety concerns.

The Manilla Bulletin, reported on December 13, 2017, that Thomas Triomphe, Sanofi Pasteur Vice-President for Asia and Pacific, “apologized for his company’s issuance of a global advisory warning the public of the ill-effects of the vaccine if administered to persons who have not yet been infected with the deadly mosquito-borne virus”.

He then played linguistic calisthenics by claiming that “severe dengue” doesn’t mean severe illness…the terminology, he claimed, is “medical language” for “fever and bleeding gums”…

Representative Rodante Marcoleta rebuked Sanofi: “You are very indifferent, [the] damage has already been done. You act as if you can casually play with the lives of the Filipino people, how can you be so inconsiderate”.

These insufferable maneuvers are clearly aimed at damage control in preparation for the looming Dengvaxia lawsuits.

[8] Garin ‘Ignored’ Experts’ Advice On Dengvaxia; No Testing Done To Find Out If Children Had Dengue Before Vaccination, By Tom Allard, Karen Lema, Reuters, Dec. 11, 2017