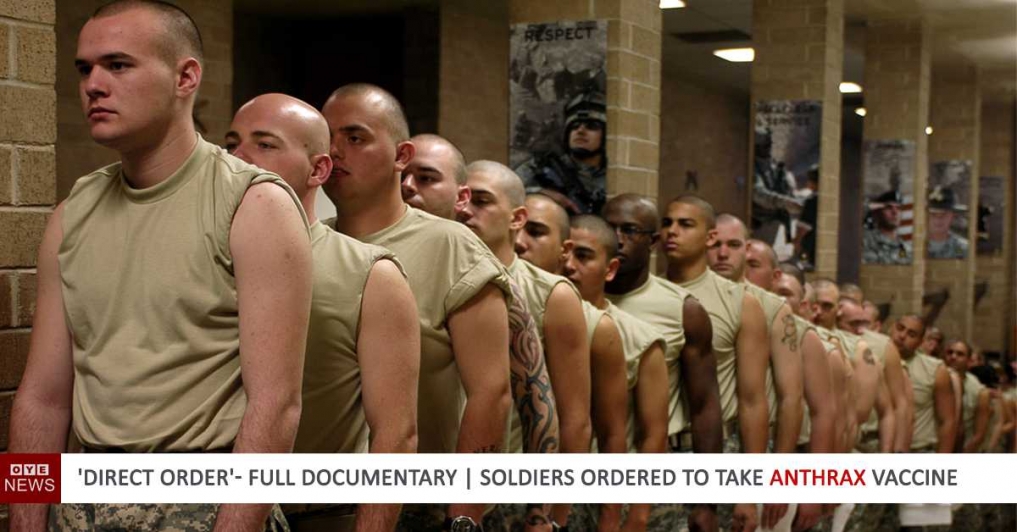 “Direct Order”: An award-winning documentary (first released in 2003; updated and posted on YouTube in 2013) focuses on U.S. military personnel who were ordered to take the controversial anthrax vaccine against their will, who suffered life-changing adverse health effects as a result. The biotechnology company, Bioport, which had purchased the anthrax vaccine manufacturing facility from the state of Michigan, was awarded a $13.6 million in the first of a series of continuing federal contracts for the purchase of the anthrax vaccine. The company was renamed Emergent Biosolutions and was given the green light to test its experimental anthrax vaccine BioThrax, on U.S. soldiers without their informed consent. This mandatory covert government sponsored medical experiment, conducted on US. soldiers was approved by federal regulators in 1998, during President Bill Clinton’s administration.

Anthrax vaccine safety and effectiveness — a contentious unresolved controversy
A number of published studies have linked anthrax vaccination to the development of Gulf War Syndrome; including a study in the most prestigious British medical journal The Lancet, and an analysis by Meryl Nass, MD in the American Journal of Public Health (2002). The government dictated military anthrax vaccine policy has never been justified — just as Saddam Hussein’s weapons of mass destruction never materialized.

Hundreds of soldiers — including seasoned pilots — refused the anthrax vaccine shots after evidence emerged that the vaccinations are connected to a variety of debilitating illnesses. A survey conducted by the GAO found that 77% of U.S. pilots and aircrew who were injected with the anthrax vaccine stated they would not have agreed to be vaccinated if they had been given a choice. (General Accounting Office Report. 2002) Despite the evidence, the US government refuses to acknowledge vaccine-related damage. 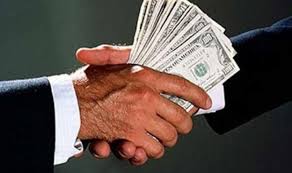 Although the vaccine has never been proven effective in humans, Emergent Biosolutions (EBS) has been awarded numerous multi-million U.S. government contracts for its anthrax vaccine. (Read more here and here) The vaccine is the company’s biggest revenue generator. Indeed, in December 2016, The Baltimore Sun reported that the Centers for Disease Control and Prevention (CDC) signed a billion dollar contract ($911 million to be exact) with the company for a supply of 29 million doses of its BioThrax anthrax vaccine. Additionally, Biomedical Advanced Research and Development Authority (BARDA, a division of the Department of Health and Human Services) ordered another $1.6 billion worth of NuThrax, “Emergent’s new generation anthrax vaccine candidate.”

“Taken together, the company believes that the CDC and BARDA contract actions reflect the government’s intention to transition the stockpile of anthrax vaccines from BioThrax to NuThrax beginning in 2019.

“Emergent believes these actions reflect the U.S. government’s continued assessment of anthrax as a high-priority threat and its firm commitment to protect the nation against bioterrorism,” said Daniel J. Abdun-Nabi, president and chief executive officer of Emergent BioSolutions. “We are pleased to be able to make meaningful contributions to helping the government execute its strategy to achieve its preparedness goals.” (Street Insider, Dec. 2016)

Question: What is the rationale for CDC’s expenditure of $911 million for BioThrax, EBS’ older version of the anthrax vaccine, when another government agency, BARDA is purchasing the company’s newer version of the vaccine?

News of these two multi-billion dollar Emergent Biosolutions government contracts resulted in windfall profits for EBS investors — including its executives and board of directors. The Baltimore Sun reported that the company’s stock shot up nearly 19% in one day!! (Read Insider Trading: MarketWatch; Insider Monitor)

Anthrax vaccine experiment on Israeli soldiers
In 2014, a court battle ended with a settlement agreement approved by an Israeli court. Every soldier who had filed a claim received $10,000; while soldiers who didn’t file a claim, but had been subjected to the unethical experiment without informed consent received $7,000.

“Under the terms of the compromise deal reached, the state admitted that during the experiment there were isolated cases of soldiers stricken by side effects from the vaccine. Some soldiers developed Crohn’s, thyroiditis, skin inflammation and partial kidney failure.”

In Israel, the anthrax experiment still resonates as a public scandal

“Ten years after it ended, most of the details of a secret trial that tested anthrax vaccines on Israeli soldiers remain unknown. Who was really behind the experiments, and were they even needed at all?” (“Why Did the Israeli Army Conduct Anthrax Experiments on its Soldiers?”+972 Magazine, Dec. 16, 2016) 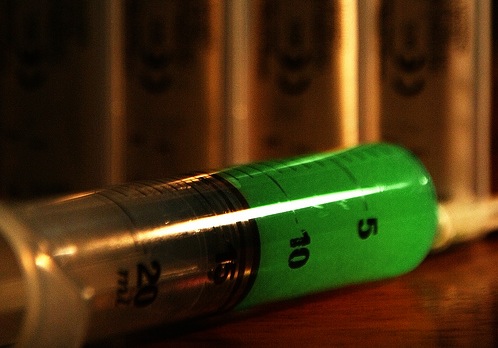 A central story line of an Israeli TV show that became a cult hit in Israel was an army medical center in which soldiers were being exploited as human guinea pigs in experimental drug and vaccine trials to test their effectiveness against a biochemical attack.

The show “Taagad” reawakened one of the most serious breaches of medical ethics in the Israeli military. A secret experimental anthrax vaccine trial in 2007, involving some 760 army recruits over an eight year period.

“Crucial information was hidden from the soldiers during the recruitment process; they were forbidden from informing their unit doctor about their participation, and most of them didn’t even tell their parents. All this, along with the exploitation of troops that occurs within a hierarchy, completely undermined the informed consent given by the soldiers. The process was so tainted by defects that it’s doubtful whether the soldiers’ signatures can even be considered as agreement.”

When the experimental nature of the vaccine was originally disclosed in May 2007, Physicians for Human Rights began interviewing soldiers who had participated in the trial. Several soldiers reported side effects such as skin problems, intestinal and digestive issues, migraines and headaches, tiredness and weakness.

“The trial in the series was instigated by external elements, and it wasn’t clear whether the army knew what was being tested. A pharmaceutical company seemed to be collaborating with people in the army or the Ministry of Defense, for the benefit of Russian entities. The company recruited a doctor who had agreed to cooperate for financial gain, and exploited combat soldiers, who due to their patriotism didn’t ask questions. The soldiers were prepared to swallow the “stimulants” being given to them without raising an eyebrow, even when some of them started developing a rash, hallucinations, psychotic behavior and vomiting. The resemblance to reality was not accidental.”

The soldiers demanded that they be officially recognized as disabled veterans and receive compensation accordingly. The Israel Defense Ministry responded to pressure from the families of the soldiers as well as public opinion. The case was adjudicated by the Israeli High Court of Justice in January 2014; the soldiers involved were compensated by the government.

However, the affair was swept under the rug, without anyone responsible being held accountable. Ran Goldstein, the Executive Director of Physicians for Human Rights, poses the following questions about the experiment and its authorization that remain unanswered after all these years:

The Israeli government will pay out thousands of dollars in compensation to 716 soldiers who took part in an anthrax vaccine trial that ended in 2005. 92 of the servicemen sued the state, saying they were forced into the study and suffered side effects.

“After seven years of long, difficult struggle, we won. We set out to combat the Israeli Defense Force’s (IDF) moral image as a Jewish army; we were not seeking reparations,” said a statement from the Victims of Anthrax Experimentation committee.

“What we fought for is an IDF that does not experiment on human beings, its soldiers, as if they are lower than lab animals, and then evades responsibility for the consequences. We’ve returned honor to the IDF command, but it’s a shame we had to do so through the courts.”

The Omer-2 trial, estimated to have cost 200 million dollars, ran between 1999 and 2005, and was funded largely by US forces, which reportedly struggled to obtain permission to conduct similar studies at home. 716 purported volunteers from the Israeli Defense Force were administered an existing American, or a modified Israeli vaccine against the deadly anthrax bacterium, which the authorities believed could be unleashed in a terrorist attack.

92 of the participants later complained that they were pressured into joining the experiment, and not adequately informed about the potential risks by doctors, who merely assured them that they would not go on to develop the disease. The impropriety of the recruitment methods was confirmed by an official investigation in 2008. The soldiers say they have been afflicted with Crohn’s disease, epilepsy, thyroid inflammation, pneumonia, allergic dermatitis and kidney failure as a result of the injections.

The government has not, however, accepted legal responsibility for the subjects’ health problems, though the final statement admits that there are “undeniable correlations” between the experiment and the health problems suffered by the soldiers.

It also says it acted in good faith. A government statement said that administering scientists “did not expect any dangerous side effects,” and that “the vaccine used in the research contains materials that exist in many vaccines given to babies on a regular basis, such as for tetanus and hepatitis.”

Authorities have defended the experiment on the whole, which has resulted in the introduction of an indigenous vaccine against the bacterium, which attacks the lungs, gastrointestinal tract and skin of an infected patient and has strains that result in a 75 percent death rate.

“A decade and a half ago, the defense establishment discerned that Israel faced a grave threat in the form of anthrax. Israeli development of an inoculation against this threat was, and still is, a source of national pride, and an example of Israel’s ability to deal with threats,” said attorney, Baruch Brizel, who represented the Defense Ministry during hearings at the Petah Tikva district court.

Endonuclease Fingerprint Indicates a Synthetic Origin of SARS-CoV-2  SARS-CoV-2 is the virus that caused the disease COVID-19.   END_OF_DOCUMENT_TOKEN_TO_BE_REPLACED