In his new book, America’s Bitter Pill  (2015) Steven Brill explains why the Affordable Care Act (Obamacare) won’t work. Brill’s damning indictment is based on the fact that this market driven system, with all its profiteering and run away costs in place, will fail utterly to contain healthcare costs. He conducted in-depth interviews with more than 240 people involved in various aspect of healthcare who provided an inside look at how Obamacare was written, passed, implemented and changed over the last fiver years.

Brill’s own personal experience with open-heart surgery for an aortic aneurysm, was the catalyst for the book. After an eight-day hospitalization, his medical bills came to $197,000. Sometime later, even the president and CEO of UnitedHealth Group, Brill’s health insurance company, could not explain the medical bills and explanation of benefits. 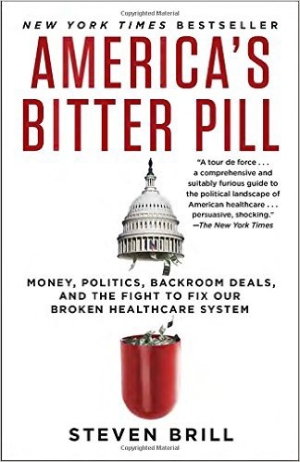 America’s total healthcare bill for 2014 is $3 trillion. That’s more than the next ten biggest spenders combined: Japan, Germany, France, China, the United Kingdom, Italy, Canada, Brazil, Spain, and Austra­lia. All that extra money produces no better,  and in many cases worse, results.

There are 31.5 MRI machines per million people in the United States but just 5.9 per million in England.

Another favorite: We spend $85.9 billion trying to treat back pain, which is as much as we spend on all of the country’s state, city, county, and town police forces. And experts say that as much as half of that is unnecessary.

We’ve created a system with 1.5 million people working in the health insurance industry but with barely half as many doctors pro­viding the actual care. And most do not ride the healthcare gravy train the way hospital administrators, drug company bosses, and imaging equipment salesmen do.

I liked to point out that Medtronic, which makes all varieties of medical devices—from surgical tools to pacemakers—is so able to charge sky-high prices that it enjoys nearly double the gross profit margin of Apple, considered to be the jewel of American high-tech companies.

And all of those high-tech advances—pacemakers, MRIs, 3-D mammograms—have produced an irony that epitomized how upside-down the healthcare marketplace is: This is the only industry where technology advances have increased costs instead of lowering them. When it comes to medical care, cutting-edge products are irresistible; they are used—and priced—accordingly.

And because we don’t control the prices of prescription drugs the way every other developed country does, we typically spend 50 per­cent more on them than what people or governments everywhere else spend. Meanwhile, nine of the ten largest pharmaceutical companies in the world have signed settlement agreements with federal prosecu­tors, paying millions or even billions in criminal and civil penalties for violating laws involving kickbacks and illegal marketing of their prod­ucts. Nine out of ten.

To prove how healthcare had become an alternative-universe econ­omy amid a country struggling with frozen incomes and crushing deficits (much of it from healthcare spending), I could recite from memory how the incomes of drug and medical device industry execu­tives had continued to skyrocket even during the recession and how much more the president of the Yale New Haven Health System made than the president of Yale University.

I even knew the outsized salary of the guy who ran the supposedly nonprofit hospital where I was struggling to fall asleep: $3.58 million.

The book has received rave reviews in the major media:

“This is one of the most important books of our time. Through revealing personal stories, dogged political reporting, and clear analysis, it makes the battle over Obama’s healthcare plan come alive and shows why it matters. It should be required reading for anyone who cares about our healthcare system.”—Walter Isaacson

“Superb . . . Brill has achieved the seemingly impossible—written an exciting book about the American health system.”—The New York Review of Books

‘Brill has pulled off something extraordinary — a thriller about market structure, government organization and billing practices…” The New York Times

“A landmark study, filled with brilliant reporting and insights, that shows how government really works—or fails to work.”—Bob Woodward

“America’s Bitter Pill is deeply impressive, an important diagnosis of what America needs to know if we’re ever to develop a healthcare system that is fair, efficient, and effective.”—Tom Brokaw

“In America’s Bitter Pill, Steven Brill brilliantly ties together not only the saga of Obamacare, but also the larger story of our dysfunctional healthcare system and its disastrous impact on both businesses and ordinary Americans. In a gripping narrative, his thorough reporting is made all the more powerful by his own scary experience looking up from a gurney.”—Arianna Huffington

But critics agree that Brill’s analysis of the obscene profits obtained by industry — in particular, Big Pharma, “nonprofit” hospitals, and medical device companies — is brilliant; they criticize his solutions to fix the unsustainably costly monster.

John Geyman, MD, Professor Emeritus, University of Washington School of Medicine, whose own just released book, How Obamacare Is Unsustainable: Why We Need a Single Payer Solution for All Americans, notes in his review of Brill’s book, on the Huffington Post: 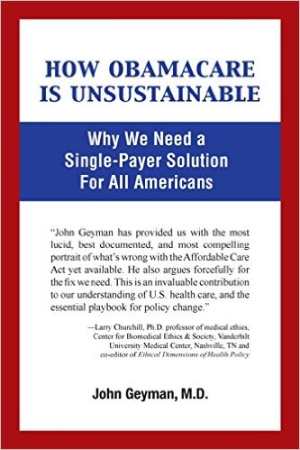 “Recent years have seen a growing information base of how they do it, including T. R. Reid’s excellent 2009 book The Healing of America: A Global Quest for Better, Cheaper, and Fairer Health Care, in which he notes, after study of the experience in France, Germany, Japan, the UK, and Canada, that:

The American system does well when it comes to providing medical care, but has a rotten system for financing that care… All the other rich countries have found financing models that cover everybody and they still spend much less than we do. We’ve ignored those foreign models, partly because of “American exceptionalism” — the notion that the United States has nothing to learn from the rest of the world.

Brill also ignores long-standing efforts in this country to enact universal coverage through a single-payer system, improved Medicare for all, as embodied in John Conyers’ bill in the House, H. R. 676. He cavalierly dismisses this alternative in these words: [My proposed regulations are] certainly more realistic than pining away for a public single-payer system that is never going to happen.”

We still need to ask more fundamental questions before we can see how to go forward with real health care reform, such as: who is the health care system for? (our current answer is the profiteering, mostly corporate stakeholders, not patients and their families); should health care be just another commodity for sale on an open market?; and is health care a personal right (as it is in most advanced countries), or a privilege based on ability to pay?.

Brill and I agree on one reality — the ACA is unsustainable because of its inefficiency, increasing bureaucracy, and unaffordable costs to taxpayers as well as patients and families.”