The betrayal of trust by the medical establishment is just as troubling. Mainstream medical doctors have completely abdicated their Hippocratic Oath to “do no harm”. They have tacitly endorsed the increasingly coercive tactics and use of the police to intimidate and harass innocent parents who are acting in what they believe, are the best interest of their young children.  Who has the legal, much less moral right to intervene?

We begin with the most recently reported travesty in Arizona: 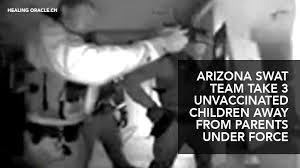 Police with guns drawn broke down the door of an Arizona home and ordered three children into the custody of the Department of Child Safety because the parents had refused to take their son with a fever to the hospital.

Sarah Beck and Brooks Bryce brought their feverish 2-year-old son to a clinic in late February and were told he had a temperature of 105, they said to NBC affiliate KPNX. The doctor ordered the parents to bring the boy — who had not been vaccinated, according to azcentral.com — to a hospital, but by the time they got home, his fever had decreased to 102, and they decided not to.

When the doctor found out the child had never made it to the hospital, the doctor called DCS who contacted the Chandler Police Department. When police arrived, the parents wouldn’t let them into the house. 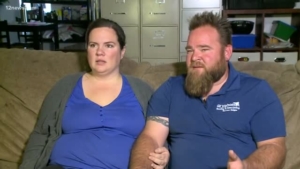 “They treated us like criminals, busting in our door. I mean, I don’t know what kind of trauma that did to my kids. Where are my kids right now is what I want to know”

State Rep. Kelly Townsend, who has worked on legislation requiring DCS to get a search warrant before removing a child from a home, called the incident a “miscarriage of justice and a shame to the State of Arizona.” Townsend said in a statement on March 25:

“This mother is nearly 9 months pregnant and her baby will be born soon. I have great concern that DCS will also take this infant over a misdiagnosis by the Dr., who thought the child might have meningitis, when actually he had RSV (Respiratory syncytial virus). “I call on DCS to immediately return the children who are also being traumatized due to this misdiagnosis. The parents were correct, the doctor was wrong.”

The Arizona Department of Child Safety and the Chandler Police Department did not immediately respond to requests for comment from NBC News.

The unprecedented house arrest of unvaccinated children in Rockland County is a developing story. People feel unfairly targeted for vaccination by the city and state departments of health and recognize  shades of Antisemitism. The story was reported fairly by Lev Facher in STAT News:

In A Religious N.Y. Community, An Unprecedented Response To Measles Puts Trust In Government To The Test, March 29, 2019 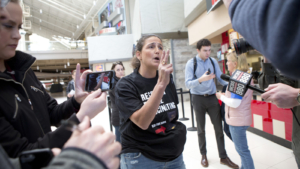 Stephanie Mahairas, who identified herself as a Christian, said she is protesting on behalf of a Jewish community that had been coerced into vaccine compliance. She sported a shirt reading “research before vaccinating,” and admonished those listening to look up the Vaccine Injury Compensation Program. The federal system awards settlements to individuals harmed by vaccines, most often by rare allergic reactions, and paid out over 4,000 settlements in the past 11 years — roughly one per every 1 million vaccine doses administered.

In a press conference announcing the ban, Day cited “pockets of resistance” to public-health efforts, without indicating such areas were in Jewish neighborhoods. A meeting to explain the impending action, which Day’s staff called early this week with an informal council of rabbis in traditionally Jewish neighborhoods, was attended by just two rabbis.

The focus has remained on the Orthodox community. It was noted that the ban was issued when there were only 4 remaining measles cases, And that the ban was issued just as preparations were begun for Passover, a major Jewish holiday, beginning on April 19. Many in the greater New York area spend time in Israel for religious studies following their teenage years, and travel over the holidays to spend time with their families.

Aron Wieder, a county legislator and leader in the Orthodox community stated: “Unfortunately, the last couple of months, people have perpetrated the notion that this is an issue of the Orthodox Jewish community. People who quite frankly I would call anti-Semitic have been creating this notion that Orthodox Jews don’t vaccinate their children.”

Community leaders believe the ban on unvaccinated children in public spaces will do little to alleviate those suspicions and could also mark Orthodox Jews as a posing a threat, thereby further fomenting anti-Semitism in the broader community.

“People will go underground, people are not going to work with the health officials.”

Read also: Why Do Some Ultra-Orthodox Jews Defy Their Rabbis And Refuse Measles Vaccines? Feldman A. The Forward 2019.

A physician who is sympathetic to those who refuse to vaccinate in accordance with public health policy — but must remain anonymous to protect his professional license– stated:

“In the community, people are together, and they can withstand enormous pressure from the system, when they feel the system is saying to do something that is not in their kid’s best interest.”

Some major rabbis have said it’s okay not to vaccinate children before sending them to school, including three members of the top rabbinical council of Agudath Israel of America, the leading ultra-Orthodox umbrella organization. The three rabbis signed onto a letter that stated that any parent who [has] “done his research” is allowed to go against the advice of the medical establishment.

Yael Tusk, a 35-year-old Chinese medicine practitioner in Jerusalem who identifies as Orthodox, wrote in an email: