“One aspect of the chemical warfare research program on mustard gas involved race-based human experimentation. In at least nine research projects conducted during the 1940s, scientists investigated how so-called racial differences affected the impact of mustard gas exposure on the bodies of soldiers. Building on cultural beliefs about “race,” these studies occurred on military bases and universities, which became places for racialized human experimentation.”

“Historians of race and American medicine have documented over two centuries of race-based scientific exploitation. There is a long history of the use and abuse of racialized bodies in the name of advancing medical knowledge…

Beginning with the efforts to justify slavery, physicians and scientists interpreted any differences as signaling black inferiority… Scientists’ expectation of uniformity within racial groups and differences across racial groups was a belief repeated across at least two centuries of American research.

Yet, their assumptions were not proven in their studies, and researchers admitted that individual variation was the most significant finding…their own research led them to conclude that ‘race’ provided little, if any, meaningful health information.”  (Susan Smith. “Mustard Gas and American Race-Based Human Experimentation in World War II in The Journal of Law, Medicine & Ethics (2008)

Canadian historian Susan Smith examined “the risks of racialized science and the logic of racial thinking” as revealed in nine mustard gas experiments. She was the very first scholar who reported that at least nine mustard gas research projects during the 1940s were designed to look for so-called racial differences that were thought to affect the impact of mustard gas exposure on the bodies of soldiers. Most likely, the military sought to find a “scientific” rationalization for assigning African-American and Puerto Rican soldiers to the front lines where an assault using mustard gas was likely.

During WW II, African-American, Japanese-American and Puerto Rican troops were confined to segregated units. They were considered less capable than their white counterparts; most were assigned to menial jobs, such as cooking and driving dump trucks.

Mustard gas damages DNA within seconds after contact.
It causes painful skin blisters and burns, and it can lead to serious, and sometimes life-threatening illnesses including leukemia, skin cancer, emphysema and asthma. But that did not deter medical scientists from subjecting soldiers to these severe consequences.

Some of the men were clothed, wearing gas masks; others were naked with no mask. All were led into a wooden chamber with mustard gas piping hooked in. Blocks of ice and fans were inside of the chamber, to increase humidity levels and heighten the effect of the gas on a human subject’s skin. Once the door closed, it could not be opened from the inside.

“scientists investigated how so-called racial differences affected the impact of mustard gas exposure on the bodies of soldiers… these studies occurred on military bases and universities, which became places for racialized human experimentation…Medical scientists conducted these studies at… Cornell University Medical College, the University of Chicago Toxicity Laboratory, the Institute for Medical Research in Cincinnati, and the Rockefeller Institute for Medical Research, and the San Jose Project in Puerto Rico.”

The final report (1947) was a meta-analysis of the mustard studies by Cornell scientists in which they concluded:

“All investigators agree that the skin of Negroes as a group is much less sensitive to mustard gas than the skin of whites.” They suggested that one reason that African Americans were less sensitive to mustard gas exposure than whites was their thicker skin! As Susan Smith notes, “Beginning with the efforts to justify slavery, physicians and scientists interpreted any differences as signaling black inferiority.”

But Susan Smith’s ground breaking article did not arouse interest among professional ethicists or the medical community; nor was it picked up by the media. It would appear that neither Nuremberg nor Tuskegee altered the mind-set of the medical research community.

The gross human violations were ignored until 2015, when NPR reported the findings of its own six month investigation in June 2015.

Officials at the Department of Veterans Affairs told NPR that  the agency had been searching since 1993, but was able to locate only 610 men out of 4,000 whom the military subjected to mustard gas experiments. A senior VA adviser for benefits claimed the US military records had “no  Social Security numbers, no addresses, no way of identifying them. Although, we tried.”

Within six months, NPR was able to compile a database that  includes more than 3,900 men and obtained information about the last known location of more than 1,700 of them.

NPR’s database is the first public database of American veterans who were secretly exposed to mustard gas in military experiments conducted during World War II. Information in the database comes from records NPR obtained in the course of reporting on the secret experiments.

“Our investigation found that the VA denied compensation to veterans who qualified for it, and that in addition to evaluating protective suits and gas masks, some of the tests were conducted to look for racial differences that could be exploited in combat.”

All of the World War II experiments with mustard gas were done in secret and weren’t recorded on the subjects’ official military records. Therefore, most do not have proof of what they went through. They received no follow-up health care or monitoring of any kind. And they were sworn to secrecy about the tests under threat of dishonorable discharge and military prison time, leaving some unable to receive adequate medical treatment for their injuries, because they couldn’t tell doctors what happened to them.

NPR reported that not only African Americans were used in these experiments; Japanese-Americans and Puerto Rican solders were also singled out. White soldiers were used as “scientific control” “normal” groups for comparison with minorities. 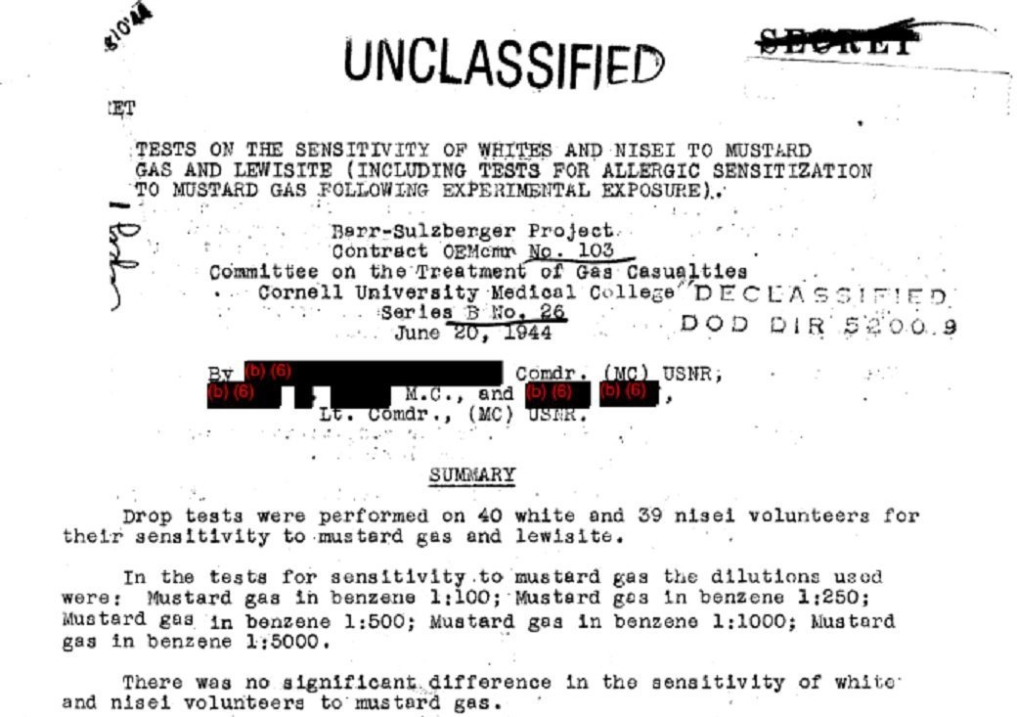 Despite months of federal records requests, NPR still hasn’t been given access to hundreds of pages of documents related to the experiments, which could provide confirmation of the motivations behind them. Much of what we know about the experiments has been provided by the remaining living test subjects.

Military documents show more than 100 experiments took place on the Panamanian island, chosen for its climate, which is similar to islands in the Pacific. Its main function, according to military documents obtained by NPR, was to gather data on “the behavior of lethal chemical agents.”

Even once the program was declassified, however, the race-based experiments remained largely a secret until a researcher in Canada disclosed some of the details in 2008. She believes that black and Puerto Rican troops were tested in search of an ‘ideal chemical soldier.”  If they were more resistant, they could be used on the front lines while white soldiers stayed back, protected from the gas.  (NPR, 2015)

Juan Lopez Negron, who is Puerto Rican, says he was involved in experiments known as the San Jose Project which caused almost all soldiers to get sick immediately. Negron spent three weeks in a hospital with a bad fever.

As a young U.S. Army soldier during World War II, Rollins Edwards knew better than to refuse an assignment. When officers led him and a dozen others into a wooden gas chamber and locked the door, he didn’t complain. None of them did. Then, a mixture of mustard gas and a similar agent called lewisite was piped inside.

“It felt like you were on fire,” recalls Edwards, now 93 years old. “Guys started screaming and hollering and trying to break out. And then some of the guys fainted. And finally they opened the door and let us out, and the guys were just, they were in bad shape.”

Rollins Edwards says that crawling through fields saturated with mustard gas day after day as a young soldier took a toll on his body.

“It took all the skin off your hands. Your hands just rotted,” he says. He never refused or questioned the experiments as they were occurring. Defiance was unthinkable, he says, especially for black soldiers. “You do what they tell you to do and you ask no questions.”

Edwards constantly scratches at the skin on his arms and legs, which still break out in rashes in the places he was burned by chemical weapons more than 70 years ago. During outbreaks, his skin falls off in flakes that pile up on the floor. For years, he carried around a jar full of the flakes to try to convince people of what he went through.

One of the experiments uncovered by NPR — the Barr-Sulzberger Project — was conducted at Cornell University Medical College. The purpose was to test “the sensitivity of whites and Nisei to mustard gas and lewisite (including tests for allergic sensitization following experimental exposure” It describes how researchers exposed 39 Japanese American soldiers and 40 white “volunteers”to mustard and lewisite agents over the course of 20 days. In each of in every variation tested, the researchers found “no significant differences in the sensitivity of white and nisei volunteers to mustard gas…[or] to lewisite. The experiment was conducted in the Spring of 1944.

Of note, there is a marked difference in the description given by the men who had undergone mustard gas and lewisite exposure experiments, and the researchers’ descriptions that — like their Nazi colleagues — disregard entirely the suffering they inflict on their human subjects.

“These men participated beyond the call of duty by subjecting themselves to pain, discomfort, and possible permanent injury for the advancement of research in protection of our armed forces.”

The list of names where Louis Bessho’s name appears takes on a curious similarity. Names like Tanamachi, Kawasaki, Higashi, Sasaki. More than three dozen Japanese-American names in a row.  Bessho’s son says that his father told him,

“They were interested in seeing if chemical weapons would have the same effect on Japanese as they did on white people. I guess they were contemplating having to use them on the Japanese.”

The VA had promised to locate and make compensation to each individual subjected to toxic chemical agents, such as mustard gas. They reneged on their promises; less than 20% have been located by the VA. And of those, very few have ever received any reparations for their suffering.

The surviving men describe “an unending cycle of appeals to the VA and subsequent denials, as they struggled to get government benefits for their ordeal following their exposure to mustard gas experiments. Most of the men gave up out of frustration. The government is dragging its feet, no doubt hoping the men who are in their 80s and 90s will soon die.