Before the Coronavirus Pandemic a Cascade of Warnings Went Unheeded

The War Zone reports that the federal government released 85 million N95 masks to handle the H1N1 outbreak of 2009; it failed to replenish the stock, resulting in a major shortage that puts doctors, nurses, and health care providers in hospitals at high risk. At retail, the masks cost between .75cents and $1.25.

“The N95 masks are considered as essential for healthcare workers who treat patients with infectious diseases that can be transmitted through droplets of bodily fluids, offering them some certainty that they themselves will not end up contracting the patient’s illness.

The defense budget for the 2020 Fiscal Year is $738 billion. Funding the larger intelligence and national security ecosystem costs many billions of dollars in addition to this sum. This is money being spent in the name of protecting the American people. For a country that can spend that type of treasure on weapons and warfighting infrastructure, it is downright astonishing that it can’t keep a stockpile of cheap respirators around, or at least guarantee the domestic production base to rapidly build more, in order to fight a pandemic that was not only far from unthinkable, it was inevitable.

This simple fact alone should make you furious and question the priorities of the U.S. government and those who are tasked with presiding over it.” [The War Zone]

Politico reports that in January 2017, days before Trump’s inauguration, officials of the outgoing Obama administration briefed officials of the incoming Trump administration for 3 hours about the need to prepare a coordinated response for possible infectious pandemics. They cited specific challenges such as: “shortages of ventilators, anti-viral drugs and other medical essentials”. To address the challenges that had been laid bare by the Ebola epidemic, the Obama administration had set up the National Security Council for Global Health Security and Biodefense in 2015.  In 2018, President Trump’s national security adviser, John Bolton, shuttered the NSC office overseeing responses to pandemics.

He did so, at just about the time that a group of infectious disease experts, including Dr. Anthony Fauci, director of the US National Institute of Allergy and Infectious Diseases, met with the World Health Organization to discuss the need to prepare for the next pandemic, in the wake of the Ebola SARS and Zika epidemics. They named the next pandemic “Disease X”, which they hypothesized would be a novel pathogen that had not yet entered the human population from its animal host. In addition to Disease X, they identified seven other potential global disease threats, each lacking an effective drug or vaccine. CNN reported that the 2018 R&D Blueprint, a strategy and preparedness plan, had been published in February 2018.

From January to August, 2019, officials of the Trump administration in conjunction with dozens of states and federal agencies, insurance companies and major hospitals conducted a series of simulated exercises, titled “Crimson Contagion.” They demonstrated just how unprepared and uncoordinated the federal government would be if confronted by a lethal virus for which there was no treatment.

“Among the most tangible results of the ‘Crimson Contagion’ scenario was an inability to quickly replenish certain medical supplies, given that much of the product comes from overseas — a phenomenon that the U.S. is currently experiencing with the COVID-19 pandemic thanks to poor maintenance of the Strategic National Stockpile, which currently maintains a cache only 12 million N95 respirators, among other critical pieces of medical gear.”

A World At Risk,a report by the Global Preparedness Monitoring Board (Sept. 2019) emphasizes that:

“Leaders at all levels hold the key. It is their responsibility to prioritize preparedness with a whole-of-society approach that ensures all are involved and all are protected.”

As Asha George, a former Army intelligence officer and executive director of the Bipartisan Commission on Biodefense, told Task & Purpose:

“The U.S. was absolutely not prepared for a biological event like the spread of COVID-19. Any disaster, no matter what, reveals our vulnerabilities. This is exactly what we saw happen with Hurricane Katrina, where the federal response was flawed and the state and local authorities simply were prepared.”

Mainstream media did not report about the simulated exercises. The Pandora Report dated December 6, 2019, a publication by biodefense professionals at the George Mason University, listed six disturbing findings, noting that “a final report with greater detail of the after-action review is forthcoming.”

Not until March 20, 2020, did the New York Times report that officials of HHS, Homeland Security, and the White House National Security Council, were fully aware of the potential for a respiratory virus outbreak originating in China could spread quickly and overwhelm the nation.

A draft of the Undisclosed report:

“laid out in stark detail repeated cases of ‘confusion’ in the exercise. Federal agencies jockeyed over who was in charge. State officials and local hospitals struggled to figure out what kind of equipment was stockpiled or available. Cities and states went their own way on school closings. Many of the potentially deadly consequences of a failure to address the shortcomings are now playing out in all-too-real fashion across the country.”

“Three times over the past four years [ in 2016, 2017, 2019] the U.S. government, across two administrations, had grappled in depth with what a pandemic would look like, identifying likely shortcomings and in some cases recommending specific action and doing nothing to prevent the tragic consequences.”

However, as if to ensure that no steps would be taken to prevent a catastrophic situation, the draft report was marked “not to be disclosed” and was shelved. 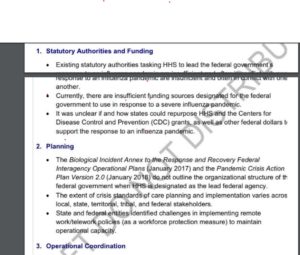 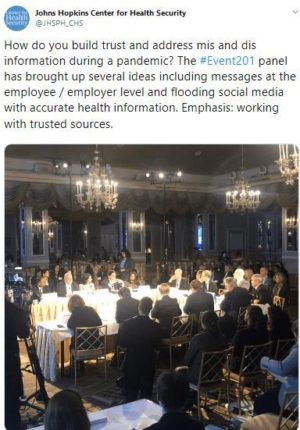 On October 18, 2019, Event 201: a simulated pandemic exercise was convened by the Johns Hopkins Center for Health Security in partnership with the World Economic Forum, the Bill & Melinda Gates Foundation. This Event took place at the posh Pierre Hotel in New York City; it was attended by world economic leaders representing, financial institutions, global health, and security. The concern seemed to be how to ensure public trust by controlling “trusted sources” of information and flooding social media.

The simulation, Event 201, focused on coronavirus and projected 65 million deaths.

Officials have said the state would need to double its available hospital beds to 100,000 and could be short as many as 25,000 ventilators.

At other hospitals across the city and beyond, workers have turned to social media to plead for masks.

It Feels Like a War Zone’: Doctors and Nurses Plead for Masks on Social Media 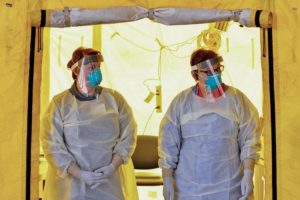 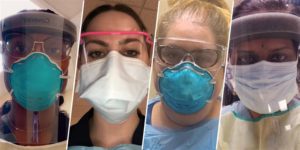 Criminal negligence is putting the lives of doctors and nurses at high risk. Many doctors have been expressly warned by their administration not to speak publicly about conditions. 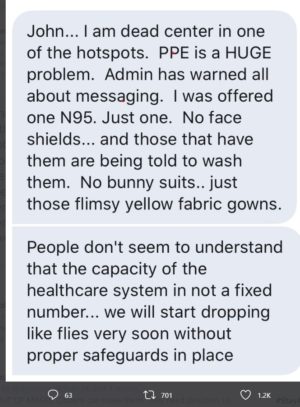 The following commentary John Mandrola, MD was posted on MEDSCAPE (behind a paywall)

With these words, spoken March 18, during a joint webinar of the Chinese Cardiac Society and the American College of Cardiology, Professor Bin Cao, MD, from China, jolted healthcare workers across the world. And while China reported good news this week, with its first day of no new local infections in Wuhan province, the United States and other countries face the beginning of the surge.

The analogy of a coming storm is apt. It’s as if we can now feel the winds and see the dark clouds. But even as we begin to see patients with COVID-19, and some hospitals in hot spots feel the surge, we won’t be fully protected against the contagious virus.

Numerous colleagues have direct messaged (DM) me on Twitter that their hospital is rationing PPE and supplies are running short. C. Michael Gibson, MD, tweeted that he has received 10 DMs [direct messages] about shortages of masks. In a Twitter poll with more than 300 votes, a third of respondents said their hospital had no masks, and nearly half said they were allowed only one mask.

Another chilling message received through the privacy of direct messaging: many doctors have been expressly told by their administration not to speak publicly about conditions. And few will go against their employer out of fear of being fired. That means the stories about PPE shortages likely underestimate the problem.

If we were to follow Cao’s advice—that it’s a pandemic life—we would use masks and PPE routinely, and we would test patients immediately so that those infected can be put on isolation wards. These seemingly simple actions would protect caregivers. But we can’t do that because we don’t have access to rapid testing or PPE.

“HCP [health care provider] might use homemade masks, such as a bandana or scarf, for the care of patients with COVID19. However homemade masks are not considered PPE.”

Bandanas? Are they serious? In the richest country in the world?

To be clear, hospital administrators did not cause PPE shortages. Leadership at my hospital has not told me to shut up. I see them working hard to help us. While administrators are less likely to be exposed, they have a huge role to play in getting us PPE, changing policies on the move, and keeping the hospital financially solvent. Indeed, we want administrators to succeed.

On an e-group with colleagues, most of whom are young and healthy, a friend wrote, “Every time I read about a person with no comorbidities on a ventilator, my heart sinks.”

I remember these sensations from the 1990s, when we placed lines in patients with HIV. But at least then we could identify infected patients; we can’t do that with COVID-19. And this week, the New England Journal of Medicine reports the virus can be passed through the air.

It’s weird: the feeling that your job could take your life.

A month ago, we were providers tapping on our electronic health records and marching to the whims of administrators. Now, nurses and doctors report to work knowing that we will likely become infected.

While we don’t know the exact virulence of this disease, the evidence is clear that some of us will become ill and die. It’s a numbers game.

Be safe and be lucky, colleagues. Respect to you all.

[John Mandrola practices cardiac electrophysiology in Louisville, Kentucky, and is a writer and podcaster for Medscape. He espouses a conservative approach to medical practice. He participates in clinical research and writes often about the state of medical evidence.]

Endonuclease Fingerprint Indicates a Synthetic Origin of SARS-CoV-2  SARS-CoV-2 is the virus that caused the disease COVID-19.   END_OF_DOCUMENT_TOKEN_TO_BE_REPLACED