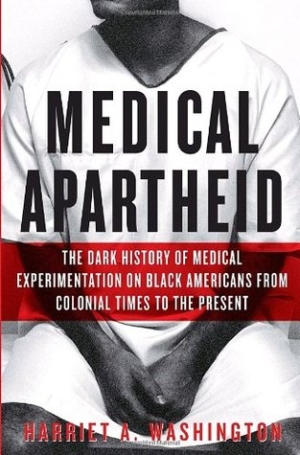 When invited to become subjects in a medical experiment, most African-Americans decline; the memory of Tuskegee is indelibly ingrained in their communal memory. Their distrust is buttressed by the evidence; before and since Tuskegee. This community has been subjected to a continuum pattern of discrimination and exploitation by the medical establishment.

Under the auspices of the U.S. Government critically ill patients are exposed to increased risk of Death without their knowledge or Informed Consent in medical experiments.

In November 1996, the FDA created a pathway allowing “exception from informed consent” for emergency research involving “an FDA-regulated product and conducted or supported by HHS” [Health and Human Services]. FDA Guidelines for Institutional Review Boards, Clinical Investigators and Sponsors have been updated periodically, the most recent in 2013.

A study by investigators at the Harvard Medical School — A Systematic Review Of The Food And Drug Administration’s ‘Exception From Informed Consent’ Pathway William B. Feldman , Spencer Phillips Hey, and Aaron S. Kesselheim, Health Affairs, October 2018 — examined available data and found that since the FDA issued a waiver of informed consent for emergency research, there have been at least 41 trials involving 46,964 patients. Of these, 96% were enrolled without their knowledge or informed consent. 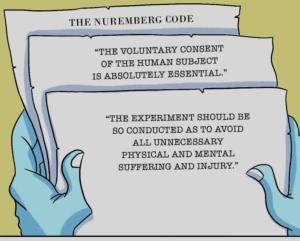 At the very least, as Dr. Steven Joffe, director of medical ethics at the University of Pennsylvania Perelman School of Medicine stated: “To the extent that there are risks and burdens associated with clinical trials, justice requires that those be spread fairly and evenly across populations.”

However, the Harvard team reports that they have identified a disproportionate number of African-Americans in non-consensual experimental clinical research. This confirms a continuing immoral pattern, one that targets a segment of the population who are discriminated against and generally devalued by America’s elite power structure.

[Inasmuch as a pay wall prevents free public access to the journal Health Affairs, a journal touted as “the bible of health policy”, we rely on, STAT News, a secondary source for the basic facts.]

“Twenty-nine percent of the people enrolled in trials for which the researchers could find data were identified as African-American. That stands in contrast to the fact that African-Americans or blacks make up about 13 percent of the U.S. population and about 14 percent of total clinical trial participants, according to the US Census Bureau and the FDA, respectively”.

The patients who were recruited without their knowledge or consent were used as guinea pigs in experiments that put them at increased risk of serious harm. Indeed the researchers report that only:

“Two (8 percent) of the twenty-four superiority trials demonstrated a benefit from the experimental interventions. Many interventions were associated with adverse effects, including increased mortality, neurological deficits, and myocardial infarctions. Nearly one-third of US patients in EFIC trials were African American.”

The authors state that fewer than 1% of patient/ subjects withdrew from the trial before the primary endpoint.

* How could they withdraw from the trial, if they didn’t know they were in an experimental trial?

Was this non-sequitur by the Harvard investigators meant to diminish the moral and medical injustice committed against the patient/ subjects who were exploited without their consent and against their best interest?

The culpability of the authoritative medical officials and institutions involved — including, the National Institutes of Health, academic medical institutions, their affiliated hospitals, and the medical doctors / researchers — cannot be so easily whitewashed away.

Adding insult to injury, a ProPublica investigation, found that “black and Native Americans are under-represented in clinical trials of new drugs, even when the treatment is aimed at a type of cancer that disproportionately affects them”. (“Black Patients Miss Out On Promising Cancer Drugs” by Caroline Chen and Riley Wong, ProPublica, Sept. 2018)

Examples of non- consensual exploitative experiments that put patients at increased the risk of death:

2018: “CLOVER Sepsis Clinical Trial Exposes Human Subjects to Grave Dangers, Such an Experiment Would Normally be Conducted on Laboratory Animals

Adding insult to injury: Malfeasance
A study by scientists at the Center for Disease Control and Prevention (CDC) showed that African American males receiving the Measles Mumps Rubella (MMR) vaccine prior to 24 months of age or 36 months of age were more likely to be diagnosed with autism.  CDC concealed the evidence and published false information in the report published in the journal Pediatrics (2004). (Read the statement by Dr. William Thompson, CDC scientist whistleblower)

A ProPublica investigation, found that “black and Native Americans are under-represented in clinical trials of new drugs, even when the treatment is aimed at a type of cancer that disproportionately affects them”. (“Black Patients Miss Out On Promising Cancer Drugs” by Caroline Chen and Riley Wong, ProPublica, Sept. 2018)

As the STATNews article inadvertently (perhaps) shows, the medical research establishment — including its ethicists — view patient autonomy and the right of patients to give or refuse consent to research as a problem impeding “progress”. They have resorted to circumventing the Nuremberg Code inviolable admonition — “The informed consent of the human subject is absolutely essential” — by substituting  vague and non-binding “community consent” as if that was equivalent!

African-Americans are enrolled in clinical trials that do not require patients to give individual consent at a disproportionately high level, according to a study published Monday.

Scientists are allowed to conduct these experiments without obtaining consent from each individual participant because they are testing emergency medical procedures, and often the patients physically can’t respond. For example, scientists might be comparing two different methods of CPR, or examining the effect of different drug cocktails to treat a heart attack. So, the Food and Drug Administration allows researchers to test out the treatment anyway, as long as they meet certain conditions beforehand.

Twenty-nine percent of the people enrolled in trials for which the researchers could find data were identified as African-American. That stands in contrast to the fact that African-Americans or blacks make up about 13 percent of the U.S. population and about 14 percent of total clinical trial participants, according to the US Census Bureau and the FDA, respectively.

The study, published in Health Affairs, also found that researchers who conduct these consent-free trials often do not publish information about the demographics of the trial participants.

“To the extent that there are risks and burdens associated with clinical trials, justice requires that those be spread fairly and evenly across populations,” said Dr. Steven Joffe, director of medical ethics at the University of Pennsylvania Perelman School of Medicine.

The large number of African-Americans in studies exempted from typical consent requirements contrasts with their low participation rates in some other kinds of trials. Clinical trials can present unique opportunities for patients, giving them an early shot at experimental treatments that might extend their lives, though many therapies turn out not to work and can also carry worrisome risks. A recent ProPublica investigation found that African-Americans are underrepresented in clinical trials for new cancer drugs, denying them the opportunity for potentially lifesaving treatment.

Consent for participation in medical research is an issue that resonates especially deeply for blacks. In the infamous Tuskegee study, conducted by the U.S. government from 1932 to 1972, African-American sharecroppers with syphilis were left untreated, without their consent. Since then, rules governing informed consent have become much tighter, but one legacy of Tuskegee is lingering distrust of the medical establishment among many African-Americans.

Researchers who conduct consent-free trials are supposed to make public their “demographic” data from the studies, according to federal regulations. But the rules don’t say exactly which data should be made available.

“We do think it’s important to the extent possible to have the utmost transparency when it comes to race and consent in these trials,” said Dr. William Feldman, a fellow at Brigham and Women’s Hospital who led the study. Feldman said that his team has not shared the names of scientists who did not publish such data with the FDA.

“It just hasn’t come up,” Feldman said. He added that the regulations don’t specify exactly how scientists have to make these data available.

The FDA declined to comment on the paper. An FDA spokesperson, Jeremy Kahn, said that the agency “evaluates [studies] as part of the body of evidence to further our understanding about a particular issue and assist in our mission to protect public health.”

To conduct his analysis, Feldman reached out to the researchers who did not publish their data individually. He was able to acquire data on the race of 17,302 individuals in the U.S. who were part of these trials, out of 23,833 total enrolled individuals. Feldman only looked at completed trials, and excluded some because they enrolled the same participants.

While the researchers can’t say for sure why African-Americans are overrepresented in these trials that do not require consent, the paper provides a possible explanation: Large academic medical centers where these studies are conducted are located in places where many African-Americans suffer from the particular health conditions being studied.

Dr. Jennifer Miller, an assistant professor at the Yale School of Medicine who was not involved in the research, said in an email that it’s difficult in general to determine if clinical trial participants are representative of individuals afflicted with the diseases in question.

“We lack demographic information and patient profiles for many diseases, making it hard to understand if we are enrolling the right types of patients in trials,” Miller said, adding that by “right,” she meant “demographically and clinically representative patients.”

The paper’s authors also noted in the paper that many of the trials did not find significant benefits from the experimental procedures, and in some cases, patients were worse-off with the new therapy.

But Joffe said that he doesn’t want to jump to the conclusion that this means these studies should no longer be conducted. Consider what might happen if that were the case: medical professionals could just change how they practice without testing it. Paramedics could, for example, change the way they do CPR without rigorously testing it. Nobody would know if patients were better off or worse off.

Feldman said that his team is working on a follow-up paper to look at how researchers consult with the community before launching one of these consent-free trials, and how this is related to who ends up being tested in the trials.

Note:Dr. Sims made his career by exploiting African-American slave women in the South. (The Medical Ethics of the ‘Father of Gynaecology’, Dr. J. Marion Sims, Durrenda Ojanuga, Journal of Medical Ethics, 1993). He then moved to New York City where he exploited poor Irish women in his gynecological experiments.

Despite documented evidence of gross abuse — he subjected one slave woman to 30 surgeries without anesthesia — the medical community steadfastly defended and honored Dr. Sims as the “Father of gynecology”: in textbooks, with endowed university chairs, and numerous statues. Their rationale is that his contributions to medical science outweighs ethical violations. That culture within the medical establishment is the root of the problem that has led doctors in positions of power to commit medical atrocities. The Greeks recognized that physicians’ skills can be  used to cause harm; that is the reason they required physicians to swear that they would “do no harm”. 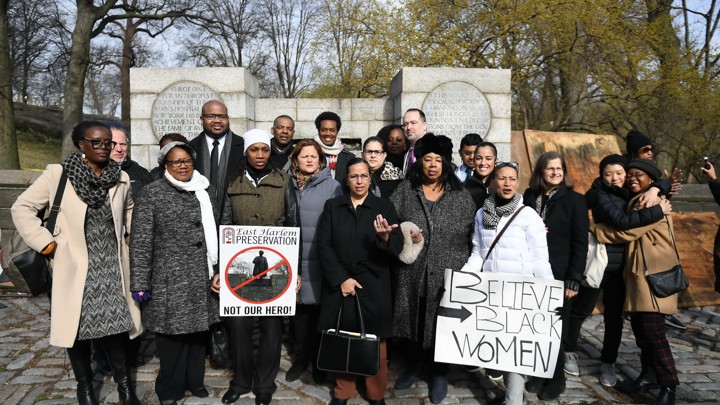