A U.S. Zika Vaccine Trial Has a Problem: Mother Nature Removed the Threat of Infection

Zika had once been considered harmless, because about 80% of people who are infected show no symptoms. But alarms were sounded in 2015, when Brazilian officials suspected Zika as the cause of an outbreak of microcephaly brain malformation in babies. Public health officials rang the alarm predicting that millions of people would be infected.

In September 2016, after bitter debate in Congress, then-President Obama approved a $1.1 billion funding package for the U.S. government Zika response. The New York Times, taking its cue from the vaccine lobby noted that: “An outbreak of Zika provides an ideal testing ground for a vaccine” enabling researchers to evaluate its efficacy. The virus is spread by mosquitoes and sexual intercourse. The experimental Zika vaccine is a controversial DNA vaccine, never before used in humans. An earlier NIH attempt to develop a West Nile DNA vaccine was aborted. 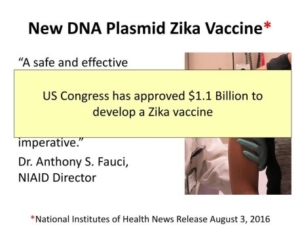 The NIAID launched a multi-site, $110 million Zika vaccine trial in nine countries in Latin America and the Caribbean. Dr. Fauci predicted, “most of us in the field feel that we will get a vaccine for Zika…it’s a question of what’s the best one.” The chase was on with numerous candidates racing to win a place in the highly profitable market sector.

But the unexpected happened; the virus has disappeared. The adults who had been infected recovered without treatment—and they have gained the advantage of lifetime immunity. Zika no longer poses a health problem for humans. In 2017, when “new cases have dropped to a trickle throughout the Americas” Sanofi pulled the plug on its Zika vaccine.

Dr. Fauci acknowledges that:  “Right now, there are no infections, and certainly not enough to even think about an efficacy signal at this point”.

Science Magazine, notes: “Further complicating the trial, many people throughout Latin America and the Caribbean have already been infected with Zika and recovered, which has left them immune to the virus and hence ineligible for vaccine trials.”

A Radical Violation of Medical Ethics

According to Science Magazine, NIAID officials and the researchers involved in the Zika vaccine trial, “are pressing ahead”. To overcome “the problem” that Mother Nature resolved – NIAID officials and the researchers are intent on facilitating the continuation of the vaccine trial. They propose to intentionally infect people who may then spread the virus and create an epidemic that has receded. Their reasoning:
“a vaccine might someday be needed.”

Surely that is a gross deviation from medical ethics. In 2017, an ethics committee declined to approve such a move. The committee report disappointed the principal Zika study leader, Anna Durbin of Johns Hopkins University who called it “a great setback.”

Dr. Esper Kallás, principal investigator for the NIAID local site in Brazil, stated: “Everybody is concerned about it. It’s a lot of investment.”
Seema Shah, JD[cite ref_id=37598]   identified as a “bioethicist” at Northwestern University’s Feinberg School of Medicine is quoted stating: “There’s a compelling reason to conduct a human challenge trial now“.

NIAID Director Fauci defends the ethically dubious, unsupportable position:  “It’s a risk that you’ll spend this money and never use the vaccine, but balancing the importance of this infection and the impact it could have, we felt it was a good decision to move ahead. And I would be happy to defend that anywhere.”

The motivating factors for completing the trial by resorting to unethical exposure of human subjects to potentially serious harm, is that a Zika vaccine will be brought to market – whether or not Zika poses a threat. The trial is about protecting the financial investment, career advancement for the researchers, and launching yet another profit generating vaccine.