A five-year government supported study, “Affective Neuroscience of Pediatric Bipolar Disorder,” was halted after  parents complained to the University of Illinois in Chicago. According to documents obtained by ProPublica Illinois, Dr. Mani Pavuluri, a prominent psychiatrist who had founded the Pediatric Mood Disorders Program at UIC which was a nationally known clinic to which psychiatrists around the country referred children with so-called bipolar disorder. Dr. Pavuluri was paid $200,000 a year plus bonuses for overseeing the care of thousands of children. [It should be noted that prior to the aggressive marketing of powerful psychotropic drugs, children were not given a diagnosis of  bipolar disorder. Some critics  have argued that psychiatrists, under the influence of the pharmaceutical industry, began to dispense the bipolar diagnosis in children to justify the prescribing of powerful mind-altering drugs for children. [1]

According to documents obtained by ProPublica, Dr. Pavuluri received $3.1 million in a government grant from the National Institute of Mental Health (NIMH), for a lithium study in children which she began in 2009. It was halted in 2013 as were her two other federally funded projects.

In 2014, the University sent a letter informing parents that children who had been enrolled in Dr. Pavuluri’s three studies may have been put at greater risk than the consent form disclosed. The study was halted for multiple ethical violations; uncharacteristically, NIMH demanded a refund of its $3 .1 million grant. 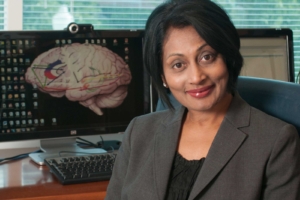 “Newly obtained records raise additional concerns about the research and oversight of Dr. Mani Pavuluri, a star pediatric psychiatrist at the University of Illinois at Chicago whose clinical trial studying the effects of the powerful drug lithium on children was shuttered for misconduct”.

Records show Pavuluri’s research was riddled with oversight failures as the IRB approved changes to the study — including lowering the minimum age of participants to 10 even though NIMH specifically prohibited that.

NIMH concluded Pavuluri tested lithium on children younger than 13 though she was told not to and failed to properly alert parents of the study’s risks. A university investigation concluded she falsified data to cover up the misconduct, according to documents.

NIMH would later conclude that about 86 percent of the subjects did not meet the eligibility criteria to participate because they were either younger than 13, had previously used psychotropic medication or had other reasons for being ineligible, records show.

The ProPublica Illinois investigation found that UIC officials didn’t properly screen or monitor Pavuluri’s research — and then, after realizing she had broken rules, continued to promote her expertise to the public as she maintained an active medical practice for years. She resigned from UIC effective June 30”.

According to a website, she plans to open a treatment center, called the Brain and Wellness Institute, in Lincoln Park”.  Read more:Documents Raise New Concerns About Lithium Study on Children by Jodi S. Cohen, ProPublica, July 3, 4, 2018

[1] Read Pharmageddon by Dr. David Healy;  Your Child Does Not Have Bipolar Disorder: How  Bad Science and Good Public Relations Created the Diagnosis, Edited by Stuart Kaplan, MD]

Posted in Children at Risk
Scroll To Top