Breitbart News reported that Francis Collins, director of the National Institutes of Health (NIH), announced his resignation on Tuesday, just weeks after documents exposed that he made “untruthful” comments about U.S. federal funding of gain-of-function research at the Wuhan Institute of Virology.

Gary Ruskin, executive director of U.S. Right To Know, said the documents obtained by The Intercept provide “a road map to the high-risk research that could have led to the current pandemic.”

Hardly any media or news outlets mentioned the resignation. This would normally have led to lots of questions, such as when will Dr. Anthony Fauci, head of the National Institute of Allergies and Infectious Diseases,  follow in Dr. Collins’ footsteps, inasmuch as he repeatedly lied on camera in a Congressional hearing?? 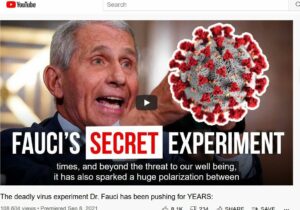 The silence of the media is but an indication of the TOTAL subservience of the media to its funders which has incapacitated the mainstream press and media. Reporters are tethered to a prescribed script — no longer capable of honest journalism.

Weeks before this announcement, Richard Ebright of Rutgers University accused Collins of making false public statements about National Institute of Allergy and Infectious Diseases (NIAID) grants to the Wuhan Institute of Virology (WIV), which have since been proven to fund the study of “chimeric SARS-related coronaviruses” which “could infect human cells.”

Ebright stated that Collins had not told the truth when asked about this research:
“assertions by the NIH Director, Francis Collins, and the NIAID Director, Anthony Fauci, that the NIH did not support gain-of-function research or potential pandemic pathogen enhancement at WIV are untruthful.”

Grasping at straws, Collins advised religious Americans hesitant about the coronavirus vaccine to think of it as a miraculous answer to their prayers.

“For somebody who’s a believer, this is what you could call an answer to prayer. If we’ve all been praying to God to somehow deliver us from this terrible pandemic, and what happens is these vaccines get developed that are safe and effective, well, why wouldn’t you want to say, ‘Thank you, God’ and roll up your sleeve?”

Breitbart New  states that it is unclear precisely what prompted Collins’ departure in the middle of the pandemic.

In 2017, the NIH under Collins’ leadership ended a three-year moratorium on gain-of-function research, which aimed to make “pathogens more potent or likely to spread in people.”

In September, the Intercept reported about several grants that the National Institute of Allergy and Infectious Diseases (NAID) — the agency that Anthony Fauci has headed since 1984 — awarded additional money to EcoHealth Alliance for gain-of-function research at the Wuhan Institute of Virology in China:

“The bat coronavirus grant provided EcoHealth Alliance with a total of $3.1 million, including $599,000 that the Wuhan Institute of Virology used in part to identify and alter bat coronaviruses likely to infect humans. Even before the pandemic, many scientists were concerned about the potential dangers associated with such experiments. The grant proposal acknowledges some of those dangers: “Fieldwork involves the highest risk of exposure to SARS or other CoVs, while working in caves with high bat density overhead and the potential for fecal dust to be inhaled.”

Gary Ruskin, executive director of U.S. Right To Know, said the documents obtained by The Intercept provide “a road map to the high-risk research that could have led to the current pandemic.”