Why milk with added bovine growth hormone (BGH) was rejected in Canada, but approved by the US FDA
Dr. Richard Wolfson describes why Health Canada rejected its approval of BGH milk.

“When we inject a hormone into an animal or a human, it affects other hormones and it can have a whole cascade of effects which no one really knows. In Europe, hormones are not permitted to be used in cows. Monsanto decided to change the name to bovine somatotropin (rBST) to avoid using the word ‘hormone’.”

When Dr. Shiv Chopra in the Canadian human safety division requested information about the long-term effects on human health, particularly on the effect on the immune system and on birth defects, he was informed that no long-term studies had been conducted.

“The only research that was done, was a 90-day study on 30 rats by two American scientists who worked for Monsanto [in 1989]. And even that study was not available to the scientists…  During the whole time period, from 1994 to 1998, the scientists at Health Canada couldn’t even get a look at it because the complete study was kept locked up and kept secret. The FDA approved BGH milk on the basis of the same abstract published in Science Magazine.” (Read more: “How Bovine Growth Hormone was Rejected in Canada,” Richard Wolfson, 1999)

In the US, FDA’s approval process of Monsanto’s rBST milk was rigged. Three reviewers on FDA’s advisory committee had ties to Monsanto.

On April 19, 1994, The Washington Post reported that possible conflicts of interest prompted (then) Congressman Bernie Sanders and two others to the General Accounting Office (GAO) to investigate. The GAO probe validated safety concerns that had been raised by. The GAO Report concluded that “FDA Approval Should Be Withheld Until the Mastitis Issue Is Resolved” (1992). The GAO identified the following concerns: 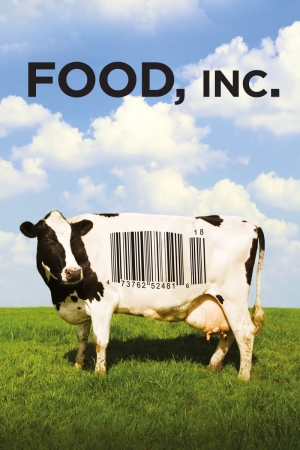 “(3) FDA considers additional rBGH research on human safety risks to be unnecessary; (4) reproductive issues remain unresolved… (6) FDA studies and other reports show that rBGH increases the mastitis rate in cows by as much as 33 percent; (7) increased mastitis leads to increases in bovine antibiotic treatment, which greatens the potential of antibiotic residues in milk and beef; (8) FDA and drug sponsors have not tested for or addressed human tolerances of increased antibiotic residues in milk or beef; (9) rBGH sponsors often fail to adhere to FDA protocol study guidelines; (10) FDA lack of labelling requirements during the investigational research phase of review allows rBGH treated products to be marketed without adequate public knowledge; and (11) the lack of a systematic tracking procedure to monitor firms and drug dosages compromises efficiency and effectiveness of the FDA review process.” (“Recombinant Bovine Growth Hormone: FDA Approval Should Be Withheld Until the Mastitis Issue Is Resolved”  GAO, 1992)

Samuel Epstein, MD, a noted geneticist and caner prevention expert whose distinguished academic research and teaching affiliations included Children’s Cancer Research Foundation, Harvard, Case Western, and the University of Illinois in Chicago. He is the author of 12 books and 270 scientific articles.

Dr. Epstein wrote letters to the FDA (in 1989 and again in 1994) as well as publishing his “grave concerns about the risks of breast cancer from the consumption of rBGH milk.” He cited research showing that: 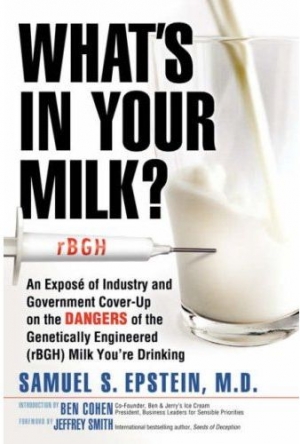 “rBGH in milk induces a sustained increase in Insulin Growth Factor (IGF-1), a growth factor for human breast cancer cells, maintaining their malignancy, progression and invasiveness… I am persuaded on the basis of these data that milk from rBST cattle constitutes a significant risk factor for breast cancer.”

What’s in Your Milk? published in 2006, “This book is a unique resource on rBGH milk. It presents Dr. Epstein’s trailblazing scientific publications since 1989, which have played a major role in influencing other nations, including Canada, 24 European nations, Norway, Switzerland, Australia, New Zealand, and Japan to ban rBGH milk.

“Epstein details evidence of interlocking conflicts of interest between Monsanto and the White House, the American Medical Association and American Cancer Society. He also details evidence of Monsanto’s white collar crime; the suppression and manipulation of information on the veterinary and public health dangers of rBGH milk; and evidence of Monsanto’s “Hit Squad,” which attempted to stifle and discredit him.” (Arizona Center for Advanced Medicine)

Dr Epstein accused Monsanto and the FDA of making a “blatantly false claim” that BGH milk is indistinguishable from natural milk, He accused the FDA of  “classic gerrymandering of data bordering on the criminal.”  (Criminal Indifference of the FDA to Cancer Prevention: An Anthology… 1994-2011, Edited by Samuel Epstein, MD, 2014)

In 1991, the American Medical Association Council on Scientific Affairs raised safety concerns: “Further studies will be required to determine whether ingestion of higher than normal concentrations of bovine insulin-like growth factor is safe for children, adolescents, and adults.” (The Washington Post, 1994)

“This is a drug no one wants except the companies who make it, a tiny minority of dairy farmers and those who benefit from having a surplus of raw commodity–I’m sorry to say the dairy processing industry. It seems pointless to use questionable technology for something consumers don’t want…” (BGH Dilemma: Do We Need More Milk? Los Angeles Times, 1993)

August “Gus” Schumacher, an agricultural economist with a long and distinguished career at the World Bank, as an undersecretary at the USDA in the Clinton Administration, and as commissioner of the Massachusetts Department of Food and Agriculture, told a reporter, after examining a long technical analysis of BGH, that rBST was “crack for cows.” (12 Degrees of Freedom, 2007)

FDA has continued to accept Monsanto’s dubious claims and dubious science.
In an update report of its 1989 BGH review (dated, 2009, posted here) FDA reaffirms its irresponsible and untenable position:

“Oral toxicity studies of longer duration [longer than a 90 day rat study] are not necessary because rbGH levels found in the milk of rbGH-treated cows is not significantly biologically available…FDA finds no definitive evidence of any direct link between IGF-1 breast cancer…FDA has been advised that there is no substantive evidence that IGF-1 causes normal breast cells to become cancerous.

“It bears repeating that the assumptions that milk levels of IGF-I are increased following treatment with rbGH and that biologically active IGF-I is absorbed into the body are not supported by the main body of science. ”

It includes the following bizarre explanation for concealing the rat study: “The 90-day study was not included in the Freedom of Information (FOI) study because it was not a pivotal study.”

USDA led by Monsanto’s agent uses heavy-handed legal suppression
When some dairy companies labeled their milk products as free of bovine-growth-hormones (BGH), Monsanto objected claiming that such labeling put its milk product (brand name Posilac) in an unfavorable light. Michael Taylor moved to the USDA in 1994, and urged the Federal Trade Commission and state governments to make it illegal for dairies to make any claim about their BGH-free products. Taylor wrote an FDA guidance document (1994) requiring any label describing a product as BGH-free to also include the statement:

“The FDA has determined … no significant difference has been shown between milk derived from [BGH] and non-[BGH] supplemented cows.”

Although this statement was unsupported by the scientific and empirical evidence, it carried the authority of the FDA which Monsanto used to lobby state governments to make it illegal for dairies to label their products as rbGH-free, and to sue U.S. dairy farmers who labeled their milk as rBGH-free. An example is the suit against Oakhust Dairy in Maine for stating in its milk product labels: “Our Farmers’ Pledge: No artificial hormones.” That suit was settled in 2007. (Read more: “Monsanto v. Oakhurst Dairy,” Reclaim Democracy, 2007)

In 2008, Monsanto sold its Posilac milk (sBST, rBGH) rights for $300 million to Eli Lilly, the pharmaceutical company that manufactures the drugs: Evista which is promoted as reducing the risk of breast cancer; and antibiotics which are needed to treat sickened cows whose milk is contaminated with pus after being injected with rBGH. (Read more: “Is Eli Lilly Milking Cancer by Promoting and Treating It?” Huffington Post, 2011)

“There is a BIG difference in the milk from drugged cows. Its got more of the hormone IGF-1, which is correlated with a much higher cancer risk. The milk has lower nutritional quality. And because injected cows often get udder infections, the milk has more pus and antibiotics.”

Instead, the FDA accepted Monsanto’s Objection to the labeling statements by some dairy companies that their products were “free of bovine-growth hormones, BGH). FDA requires all labels on non-genetically engineered milk products to include the following statement: “The FDA has determined that no significant difference has been shown between milk derived from cows given [rBGH /rBST] and non-[BGH] supplemented cows.” This specious FDA claim has been overruled by a federal Court of Appeals decision in Ohio (2010). This landmark decision explicated in 30-pages by two Circuit Judges declared that: 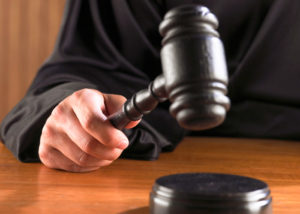 “FDA’s finding that there is no measurable compositional difference between the two [milk products] is belied by the record which shows that… a compositional difference does exist between milk from untreated cows and [rbST-treated] milk…the use of rbST in milk production has been shown to elevate the levels of insulin-like growth factor 1 (IGF-1), a naturally-occurring hormone that in high levels is linked to several types of cancers, among other things.”

“…Certain studies indicating that rbST use induces an unnatural period of milk production during a cow’s “negative energy phase.” According to these studies, milk produced during this stage is considered to be low quality due to its increased fat content and its decreased level of proteins… Taken collectively, this evidence points to two distinct types of milk…The composition claim “rbST free” is therefore demonstrably true as applied to this milk.” (International Dairy Foods Association; Organic Trade Association v Boggs, Ohio Director of Agriculture, September, 2010)

The Ohio decision fundamentally undermined FDA’s rationale for its failure to adhere to the precautionary principle when approving genetically engineered new foods, as required under the US Food Additive Amendment (1958) of the Food Drug & Cosmetics Act (21 USC Sec. 321). FDA officials, Monsanto, and the proponents of the “no compositional difference” rationale, have remained silent about this decision — which no one has appealed. (“Court Victory,” Huffington Post, 2010)

The American Cancer Society whose anti-cancer recommendations generally favor the biotechnology industry with whom it is aligned; acknowledges on its website, the potential risk of cancer posed by BGH milk products.

“The available evidence shows that the use of rBGH can cause adverse health effects in cows…cows treated with rBGH tend to develop more udder infections (mastitis) [and] these cows are given more antibiotics than cows not given rBGH…milk from rBGH-treated cows has higher levels of IGF-1, a hormone that normally helps some types of cells to grow. Several studies have found that IGF-1 levels at the high end of the normal range may influence the development of certain tumors.

Some early studies found a relationship between blood levels of IGF-1 and the development of prostate, breast, colorectal, and other cancers… While there may be a link between IGF-1 blood levels and cancer, the exact nature of this link remains unclear… At this time, it is not clear that drinking milk, produced with or without rBGH treatment, increases blood IGF-1 levels into a range that might be of concern regarding cancer risk or other health effects…More research is needed to help better address these concerns.”(American Cancer Society,  2014)