At Shark Island, which even German soldiers called “The Death Camp” Dr Bofinger conducted dubious racially motivated medical experiments. In one specious bid to determine whether scurvy, an illness caused by vitamin C deficiency, was contagious, he injected prisoners with arsenic and opium. According to German medical statistics, 778 autopsies were conducted in the concentration camps in one year.

“Thousands of Namibian bodies were prepared with horrific efficiency by women often related to the deceased, and shipped to scientists in Germany’s schools and universities. Articles published in German medical journals referred to Africans as Untermenschen — subhumans.

According to German medical statistics 778 autopsies were conducted in the concentration camps in one year. Eminent anthropologist Eugen Fischer went to South West Africa to study the phrenology of the Herero and the Nama. Phrenology was a fauxscience that believed mental and psychological characteristics were indicated by head shape.

It was truly skulduggery. More than 3,000 skulls of Herero and Nama were sent to German universities for experimentation; in some cases Herero women were made to boil, and clean with broken glass, the specimen heads of their own people. n Germany the skulls were used to prove the similarity between the Nama and anthropoid apes.” (Daily Express, Jan. 2014)

South West Africa became one of the first major laboratories where Darwinian theories of race supremacy were experimentally applied. Eugenic investigations by anthropologist, Eugen Fischer who became the leading racial hygienist under the Third Reich, laid the foundation for ideas of hereditary ‘inferiority.’ He advocated genocide of black Herero Africans whom he defined an “inferior race.” During the Herero genocide, Fischer came to the colonial concentration camps to conduct medical experiments on race. He subjected Herero prisoners to experimental sterilization, injections of smallpox, typhus and tuberculosis. And he subjected 310 Herero children and mixed-race mulatto children of Herero women and German men as test subjects, calling them “Rehoboth bastards” of “lesser racial quality.”

They were subjected to numerous racial tests such as head and body measurements, eye and hair examinations and concluded that mixed-race children were inferior, but useful for low-level administrative state positions such as, policemen and postal service employees. Fischer’s experimental procedures were part of a wider history of abusing Africans for experiments, and echoed earlier German anthropologists who had stolen skeletons and bodies from African graveyards and took them to Europe for research or sale.

Fischer’s medical experiments can be seen as a testing ground for later medical procedures used during the Nazi Holocaust. Fischer’s book, The Principles of Human Heredity of Race Hygiene,” was read by Hitler when he was in prison. Fischer later became chancellor of the University of Berlin, where he taught medicine to Nazi physicians. Otmar Freiherr von Verschuer was a student of Fischer, Verschuer himself had a prominent pupil, Josef Mengele. 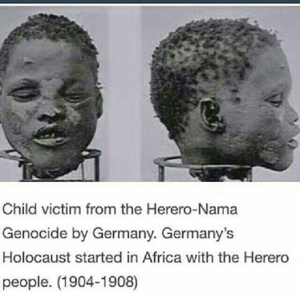 Ben Kiernan, the director of the Genocide Studies Program at Yale University, pointed out that Eugen Fischer was not the only person who took part in both genocides. Franz Ritter von Epp, who took part in the Herero genocide, became governor of Bavaria; and was responsible for the liquidation of virtually all Bavarian Jews and Gypsy Roma. (Kiernan, Blood and Soil, a World History of Genocide and Extermination from Sparta to Darfur, 2007)

“A German soldier found a little baby boy about nine months old lying in a bush. The child was crying.  The soldiers formed a ring and started throwing the child to one another and catching as if it were a ball…one soldier fixed his bayonet on his rifle and the child was tossed into the air towards him. As it fell he caught it and transfixed the body on the bayonet…the incident was greeted with roars of laughter by the Germans..” (Worse Than War: Genocide, Eliminationism, and the Ongoing Assault on Humanity, 2010)

The skulls of 20 Namibians remained in German archives until September, 2011; fifteen were men, 4 women, and 1 skull from a boy.  (BBC News). An official delegation from Namibia traveled to Germany to recover these remains and return them to formal burial in their home country. The reception of this delegation was deeply controversial, causing new tension between Germany and its former colony, and revealing existing problems in both countries. (Germany’s Namibian Legacy by Orlando Reade, April, 2012)

In 2015, Germany officially recognized that the atrocities committed towards the Namibian people constituted genocide. In July, 2016, the German government apologized and acknowledge that the colonial-era mass murder by German troops of the Herero tribes in Namibia was “genocide”. “We Germans accept our historic and moral responsibility and the guilt incurred by Germans at that time. The atrocities committed at that time would have been termed genocide.” (The Guardian, August 2004)

US Court District Court in New York Hears the Case Against Germany, Al Jazeera, July 2018
Lawyers for the Herero and Nama people and lawyers for the German government presented arguments. Although German politicians have acknowledged the genocide in public statements in recent years, Germany’s motion to dismiss the case states: “the legal concept of genocide does not apply in this case.”

“All we are asking for is restorative justice for the genocide. All we want is for there to be a jury who can weigh the preponderance of the evidence.”

Additional Sources about the Herero genocide:

“A Brutal Genocide in Colonial Africa Finally Gets its Deserved Recognition” by Daniel Gross, Smithsonian Magazine, Oct 2015
Colonial Crimes: Past and Present –Germany by Dr. Abdullah Robin, Khilafah.com Dec 2015
German Colonialism: A Short History by Sebastian Conrad, 2011
Germany’s Genocide of the Herero by Jeremy Sarking 2011
Germany’s Namibian Legacy by Orlando Reade, April, 2012
History, Memory, And Commemorations: On Genocide And Colonial Past In South West Africa by Silvio Marcus de Souza Correa, Revista Brasileira de História, 2011
Hitler’s Black Victims: The Historical Experiences of European Blacks, Africans and African Americans During the Nazi Era by Clarence Lusane (2002)
Southwest Africa to the Third Reich by Elizabeth Baer, 2017
The Third Reich in History and Memory by Richard Evans, 2015
Why the Herero Of Namibia Are Suing Germany for Reparations by Daniel Gross, National Public Radio, May 2018
Worse Than War: Genocide, Eliminationism, and the Ongoing Assault on Humanity, 2010