Was Germany’s Colonial Genocide in Africa a Precursor of the Nazi Holocaust?

Legacy of Genocide Lingers on for Nama in Namibia, Deutsche Welt (2017)

For decades, Germany’s colonial history was of no interest, as it was relatively short-lived (1884 –1919) and was viewed as unremarkable. Scholars ignored the influence that Social Darwinists and eugenicists had in late-19th-century; creating new values of totalitarian dominance modeled on Darwin’sOn the Origin of Species, with its brutal account of nature as a competitive violent struggle for survival. Germany applied these values brutally in the African colonies. 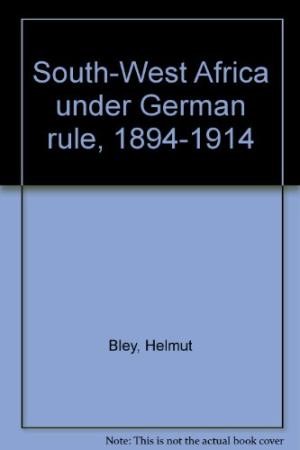 South-West Africa Under German Rule, 1894-1945 by Helmut Bley published in German in 1968, documented the racially-motivated genocide (1904 – 1907) against the indigenous local population – the Herero and Nama cattle raising tribes – who rebelled against German colonial expropriation of their grazing lands in South West Africa (today’s Namibia).

In 1904, Germany adopted a racist policy in its colony, issuing an edict that introduced a new German legal concept – Rassenschande (racial defilement). The edict banned intermarriage between German colonists and Africans. This policy was followed by a racial policy of annihilation —Vernichtung – a decade before World War I.

In 1904, about 150 German settlers were killed during the Herero uprising, though (as historian Peter Gay noted) “gallantly enough, they spared women, children, and other foreigners.” The German response did not spare Herero women and children. General Lothar von Trotha, a hard-line Prussian army officer was in charge. He called the insurrection, “the beginning of a racial struggle” and led 10,000 to 14,000 troops; his stated goal was the extermination of the Herero nation:

“It was and is my policy to use force with terrorism and even brutality. I shall annihilate the revolting tribes with rivers of blood and rivers of gold. Only after a complete uprooting will something emerge.” (Rivers of Blood, Rivers of Gold by Mark Coker, 2001) [Another translation: “I know that African tribes yield only to violence. To exercise this violence with crass terrorism and even with gruesomeness was and is my policy.” (Richard Evans, The Third Reich in History and Memory, 2015)

After defeating the Herero force at Waterberg, Trotha announced that any Herero “found inside the German frontier, with or without a gun or cattle would be executed.” Herero cattle-herders caught in the action were killed on the spot; women and children were driven into the desert to die of starvation; he even ordered their waterholes to be poisoned.

Protests from religious factions in Germany led to a change in policy; the natives were driven into ‘concentration camps’ — Konzentrationslager — where they were brutalized and starved as slave laborers. The estimated Herero population was reduced from 80,000 to 15,000; and of the 20,000 Nama tribe only 10,000 survived. There was a backlash and Trotha was recalled to Germany in 1905.

Notwithstanding the protests, the official German General Staff publication, Der Kampf, referred to  Trotha’s campaign  of “extermination of the Herero nation” as a “brilliant” accomplishment. After the war, colonial rule imposed travel restrictions and all native peoples above the age of seven were required to wear a metal disc with a numbered identification. Bley documented this racially motivated genocidal massacre (1904-1907), noting that eugenics was invoked as its justification. He suggested that the Herero/Nama genocide was the prototype for the Holocaust.

The 1960s was an era bent on denial and forgetting; it has been described as “the Great Silence” a time when no German was interested in delving into atrocities committed by the German government– not the Jewish Holocaust, nor the one in the former African colony. So the question of comparisons remained unaddressed until the 1990s.

When interest in German colonial history was revived in the 1990s, colonial origins of racial science and the history of Germany’s colonizing experience suddenly seemed irrelevant to historians of the Nazi era. Bley’s book was re-issued in 1996 in a revised, English language edition (Namibia Under German Rule) and numerous books and articles have since been written about the politics of race, which figured prominently in German colonialism in South West Africa and East Africa. German colonists imposed a totalitarian regime on the cattle-raising tribes, Herero and Nama, modeled on Darwin’s Origin of Species and the belief that the natural order is a competitive violent struggle for survival of the fittest.

Between 1904-1908, the Herero and Nama tribes were slaughtered; thousands were shot and thousands more were herded into Konzentrationslager— “concentration camps” (the first official German use of the term) —where they were starved, brutalized, and worked to death. At Shark Island – known as a “death camp”– prisoners were used in gruesome scientific experiments. their severed heads were measured and cataloged by German anatomists and physical anthropologists. Foremost among these was anthropologist/ eugenicist  Eugen Fischer, the director of the Kaiser Wilhelm Institute of Anthropology. He sought to prove the superiority of the Aryan race – both in SW Africa and later as the leading ‘racial hygienist’ under the Third Reich. At least 300 skulls were shipped to Germany for further research. 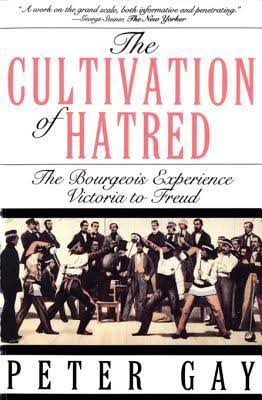 Viewed from the prism of eugenics, the fittest (Aryan race) survived while black people were born to be mastered by the fittest. The Kaiser’s race engineers used callipers and craniometry charts to measure the severed heads of Nama tribesmen; their ears and feet were considered “apish” telltale atavisms. Zoologist Leopard Schultze noted that taking “body parts from fresh native corpses was a welcome addition.” An estimated 300 skulls were sent to Germany for experimentation; many from concentration camp prisoners.

Historians emphasize the fact that while other colonial occupiers were brutal, German racism was extreme; in 1905, it entered German legal terminology – Rassenschande (racial defilement) – when marriage between German colonists in South Africa and Africans was banned. The eminent British historian, Richard Evans noted that:

“Only the Germans introduced concentration camps, named them as such and deliberately created conditions so harsh that their purpose was clearly as much to exterminate their inmates as it was to force them to work. (It would be left to the Nazis to devise the chilling term ‘extermination through labour’.)

Only the Nazis mounted an explicit attempt to exterminate an entire colonized people on racial grounds. Only the Germans legally banned intermarriage in their colonies. Only Germans subsequently mounted a campaign of racial extermination on a global scale which encompassed not only Europe’s Jews but also, potentially, the Jewish inhabitants of the rest of the world. Was there a connection between the two?” (Evans, The Third Reich in History and Memory, 2015)

In an article by Benjamin Madley in European History Quarterly (2005) examined how genocidal rhetoric, war of annihilation, and the use of concentration camps were transmitted across time and adopted by the Nazis. He examines Germany’s colonial Lebensraum and Vernichtung (annihilation) policies within the context of equally brutal European colonial actions, but notes distinguishing features. 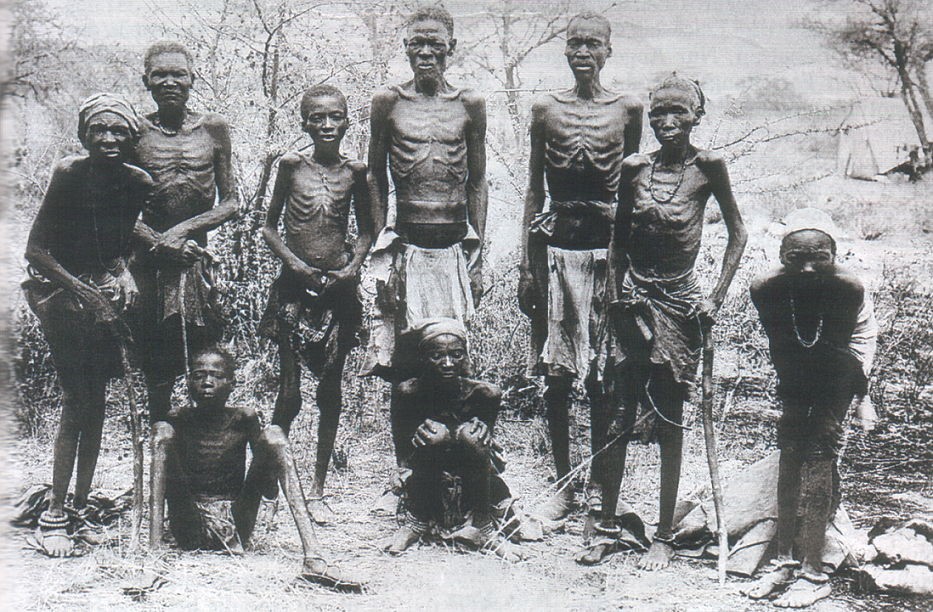 “What distinguishes the German South West African genocide from most other colonial mass murders is the fact that the Germans in colonial Namibia articulated and implemented a policy of Vernichtung, or annihilation…German South West African colonists pioneered the implementation of a Weltanschauung, later adopted by the Nazis, in which superior Germans ruled over sub-human non-Germans with brutality and slavery. This paradigm provided new ideas and methods for Nazi colonialism that were transferred to Germany and to future Nazis … Hermann Göring, Eugen Fischer, and Franz Ritter von Epp served as human conduits for the flow of ideas and methods between the colony and Nazi Germany.

German South West African race laws provided legal concepts later applied by Nazi lawmakers. As in the colony, “Mischlinge’ became a topic of concern in the Nazi Justice Ministry while both the 1935 Defense Law prohibiting soldiers from marrying ‘persons of non-Aryan origin’ and the Nuremberg Laws criminalizing marriage and sex between Jews and ‘Aryan’ Germans were simply variants of German South West African laws against interracial marriage and cohabitation.” (Madley. “From Africa to Auschwitz: How German South West Africa Incubated Ideas and Methods Adopted and Developed by the Nazis in Eastern Europe” European History Quarterly,2005)

“After beating the Herero in the battle of Waterberg, Trotha drove the survivors into the pitiless Omaheke desert with the intention they should die from thirst and starvation. Waterholes were poisoned by “cleansing patrols” of the Schutztruppe, the colonial army, to prevent the Herero from using them.

In Berlin the German general staff publicly lauded Trotha for his “extermination” measures. By 1905 Herero fugitives still alive in the Omaheke were too weak to do anything but surrender. They were rounded up, put into cattle wagons and sent by train to concentration camps, where they became slave labour for the colony’s new railways.

Women were systematically raped by Schutztruppen, the incidents turned into photographs by the new-fangled Kodak roll-fill camera. The pictures were then sent as pornographic postcards to Germany…     (Daily Express, Jan. 2014)