A case in point is a British study, of chronic fatigue syndrome called PACE; a randomized, controlled randomized trial – the purported “the gold standard” of medical research – was published in the prestigious journal, The Lancet in 2011.

“researchers announced that PACE, the largest treatment trial in the history of chronic fatigue syndrome, had been a great success. That seemed like great news since there is no known cure for this devastating disease that affects over a million people in the United States alone, including Laura Hillenbrand, the best-selling author of Seabiscuit, and jazz pianist Keith Jarrett.

Exercise and psychotherapy, the researchers said, can significantly improve and sometimes cure chronic fatigue syndrome (CFS), which is also sometimes called myalgic encephalomyelitis (ME). Headlines announced the study finding around the world; it was simple, as The Independent wrote, “Got ME? Just get out and exercise, say scientists.”

The claimed findings of the PACE trial were widely covered in the news media:

What’s worse, is that the claimed PACE findings influenced public health recommendations around the world. The CDC  the British National Health Service, the Mayo Clinic, and Kaiser all recommend cognitive behavioral therapy and exercise for ME/CFS, as do.

However, the patients who suffer from the disease recognized that the recommendations were absurd because the claimed findings and treatment recommendations that resulted from those claimed findings shifted chronic fatigue into the realm of a mental illness rather than a physical illness. Patients recognized that the PACE program could actually be harmful to them by encouraging too much exercise. 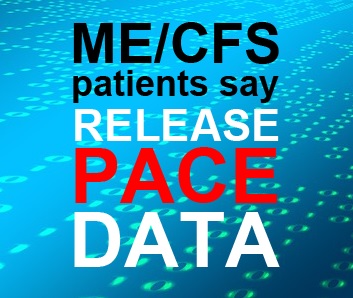 “The finding struck many ME/CFS sufferers as preposterous—and their concerns about the way the trial was designed and conducted, after long being dismissed, were suddenly supported in a recent investigative tour de force by David Tuller, academic coordinator of UC Berkeley’s joint masters program in public health and journalism. In response to his investigation, six scientists from Stanford, Columbia, and elsewhere sent an open letter to the editor of The Lancet demanding a fully independent investigation into the trial.

After three months with no response from The Lancet, the letter was republished with 42 signatures. After that, The Lancet editor, Richard Horton, emerged from witness protection and invited the group to submit a letter about the concerns for publication. The study is under increasing scrutiny by scientists and science writers about whether its conclusions are valid.

The question of how all this happened and how the criticism is being handled have sent shockwaves through medicine. The results from PACE (including these) have been published in prestigious journals and influenced public health recommendations around the world; and yet, unraveling this design and the characterization of the outcomes of the trial has left many people, including me, unsure this study has any scientific merit. How did the study go unchallenged for five years? And how could journalists have recognized the problems before reporting unqualified, but unjustified, good news?

There were problems with the study on almost all levels, but our goal in this piece is to examine a critical issue that is increasingly being talked about in academic research but less so in the news media, due to its complexity: study design.” (Read Rebecca Goldin, PACE: The Research That Sparked a Patient Rebellion and Changed Medicine, STATS.org, March 2016)

A re-analysis of the evidence by the Agency for Healthcare Research and Quality (AHRQ) found insufficient evidence for the claimed findings. AHRQ revised its original conclusions (2014) and downgraded the effectiveness of cognitive behavioral therapy (CBT) and graded exercise therapy (GET). The Queen Mary University of London had refused to release the original data for independent re-analysis with specious arguments such as, upsetting patients, when in fact patients were among the 12,000 people who signed a petition to release the data, noting “the public interest significantly outweighs the overstated risks.”

The case of GSK Study 329:
Much has been written about the protracted battle for the data of GlaxoSmithKline’s notorious Paxil pediatric trials, published in Journal of the American Academy of Child and Adolescent Psychiatry (JAACAP) in 2001. The revised analysis of the original findings was published — after much delay — in the BMJ in 2015. (Read BMJ Press Release and read about the trials and tribulations of getting the re-analysis published Restoring Study 329)