Newborn Infants Are Being Poisoned by Vaccine-Contaminated Mothers’ Milk 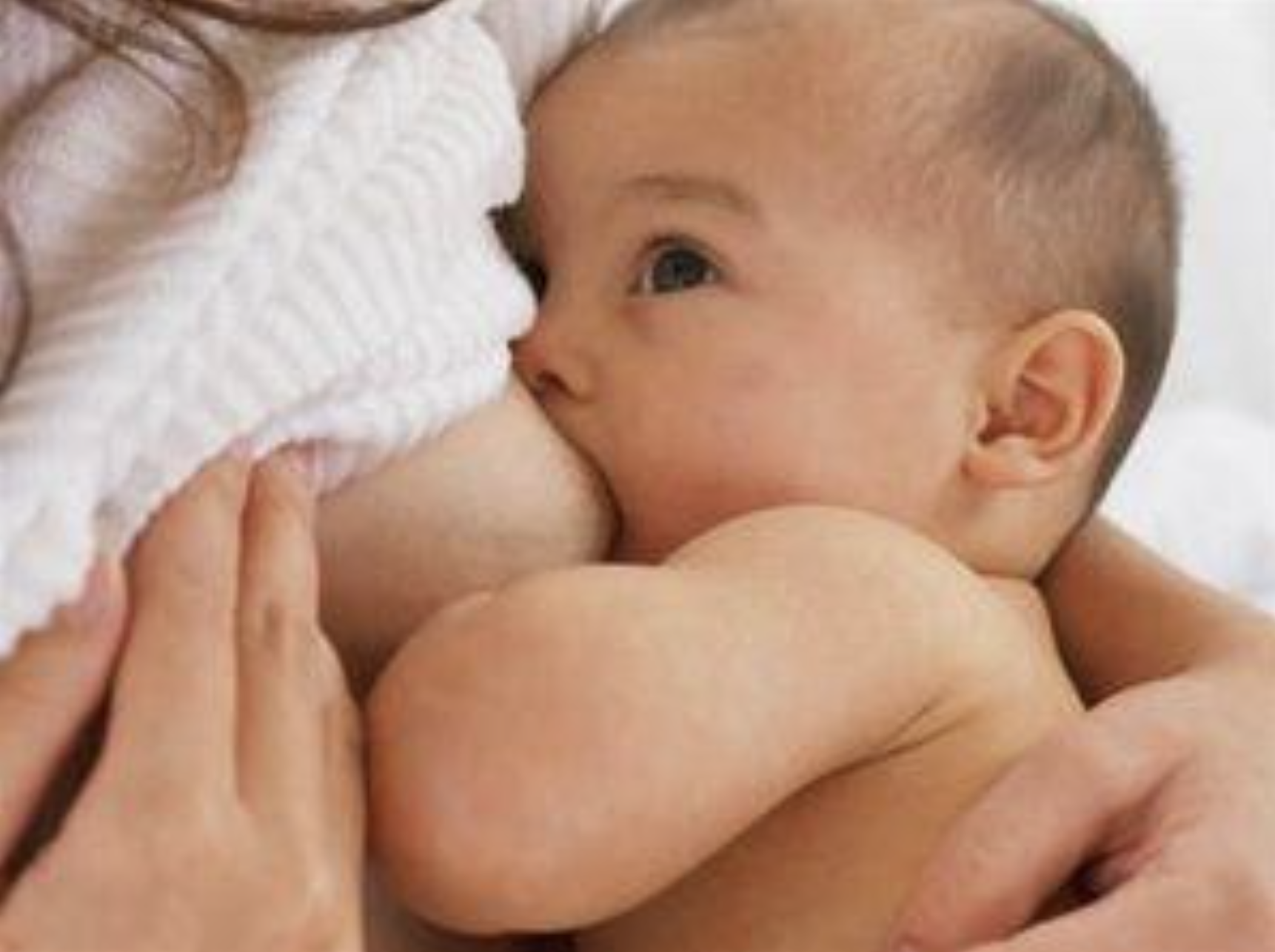 The wonders of mother’s breastmilk continue to amaze scientists.
“Mother’s milk is a comestible marvel. It’s packed with nutrients and other benefits for babies’ health. A steady stream of research has linked breastfeeding to lower risk of infection, obesity, diabetes and respiratory disease in infants.”  Unravelling the mysteries of microRNA in breast milk (NATIRE, 2020)

An examination of the clinical, real-life evidence refutes one after another of the false “safe and effective” claims made about the experimental Covid-19 injections. However, nothing prepared the world for the medical directives that deliberately misinform women and urge them to  expose their unborn and newborn infants to injury and death.

Despite the lack of adequate safety studies, government officials and their partners in Pharma, medical institutions, and high profile academics embarked on an aggressive Covid-19 vaccination campaign.

Evidence of harm suffered by breastfed infants whose mothers received a Covid-19 injection.

The Israeli analysis was prompted by the fact that more than a year and a half passed, and millions of breastfeeding women around the world have already been vaccinated; yet, “the health implications of the mRNA vaccine on nursing babies are almost never considered or discussed”.

Bear in mind that the voluntary VAERS database only represents between 1% and 10% of actual cases of harm. In most of the 648 reported cases, several life-threatening side effects were recorded in the same baby.

In one case, a mother reported losing her 5-month-old infant 13 days after receiving the Pfizer COVID-19 vaccine on Jan. 28, 2021, and breastfeeding him. After being rushed to the hospital, “doctors were able to get his heart beating again with excessive effort. Organ damage was extensive and he had no brain function; he did not recover.” In another case report, dated March 17, 2021, a 5-month-old died just one day after his mother was vaccinated.

The researchers state that most pregnant (97.6%) and lactating (96.0%) women reported no obstetric or lactation concerns after vaccination. Most concerning is the utter lack of concern about the infants – whose welfare is ignored entirely.

“This study was determined to be exempt from institutional review board review under Common Rule category 2 by the University of Washington Human Subjects Division.”

It is truly chilling to note that the researchers avoided entirely examining the effect of the boosters on the infants involved. Their focus was on whether women’s work was affected by the boosters.
The report mentions, but once; almost as an insignificant afterthought: “Among lactating individuals…121 reported any issues with their breastmilk-fed infant after vaccination.”

Instead, the researchers spun favorable findings to serve their financial sponsors:

“The findings of this cohort study suggest that COVID-19 boosters or third doses were well tolerated by individuals who were pregnant and lactating. Data on COVID-19 vaccine boosters are particularly important as vaccine uptake during pregnancy is lagging, and strategies to reduce vaccine hesitancy, increase vaccine acceptance, and help guide discussions between pregnant and lactating persons and maternal care professionals are needed.”

Read Igor Chudov’s dissection of the study which as he states: “the study was devoted to showing how safe Covid boosters are for pregnant and lactating women.” He also identified differences between the text and Table 2.

In addition to the funding from the National Institute of Allergy and Infectious Diseases, Women’s Reproductive Health Research and the National Institutes of Health, the lead investigators are
financed by vaccine manufacturers who have a direct financial interest in the publication of favorable Covid vaccine safety reports. 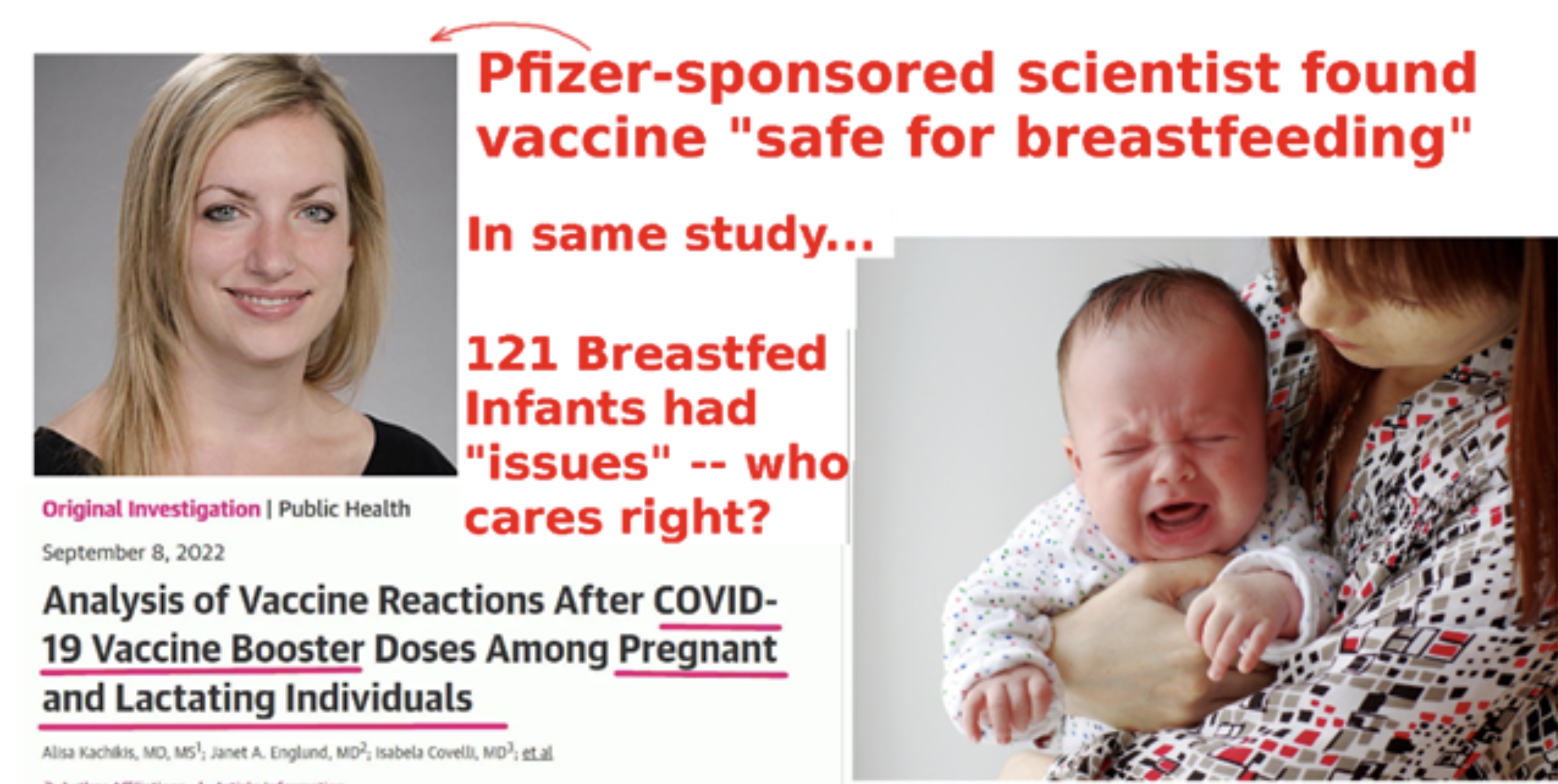 The authors of the study examined 11 “lactating individuals,” after getting either the Pfizer or Moderna mRNA shots. Nine of them were white, one black, and one Asian. Five of the participants “had detectable vaccine mRNA in their breast milk.”

The evidence shows that the Covid injections are contaminating breastmilk.

“These data demonstrate for the first time to our knowledge the biodistribution of COVID-19 vaccine mRNA to mammary cells and the potential ability of tissue EVs (extracellular vesicles) to package the vaccine mRNA that can be transported to distant cells. Little has been reported on lipid nanoparticle biodistribution and localization in human tissues after COVID-19 mRNA vaccination.

“caution is warranted about breastfeeding children younger than 6 months in the first 48 hours after maternal vaccination until more safety studies are conducted. In addition, the potential interference of COVID-19 vaccine mRNA with the immune response to multiple routine vaccines given to infants during the first 6 months of age needs to be considered. It is critical that lactating individuals be included in future vaccination trials to better evaluate the effect of mRNA vaccines on lactation outcomes.”

This study is discussed at length in this Epoch Times article: COVID Vaccines Contaminate Breastmilk With mRNA: Study By Enrico Trigoso, September 28, 2022 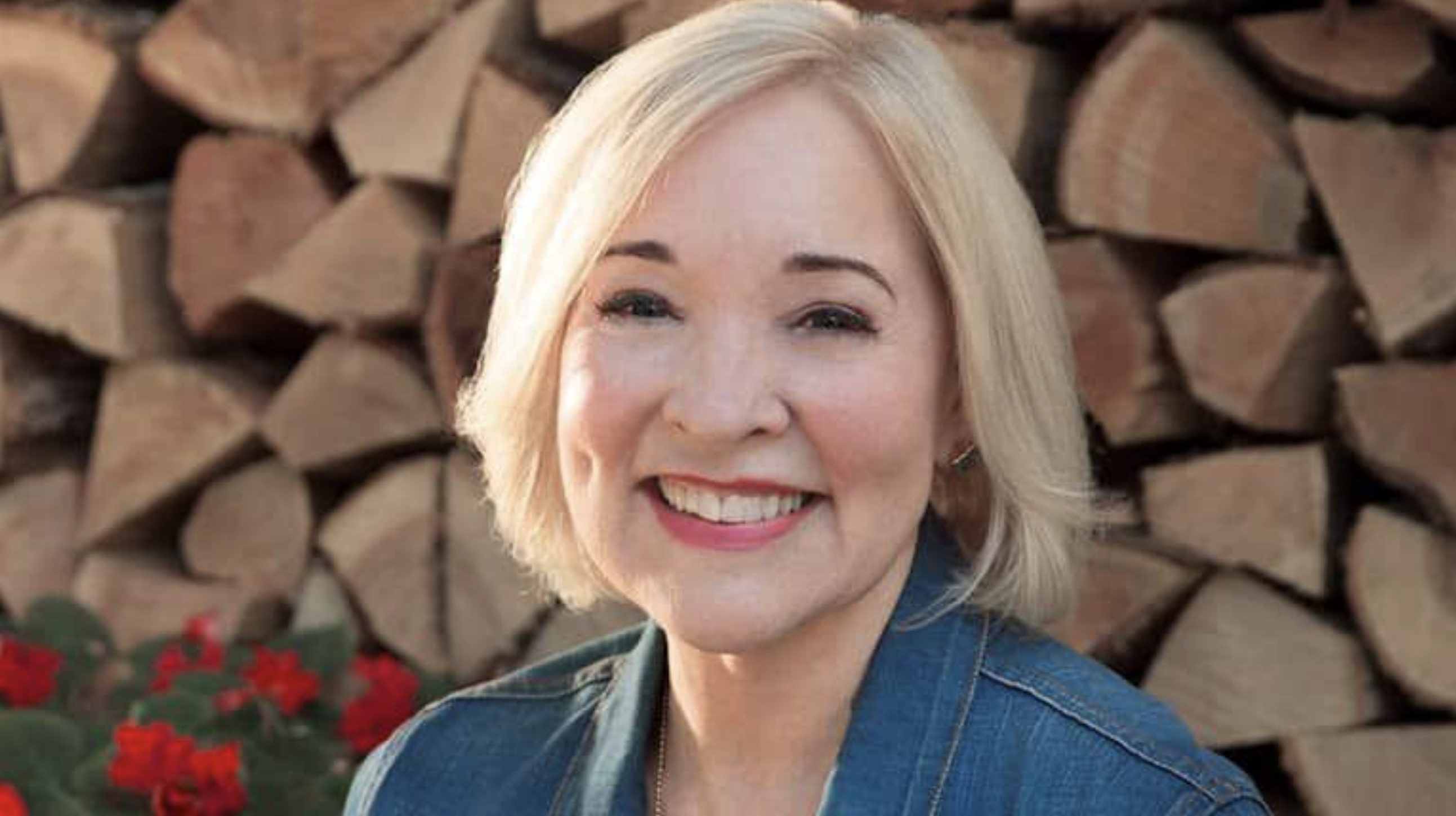 Dr. Christiane Northrup, a former fellow in the American College of Obstetricians and Gynecologists Northrup (and a member of the AHRP Distinguished Advisory Board) reminded doctors and public health officials:

The CDC and the medical establishment continue to urge pregnant and lactating women to take the Covid injections with knowingly false claims and outright lies: 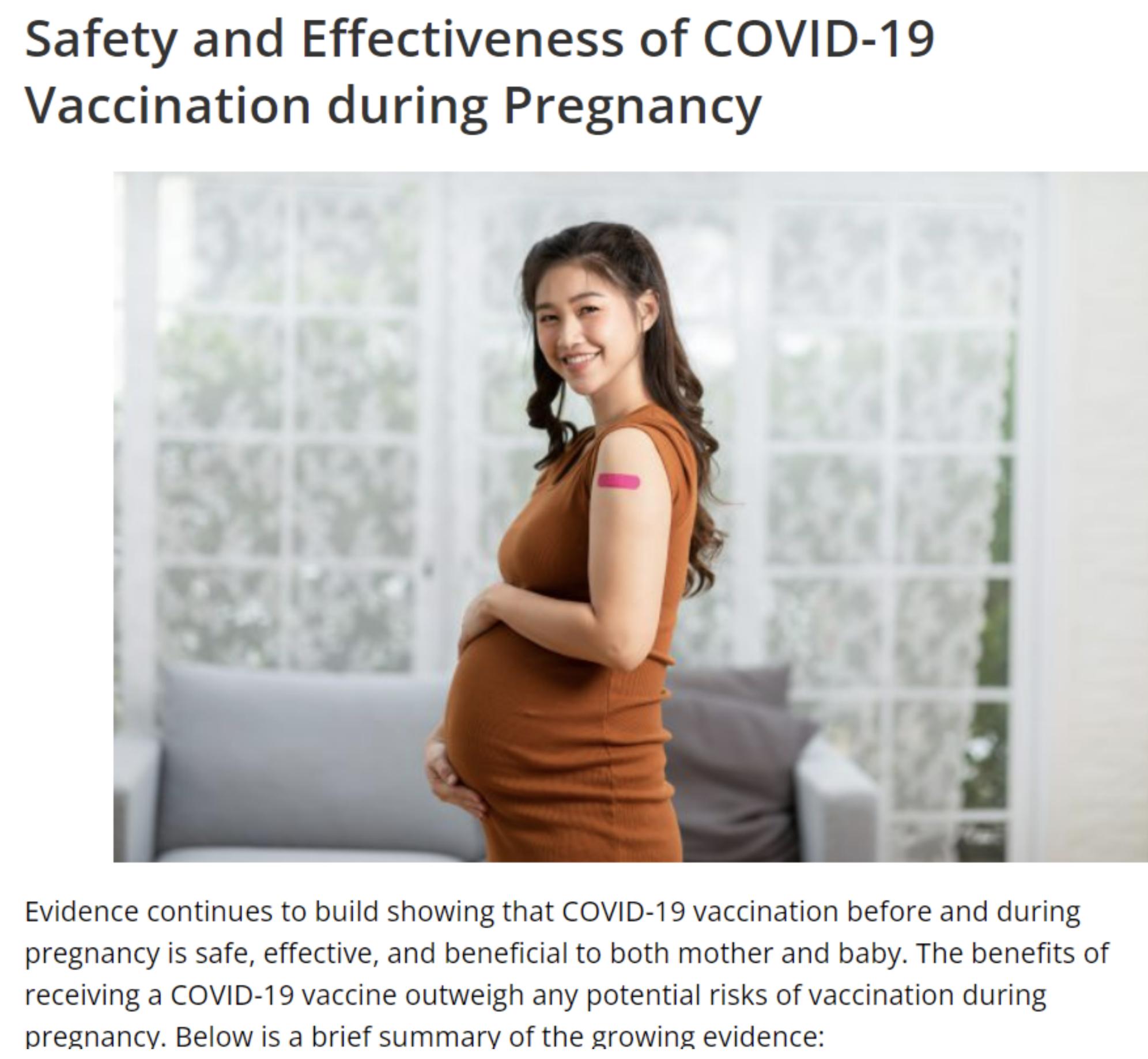 The CDC claims and recommendation are not backed up with any legitimate study showing a benefit vis-à-vis the serious risks. However, the CDC recommendation is widely echoed by the medical establishment and the obliging corrupt media.

Their recommendations are not to be trusted.
The aggressive Covid vaccination campaign is violating medicine’s precautionary principle – “First, do no harm” – as well as the moral and legal requirement under the 1947 Nuremberg Code which mandates full disclosure of risks and “Voluntary, fully informed consent.”

The vaccination campaign is led by corrupted, irresponsible, public health officials, medical institutions, and bought academics. It is worth noting that these high paid “authorities” have opted for the latest politically-correct obscenity that degrades women and motherhood. They no longer differentiate between men and women. They refer to gender-neutral meaningless terms such as, “pregnant people” and “breastfeeding people.”

As of Sept 23, 2022, the VAERS database recorded 4,486 cases of aborted pregnancies following COVID19 Vaccine. By contrast, during the 30 years prior to Covid-19 injections, there were 2,239 recorded deaths of unborn babies in VAERS.

Naomi Wolf Discusses Attempt Of The Global Health Community To Cover Up Their COVID Misinformation Sept 28, 2022 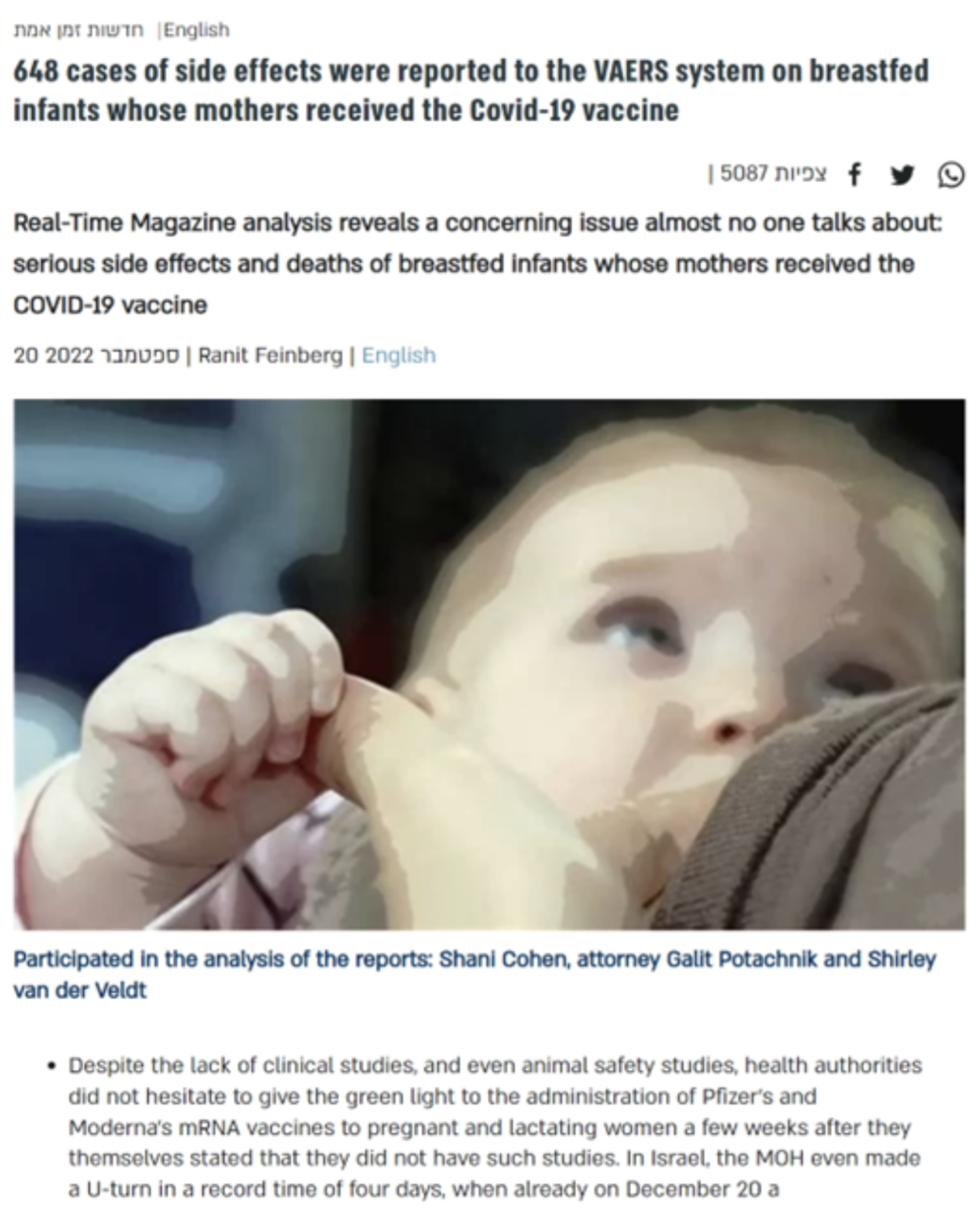 Endonuclease Fingerprint Indicates a Synthetic Origin of SARS-CoV-2  SARS-CoV-2 is the virus that caused the disease COVID-19.   END_OF_DOCUMENT_TOKEN_TO_BE_REPLACED