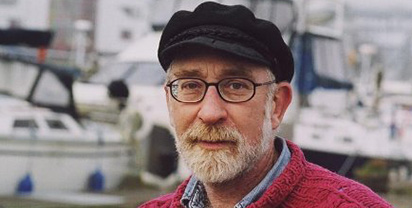 Tom Koch PhD, is among the best known, most prolific writers you’ve probably never heard about. An ethicist, writer, and researcher specializing in the care of the fragile, he holds a multi-disciplinary PhD (medicine, ethics/philosophy, geography) from the University of British Columbia. In Toronto he serves as a medical ethicist and consultant specializing in issues of chronic care as well as the study of the environmental and social determinants of endemic and epidemic disease.

His more than 15 books and 300 articles include the first books on elder care from the perspective of the caregiver. Beginning with Mirrored Lives (1990), he pioneered the use of narrative writing in gerontology. He was also the first to write extensively on the use of electronic data and public information. In medicine and medical cartography he is an authority on the history of maps in medicine and community health (Cartographies of Disease, 2005; Disease Maps: Epidemics on the Ground (2010)). 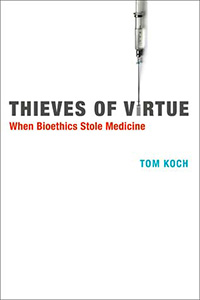 As a medical ethicist he is the author of both The Limits of Principle (2005) and Thieves of Virtue: When Bioethics Stole Medicine Cambridge, Mass: MIT Press, 2012. Koch is unflinching in his support for the Hippocratic Oath — “First, do no harm” — which, within bioethics circles, such a position is positively reactionary!

Below, Koch debunks the expertise of bioethicists; in Thieves of Virtue, he debunks “lifeboat ethics”, a false paradigm of scarcity which bioethicists apply to healthcare:

“Bioethicists are everywhere these days, commenting on abortion, euthanasia, and health policy. They people hospitals, major research centers, and advise governments. We need them, bioethicists tell us, because the old ethics of medicine won’t serve in the new world of advancing medical science and technology. They call that the “Georgetown Mantra,” the principle justification for their professional existence.

Their primary training is in philosophy, not biology, genetics, or medicine. Most are generally untutored in either social science or statistics. Bioethicists rarely work with patients. . . Since the expertise of bioethics is supposedly founded on an ethicists’ familiarity with philosophical methods and arcane texts, why think they have any expertise that may enlighten us all in the face of complex choices of care, of life and death?”

The foundation myth of bioethics, the “demi-discipline’s” self-professed raison d’etre is at best inadequate if not demonstrably false. Its grounding lies not, as bioethicists insist, in a robust ethic of care necessitated by new science and a failed Hippocratic sense of duty and care. Instead its origins and purpose demonstrably rest upon its service to the neoliberal, postmodernist economics that made health a commodity rather than a service.

Governments like those of Ronald Regan needed a way to say health care was an expense to be limited, a cost to be reduced. Bioethics provided the means by which officials could justify “rationalizing” the care of persons to fit the cost-cutting goals of government and, not coincidentally, to promote the needs of business.

Ethicists have been a guest in the house of medicine,” wrote Prof. Mark Kuczewski, a former president of the American Society of Bioethics and the Humanities, “and in order to survive in that environment have had to align themselves with money and power.” Bioethics isn’t about ethics or philosophy, truth or the “right,” but . . . money and power.

Koch points out that from Plato through Kant ethicists were critics; Until bioethics, the role of the ethicist was that of the outsider, the critic of the powerful, arguing for the needs and dignity of each of us within the communities we inhabit. Ethicists were never cheerleaders for money and power — as bioethicists are. Furthermore, Koch makes the point that bioethicists disregard the needs and rights of the vulnerable. He makes the point that while insisting they are champions of “autonomy,” and personal choice, the choices they propose are restricted, and often they willingly sacrifice the individual and his or her choices where those choices seem inconvenient, costly, or merely different.

Thus bioethicists promote a kind of consumerism — which is disastrous for both the patient and the medical professional who seeks to practice on behalf of patients. Bioethicists have reduced the patient-in-need to a health consumer whose care (as a “consumer”) depends, in large part, on his or her monies. As dangerously, some and perhaps many bioethics promote a eugenic present and future, pruning the human tree, as “rational” by which is meant cost efficient. . .